The expansion just registered its 7th birthday, but:

Even seven years after the recession ended, the current stretch of economic gains has yielded less growth than much shorter business cycles.

And this chart from Fox News shows how “undeveloped” the child really is. Some contractions are short and shallow, some are longer and deeper, but none was as long and as deep as the 2007-09 contraction. That one was also unique in that NGDP growth turned negative. Observe that until that point, the recession was nothing to call home about, but then we experienced the consequence of the greatest monetary policy error of the post war period.

The 1960-61 contraction was mild and stock prices remained flat but picked up before the trough. The ensuing expansion was long and robust. Notice, however that half way through, stock prices flattened. The reason is that inflation began an upward trend, following the faster rise in NGDP.

In the 1969-70 contraction, RGDP stayed put, but stock prices fell significantly. Inflation had become entrenched. The expansion phase was short, with the strong increase in NGDP guaranteeing that inflation kept rising, keeping a lid on stock prices. 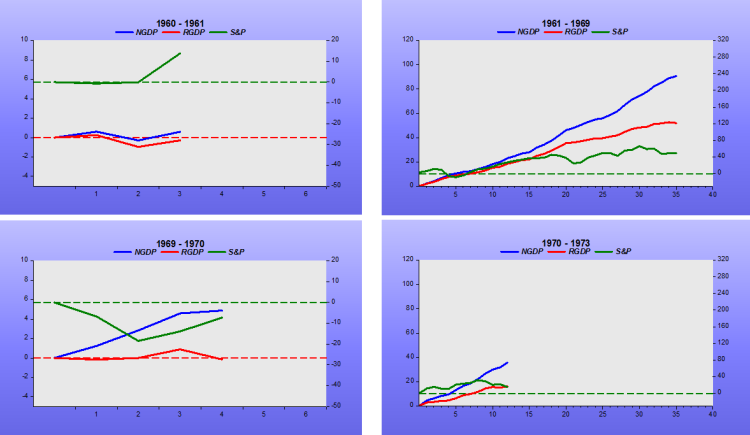 The 1981-82 contraction is the prototype demand shock recession. NGDP growth (and inflation) was brought down forcefully. Although real output fell by more than in 1973-75, stock prices dropped by much less and picked up before the trough.  The expansion was long and robust.  The 1987 stock crash did not affect real output growth. 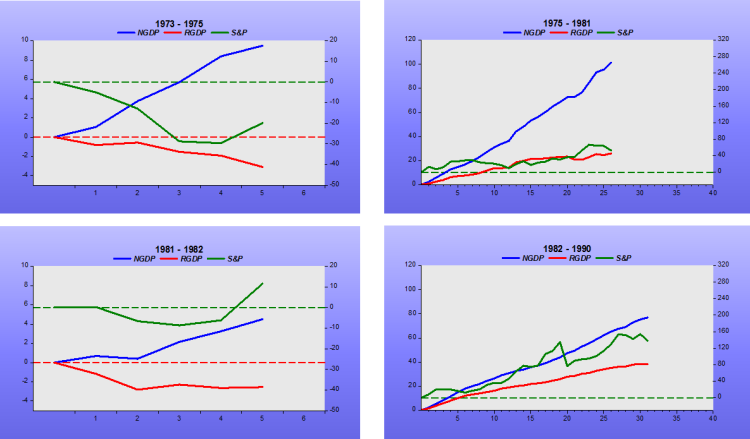 The 1990-91 contraction was short and shallow. Inflation was brought down to the 2% level. Stock prices were not much affected. This was followed by the longest expansion in US history. The consolidation of nominal stability that began in in previous expansion is behind the exuberance of stock prices.

In the 2001 contraction, real output didn´t fall at all. The drop in stock prices reflects the Enron et all balance sheet shenanigans. While in the expansion phase the behavior of real output and NGDP were similar to the previous expansion, stock prices were lackluster. The expansion was cut short, giving rise to the Great Recession.

The 2007-09 contraction was a different animal altogether, with things becoming much worse when NGDP tumbled. The strength of the expansion has been held back by a tight monetary policy, where NGDP, after falling substantially in the contraction phase, is growing at a much smaller rate than during the previous two expansions. Since the 2009 trough, stocks prices have shown a robust recovery, but that has petered out since mid-2014, when the Fed began the rate hike talk.

That may be the role of industrial production growth presented as YoY growth of the 6-month moving average.

Note that it only turns negative after a recession (as defined by the NBER) has already begun. Sometimes quite a way into the recession (as in the 1973, 1981 and 1990 recessions, for example).

In January the measure turned negative (-0.2) for the first time after the “recovery” was completed almost six years ago.

That´s just one more piece of evidence that goes against the grain of FOMC members, like John Williams who, in a speech yesterday (that sounded more like a “self-help” encounter) concluded:

Despite the Sturm und Drang of international and market developments, the U.S. economy is, all in all, looking pretty good. I still expect to see U.S. GDP growth of about 2¼% for 2016. I still expect unemployment to edge down to about 4½% by late in the year. And I still see inflation edging up to our 2% goal within the next two years. So I’m not down—it all looks good to me.

What to make of these trends? Do they justify the “recession mania” that is taking shape? 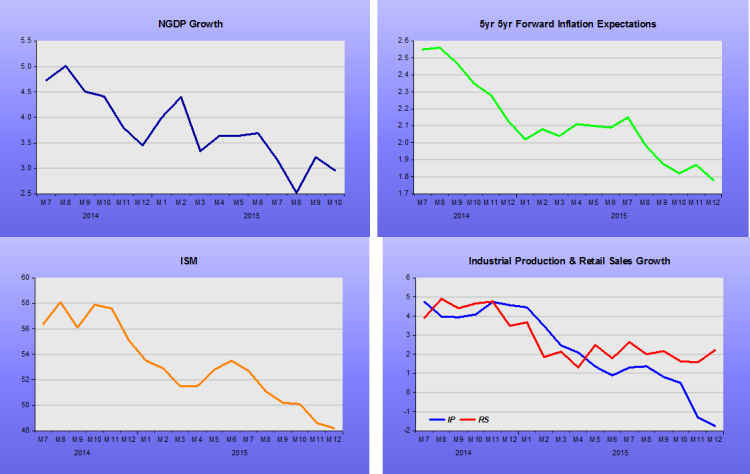 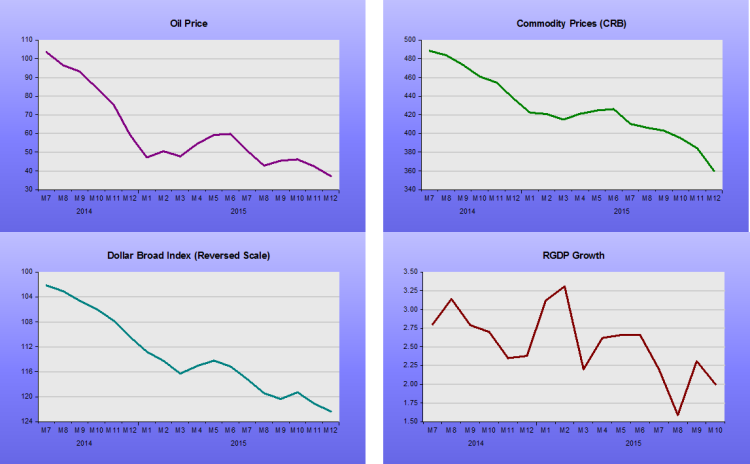 The Fed clings to the only thing that is not plunging!

That we have a basic, or minimalist, understanding of recessions:

Recessions are not about output and employment and saving and investment and borrowing and lending and interest rates and time and uncertainty. The only essential things are a decline in monetary exchange caused by an excess demand for the medium of exchange. Everything else is just embroidery.

Is that important? I believe so, since if that were widely understood it is doubtful that most developed economies would still be “rolling in the deep”!

Every time I see the chart for US unemployment these days it looks like it is time for the trend to turn.

Economies move in cycles and it sure looks like it’s time for this cycle to turn. Who will kill the current upswing? Well no-one will be responsible, these things are just cyclical, aren’t they?

Or is there a killer on the loose? The little red line is driving someone mad.

Even a well known dove appears to have given up the fight against a December rate rise. 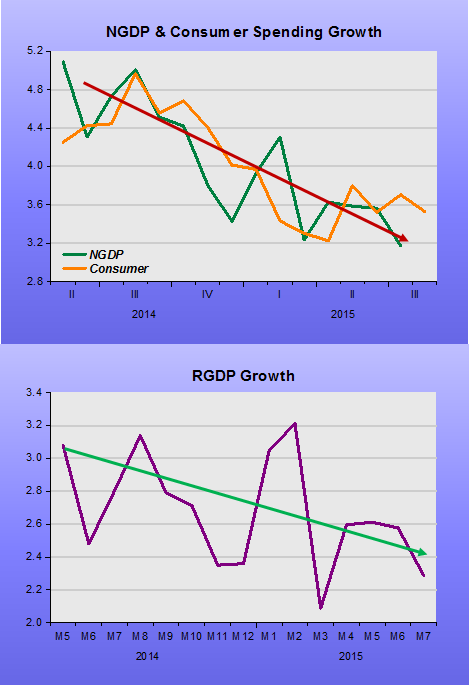 IF YOU want to know why the Federal Reserve is undershooting both its inflation target and its maximum employment mandate, cast your eye toward Jeremy Stein. Mr Stein is a Harvard economist and Fed governor. And since assuming his role at the Fed in 2012, he has led the intellectual charge within the Federal Open Market Committee to place more emphasis on financial stability as a monetary policy goal. For a glimpse of Mr Stein’s handiwork, have a look at his most recent speech, where he says:

I am going to try to make the case that, all else being equal, monetary policy should be less accommodative–by which I mean that it should be willing to tolerate a larger forecast shortfall of the path of the unemployment rate from its full-employment level–when estimates of risk premiums in the bond market are abnormally low. These risk premiums include the term premium on Treasury securities, as well as the expected returns to investors from bearing the credit risk on, for example, corporate bonds and asset-backed securities. As an illustration, consider the period in the spring of 2013 when the 10-year Treasury yield was in the neighborhood of 1.60 percent and estimates of the term premium were around negative 80 basis points. Applied to this period, my approach would suggest a lesser willingness to use large-scale asset purchases to push yields down even further, as compared with a scenario in which term premiums were not so low.

Mr Stein is effectively taking ownership of the Fed’s move toward tapering. Long-term unemployed Americans should address their letters accordingly.

There is something deeply askew about U.S. Federal Reserve policy statements and policies, and, indeed nearly the entire U.S. economics profession.

For example, a Richard Fisher (former Dallas Fed President and FOMC member), an Alan Meltzer or even a Martin Feldstein can go into sweat-drenched hysterics and predict hyperinflation holocausts, and be consistently wrong for years and years, yet still be VSPs.

But no one predicts lethal (to economic growth) deflationary recessionary vortices. I do. I guess if I am wrong for the next 10 years running—well, then I will still be a VUP (Very Unserious Person).

But yet, what is the threat today? Inflation or Prolonged Deflationary Recession?

Has Japan ever escaped its low-growth deflation? Can anyone speak confidently of Europe escaping its deflationary recession?

No recovery lasts forever. At current inflation and interest rates, a recession in the U.S. would surely result in deflation and zero lower bound all over again.

But the Fed has set aside QE, and shows no inclination of lowering interest on excess reserves. To go back to QE or eliminating IOER would mark a humiliating flip-flop on policies—and all the while the naysayers would be screaming, “QE didn’t work. See? We are in a recession again. Only tight money works.”

So the Fed will enter the next recession hamstrung, slow to respond to declining prices and recession (I mean ever slower than usual).

The above scenario perfectly sets up a lethal deflationary recessionary vortex, sucking down equities and property values, eviscerating U.S. savings and balance sheets, scaring off investment in plant and equipment. The Fed will be flat-footed while the economy tanks, and unemployment soars. Federal deficit spending will balloon again, resulting in calls for austerity.

Dudes, it will get ugly.

Instead of welcoming a deflationary recession, the Fed should immediately consider “normalization” of interest rates—on excess reserves, which normally earned no interest.

And if the Fed ever wants real interest rates to be “normalized”, i.e., higher than zero, then it has set help set up sustained and robust economic growth. A central bank cannot “normalize” interest rates through monetary suffocation.

In other words, print more money. Like I always say.

That´s the takeaway from Matt Obrien´s “The recovery is stalling out again. Is the economy actually in … a recession?”

It’s only mostly crazy. And even then, it depends on what you mean by “recession.” If you’re talking about the usual rule-of-thumb of two consecutive quarters of negative growth, then, yes, there’s probably a 5 percent chance that we’ve fallen into one. But if you mean an economic decline that actually makes unemployment go up, then, no, we don’t have to worry about the r-word.

We just have to worry about a new normal of slow growth that might dip into negative territory every now and then even during the good times. In other words, about turning Japanese.

“I am very optimistic as to where the economy is going over the next couple of years,” Mr. Williams said. “We’ve gotten the national economy back to basically full strength,” he said, adding what is now a 5.5% jobless rate will likely move to 5% by year’s end.

How fast we have adapted!