That may be the role of industrial production growth presented as YoY growth of the 6-month moving average.

Note that it only turns negative after a recession (as defined by the NBER) has already begun. Sometimes quite a way into the recession (as in the 1973, 1981 and 1990 recessions, for example).

In January the measure turned negative (-0.2) for the first time after the “recovery” was completed almost six years ago. 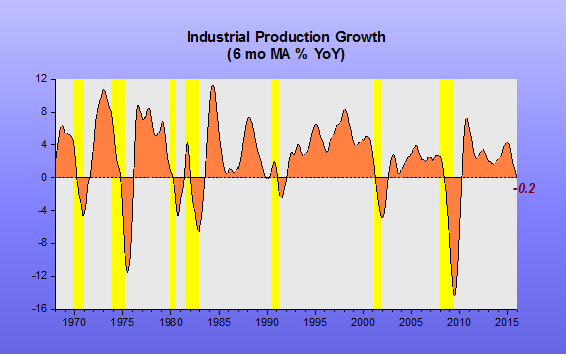 That´s just one more piece of evidence that goes against the grain of FOMC members, like John Williams who, in a speech yesterday (that sounded more like a “self-help” encounter) concluded:

Despite the Sturm und Drang of international and market developments, the U.S. economy is, all in all, looking pretty good. I still expect to see U.S. GDP growth of about 2¼% for 2016. I still expect unemployment to edge down to about 4½% by late in the year. And I still see inflation edging up to our 2% goal within the next two years. So I’m not down—it all looks good to me.

5 thoughts on “Usefulness of “lagging indicators””