Lael Brainard´s speech on the Fed´s new “longer-run goals and strategies makes reference to a “New Normal”: [I only highlight her references to the labor market]

“The new statement on goals and strategy responds to these features of the new normal in a compelling and pragmatic way by making four important changes.

First, the statement defines the statutory maximum level of employment as a broad-based and inclusive goal and eliminates the reference to a numerical estimate of the longer-run normal unemployment rate.6 The longstanding presumption that accommodation should be reduced preemptively when the unemployment rate nears the neutral rate in anticipation of high inflation that is unlikely to materialize risks an unwarranted loss of opportunity for many Americans.

Third, the statement highlights an important change in the Committee’s reaction function. Whereas previously it sought to mitigate deviations of employment and inflation from their targets in either direction, the Committee will now seek “to mitigate shortfalls of employment from the Committee’s assessment of its maximum level and deviations of inflation from its longer-run goal.” This change implies that the Committee effectively will set monetary policy to minimize the welfare costs of shortfalls of employment from its maximum and not preemptively withdraw support based on a historically steeper Phillips curve that is not currently in evidence and inflation that is correspondingly much less likely to materialize.

… Beyond that, had the changes to monetary policy goals and strategy we made in the new statement been in place several years ago, it is likely that accommodation would have been withdrawn later, and the gains would have been greater.”

What she really shows is that the post Greenspan FOMC has continuously misinterpreted the economy.

The panel below clearly illustrate that during the 1990s and early 2000s (before the Great Recession), a stable growth rate for nominal spending (NGDP) was what was required to keep the rate of unemployment on a downward trend while inflation either fell or remained low & stable.

The same remains true for the post GR period.

When the Fed makes a big monetary policy mistake and allows nominal spending to tank, the consequences are also big. This was the case in the monetary-led Great Recession. NGDP tanks while unemployment balloons. Inflation dropped by 50% (from 2% to 1%).

Four years ago (Sept 16) Lael Brainard made a speech with the title: “The New Normal and what it means for Monetary Policy”. One of the key features of the New Normal was:

The next chart zooms in on 2016 to indicate the “cause” of the sideways move in unemployment. You easily see it was due to the excessive drop in NGDP growth from the 4% average that prevailed in the 2010 – 2019 period. The same happened 20 years before. The Fed should have picked on this “pattern” some time ago! As seen in the previous charts, once NGDP growth picks up again, unemployment resumes the down trend. 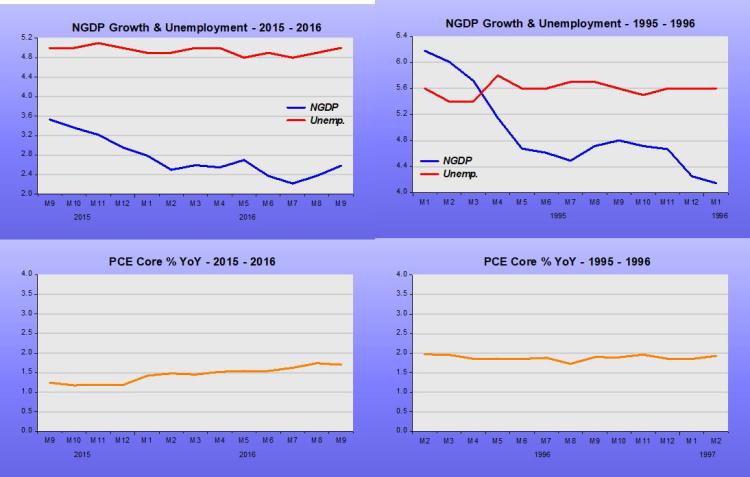