It’s been lonely blogging that the Euro Area economy was not nearly as bad as consensus reckons, even consensus amongst our fellow Market Monetarists. But the data has consistently shown Euro Area NGDP growth doing better, and at least as good as the long-term average.

The long-term avearge is dragged by the twin recessions and growth is still way below trend but it is far from hopeless. The Euro Area PMIs for July out today are quite good in themselves and especially good given they were taken after the Brexit shock and incorporate the impact of the growing Italian bank crisis and the terrorist tragedies in France. The Composite Index may be at 18 month lows but it was expected to be much worse that the still positive 52.9 reading.

Monetary policy is just about as easy as it could be given it is operating with the handbrake firmly on. The ECB balance sheet is roaring up and taking Euro Base Money with it. Draghi has said that he will keep the policy of QE for as long as it takes.

There is constant worrying chatter about the challenges of finding appropriate stuff for the ECB to buy – and this is great news. It is the “Chuck Norris” effect in action as it demonstrates the ECB’s commitment to QE on top of the actual financial asset buying it is undertaking. It will make economic actors begin to believe nominal growth really will accelerate even if the ECB doesn´t take further concrete steps (or “steppes”). The hot potato monster  may be stalking the land again.

German and Spanish NGDP growth rates are a great cause for hope. Draghi must know Italy desperately needs stronger NGDP growth to help solve its bad debt problem as our friend Lars Christensen has shown in a “one graph”  version. If Italy doesn’t get it then the EU may soon suffer another exit.

Releasing the handbrake represented by the foolishly self-defeating 2% inflation ceiling would mean that none of this money growth is actually necessary but, hey-ho, that is the way of the world with inflation ceilings or inflation targets that morph into ceilings.

Why do problems emanate in the South, even if you discount Greece (Deep South)? For the purposes of this post, South comprises France, Italy, Spain and Portugal, respectively the second, third and fourth largest Eurozone economies. North considers Germany (the largest EZ economy), Belgium, Netherlands and Austria.

Let me try to head off some comments that might talk about individual countries. As far as the ECB is concerned, the health of individual countries (including Germany) is TOTALLY irrelevant. What matters is the Eurozone as a whole, where monetary policy has been and is still far too tight.

But what we seem to have is a two-speed Eurozone: The “do-well” North and the “flailing” South. The charts indicate that the ECB monetary policy has “discriminated” against the South. That could be indicating that the South does not satisfy the conditions to be part of the monetary union. In that case, problems will only get worse with time!

Things are changing. It is looking like Euro Area NGDP growth could soon overtake that of the US, with similar consequences for RGDP.

Mario Draghi and most of the ECB is keen to do more monetary easing. The QE programme seems to be working on NGDP despite his struggles to raise the inflation rate.

Janet Yellen and most of the Federal Reserve thinks monetary conditions are too easy and, using the discredited Philips Curve, believes that low levels of economic slack mean inflation is about to accelerate.

Both central banks use false Phillips Curve models, it’s just that they think they are in different places on the Curve. The Europeans think they have plenty of slack. Massive slack, or rather high unemployment shows something is wrong with the economy and monetary policy can do something about that by raising nominal income. When there is less obvious slack, as in the US, monetary policy should be set to provide stable levels of nominal GDP growth. The US is clearly failing here.

The result is improving economic prospects for the Euro 19 and worsening ones for the US.

The market also has to anticipate future changes in the monetary base, and as can be clearly seen there have been numerous false starts, especially in the Euro Area. However, the evil Trichet has gone and the austro-Germans on the board of the ECB significantly weakened in authority and influence. The bias is firmly in favour of more easing, and the market should continue running with that.

Sadly, the Euro Area economy has a lot of ground to make given those horrible NGDP and Base Money growth rates over the last seven years.

Greece may be melting down under relentless tight-money policies of the European Central Bank (ECB), but no worries.

“Rather than promoting sustainable and balanced global growth, the system risks undermining it,” Mr. Claudio Borio, head of the monetary and economic department said. “It has spread exceptionally easy monetary and financial conditions to countries that did not need them, exacerbating vulnerabilities there.”

That must explain the global double-digit inflation we see emerging. So much easy money!

Seriously, the Cleveland Federal Reserve Bank says inflation expectations are below 2% for the next 10 years—this is “easy money”? Greece is scant mentioned in the BIS annual report, except to be damned for pushing the ECB to an “easier” stance.  I wish I was making this up.

The old saw is that democracy is a lousy way to run a country, until you try any other way. One can certainly rue the economic structural impediments that become permanent fixtures in democracies, what with voting blocs and accommodating office holders.

But the incredible arrogance, ineptitude and theo-monetaristic certitude of central bankers certainly tops any stupidity foisted by voters upon themselves. Voters can and have voted in tax and regulatory platforms that slow down economic growth—but the tight-money lunatics at BIS and the ECB have devised schemes that obtain actual, sustained contractions of economies.

Western central bankers, unmoored from reality or any connection to actual economies—they get their salaries no matter what is the real economic growth rate—have become economic ISIS-men, genuflecting to and implementing an ascetic ideology even as it wreaks destruction.

It is difficult to believe that less than 23 years ago, in Oct. 1992, Milton Friedman bashed the U.S. Federal Reserve in The Wall Street Journal op-ed pages for being too tight—and that, when the Fed had just cut the federal funds rate from 10% to 3%, and CPI-inflation was 3.2%! In 1992 Q4 real growth clocked in north of 4.0%.

Friedman rebuked those who erroneously connected low rates to “easy money”—just the opposite is true, he pointed out. Years of “easy money” do not result in ZLB and deflation. Except perhaps, to demented BIS gnomes.

The slavish zeal for microscopic inflation rates or even deflation at any cost is a new and dangerous affectation among the money-obsessed, especially central bankers. And tight money has not worked! Look at Japan, Europe, or the U.S. in 2008.

Indeed, when did monetary suffocation end up in the nirvana of rapid real growth and but zero inflation?

I see no optimistic economic outlook for Europe.

The annual report from the BIS suggests a depth of monetary-policy depravity to rival the Mariana Trench. Europe has an un-democratic central bank that will suffocate parts of Europe for decades, and pompously pettifog the whole time.

The Federal Reserve may be a bit better. One can at least hope the GOP will win in 2016, and like President Nixon, or the Reaganauts, the installed GOP go after the Fed to print more money. Remember, hounded by Reagan’s minions, Fed Chairman Paul Volcker in 1981 declared victory on rising prices—when inflation was at 4%. Today 4% inflation would be presented economic bubonic plague. Funny thing, America prospered in the 1980s with moderate rates of inflation, and then again in the 1990s.

The Bank of Japan and the People’s Bank of China may be the best of the central banking lot today.

“What anchors trust in the central bank is that our objective and strategy stay constant–and this is even more important when monetary policy becomes more unconventional,” he said. “For this reason, innovative ideas to change our strategy, such as targeting a price level, would in fact be counterproductive in the current environment.”

The ECB´s target is an inflation rate close to but slightly below 2%. From 1999 to 2007 they did an almost perfect job, with inflation averaging 2%. Over the last few years, however, inflation has been on a downtrend and has recently even become negative!

The chart shows what happens under the IT and PLT alternatives. Given that the price level has fallen significantly below the 2% trend line from 1999, if, as Mr Mersch prefers, the ECB keeps to its IT strategy, the price level will be permanently lower. This means that the ECB will not be ‘penalized’ for having missed the inflation target for a long time. It´s sufficient that from now on it hits it!

Adopting a price level target, on the other hand, would force the ECB to offset its previous error. Temporarily, inflation would be higher than 2%, which, in any case, is exactly what´s needed!

It would be even better if, instead of a price level target the ECB adopted an NGDP level target, but that would be asking too much from such a conservative body.

I made the case in my last post that the Eurozone crisis was largely a monetary policy crisis. That is, had the ECB lowered interest rates sooner and begun its QE program six years ago the fate of the Eurozone would be more certain. Instead, it raised interest rates in 2008 and 2011, waited until this year to begin QE, and allowed inflation expectations to drift down. In short, had the ECB been more Fed-like the Eurozone crisis would have been far milder.

This begs the question as to why the ECB failed to act more Fed-like. Why did it effectively keep monetary policy so tight for so long?

For that question he provides a long answer. I´ll boil it down to two panels.

In panel 1 we have the behavior of NGDP relative to trend in 4 “core” countries (you may consider France “borderline”).

The negative effect of the 2011 rate rise was stronger in France than in the other core countries. France was on a “slow train” (compared to Germany) back to trend (green dashed trend line). Trichet, a Frenchman, threw France “off the train”!

You can imagine what the German-centric ECB actions did to the “periphery”. You don´t have to, just take a look at panel 2, that contemplates 4 peripheral countries: 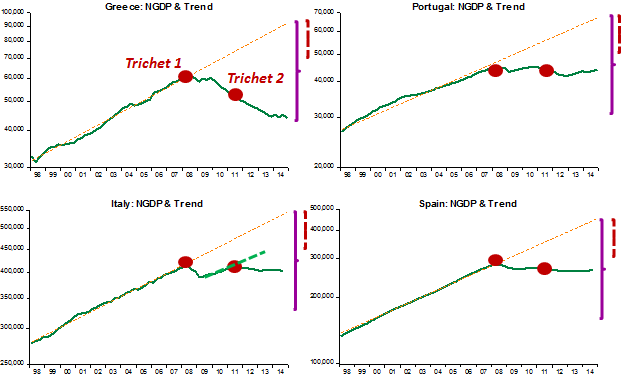 Greece was “murdered”! Italy suffered with the 2001 rate rise. It was on the same “slow train” as France, but got ejected!

Bottom Line: “This is not a monetary union“. As is, the euro is unworkable.