First, you get a “The Hero” magazine cover

Then you get to be Person of the Year

And finally, you write a memoir titled “The Courage to Act”

and voilá, the myth is born!

Here is an extract from an interview with Ben Bernanke by George Eaton in the New Statesman:

Though a depression was averted in 2008, the recovery in the US and the UK has been slow. Bernanke partly blames the imposition of fiscal austerity (spending cuts and tax rises), which limited the effectiveness of monetary stimulus. “All the major industrial countries – US, UK, eurozone – ran too quickly to budget-cutting, given the severity of the recession and the level of unemployment.”

Partly thanks to Bernanke’s leadership (and knowledge), the Great Recession was not as bad as the Great Depression of the 1930s. Monetary policy reacted much more quickly, and financial institutions were (nearly all) bailed out. In 2009 we also enacted fiscal stimulus, but in 2010 we reverted to the policies of the early 1930s with fiscal austerity. That mistake was partly the result of panic following events in the Eurozone (see the IMF analysis discussed here), but it also reflected political opportunism on the right.

However, as Scott Sumner concludes in a recent post:

That’s why it’s so important to get the facts right. Just as the Abe government showed the BOJ was not out of ammo in the early 2000s, a close examination of what the Fed did and didn’t do, and a cross country comparison of monetary policy during the Great Recession and recovery, shows that monetary policy is always and everywhere highly effective.

What are the facts?

The chart shows that during the first few months of the Great Depression (GD) and the Great Recession (GR), the behaviour of NGDP was similar. 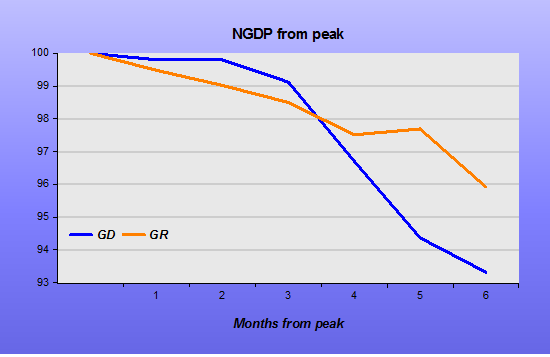 After that, things were very different. What Bernanke´s knowledge did was to apply the results from his “made my name” 1983 article “Nonmonetary effects of the financial crisis in the propagation of the Great Depression”, by going on a bank bail-out spree, thus avoiding the propagation factors that were very “active” in 1931/32.

The charts from the Great Depression indicate what Bernanke avoided. They also show that to get the economy to “turn around” and take a path back to the previous trend, monetary policy has to be really expansionary. That was true even with interest rates at the ZLB, as happened when FDR made a significant change in the monetary regime, cutting the link to gold in March 1933, almost four years after the start of the depression! NGDP growth went up by enough to put the economy on the path back to trend.

The next charts show what happened now. Notice that in the early 2000s, Greenspan also allowed NGDP to drop below trend, but that mistake was fully offset, and by the time Bernanke took the Fed´s helm. NGDP was back on trend.

Without going in to all the details, the fact is that Bernanke allowed NGDP to fall in “Great Depression style”. As mentioned, he avoided a second “GD” by bailing-out the financial system. In addition, by introducing QE in March 2009, monetary policy reacted much more quickly than in the “GD”.

However, notice the difference. In Bernanke´s case, monetary policy was just sufficient to put the economy on a growing trend along a lower level path. It never tried, as happened after March 1933, to get back to the original trend path. Thus, the economy is stuck in a “lesser depression” a.k.a. “Great Stagnation”.

And that really has nothing to do with fiscal policy.

Paul Krugman writes “Did The Fed Save The World?”:

Bernanke’s basic theme is that the shocks of 2008 were bad enough that we could have had a full replay of the Great Depression; the reason we didn’t was that in the 30s central banks just sat immobilized while the financial system crashed, but this time they went all out to keep markets working. Should we believe this?

It’s not a hard story to tell — and I very much agree with BB that pulling out all the stops was the right thing to do. You don’t play games at such times.

But I’m not persuaded that the real difference between 2008 and 1930-31 (which is when the Depression turned Great) lies in central bank action, or related bailouts.

It’s true that the 30s were marked by a big financial disruption; one measure (which I learned from Bernanke’s academic work) is the soaring spread between slightly risky corporate bonds and government debt:

But there was also a big financial disruption in 2008-2009, in fact comparable in size by this measure:

So really, was putting a limit on the financial crisis the reason we didn’t do a full 1930s? Or was it something else?

And there is one other big difference between the world in 2008 and the world in 1930: big government. Not so much deliberate stimulus, although that helped, as automatic stabilizers: the U.S. budget deficit widened much more in 2007-2010 than it did in 1930-33, even though the slump was much milder, simply because taxing and spending were much bigger as a share of GDP. And that budget deficit was a good thing, supporting demand at a crucial time.

Again, Bernanke and company were right to step in forcefully. But I’d argue that the fiscal environment was probably more important than monetary actions in limiting the damage.

The charts below allow for a different narrative.

Notice that the “financial disruption” in the Great depression only began 15 months into the economic contraction, being responsible (“propagating”) the second stage of the contraction. When did it end? When FDR delinked from gold and NGDP turned around.

The main point, however, is that in this version of the comparative stories the “fiscal actor” (big government) does not get to go on stage!

Those charts just show the central bank doing its job. In the 1930s by abandoning the gold standard to provide the necessary accommodation. In 2009 by furnishing liquidity and avoiding rate spikes. In doing so they don’t crowd big government off the stage, they keep the stage from collapsing so the show can go on.

If the central bank is doing its job in accommodation though, it can’t “do more” and whether anything happens on the stage or not depends on degree to which the government steps up with the necessary spending and this chartdetermines the pace and quality of NGDP recovery.

The version of his chart is on top: 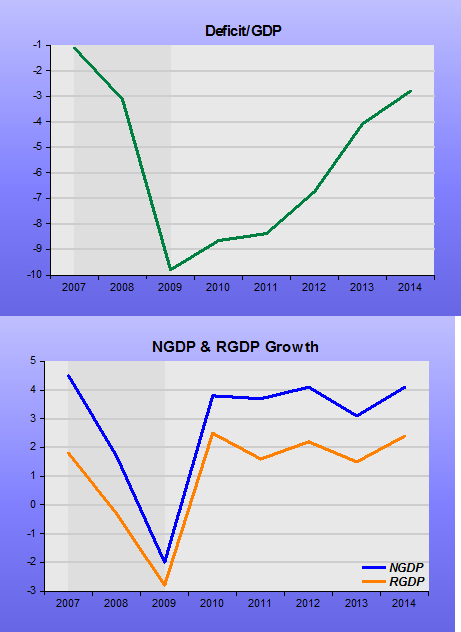 In “The Great Depression and the Great Recession in the North Atlantic”, Brad DeLong writes:

Diagnoses of how we got into this mess and why we are still mired in it–albeit to a substantially less degree than in 2009, and to a much less degree than in 2009 we feared we would be in 2010–vary. Let me give you my take–which is disputable, and indeed often disputed. I follow my next-door office neighbor at Berkeley, Barry Eichengreen, and find that one of the many important factors that has led to our current situation was the intellectual success of a book: Milton Friedman and Anna Jacobsen Schwartz’s A Monetary History of the United States. You can read Barry’s version of the argument in his excellent and brand-new book, Hall of Mirrors [see here for a comment on Eichengreen]

…And of course, the textbook Friedmanite cure was tried á outrance over 2008-2010 and proved insufficient. The monetary policy that Ben Bernanke pursued was Friedman-Schwartz to the max(!). It cushioned the downturn–the U.S. has done better than western Europe about to the degree that Bernanke was more aggressive in lowering interest rates and buying bonds for cash than his European counterpart Trichet. That is evidence that Friedman and his monetarists were wrong about the Great Depression as well. There are thus few people today who have properly done their homework who would say, as Ben Bernanke said to Milton Friedman and Anna Schwartz in 2002:

You’re right, we did it. We’re very sorry. But thanks to you, we won’t do it again.

And right now Ben Bernanke, now at the Brookings Institution, has changed his mind. He is now calling for Keynesian cures–expansionary fiscal policy, especially infrastructure spending, as the bet road forward.

And because the intellectual victory in the 1970s and 1980s was complete, policymakers in 2008-2010 were hesitant and unwilling to apply the Keynesian and Minskyite cures to severe downturns enthusiastically enough and on a large enough scale to adequately deal with the problems that emerged. When the collapse came, the economists advising the North Atlantic’s governments and central banks were not ready.

Why did the collapse come? Start with the huge rise in wealth among the world’s richest 0.1% and 0.01% from the 1970s into the 200s, and the consequent pressure for people, governments, and companies to take on increasingly unsustainable levels of debt. Continue with policymakers lulled into complacency by the widespread acceptance of the “efficient-market hypothesis”–believing that investors in deregulated financial markets were relatively good judges of risk. End with hubris: the confidence in the Federal Reserve and elsewhere that grew because the Penn Central collapse of 1970, the Latin American financial crisis of 1982, the stock market crash of 1987, the S&L crisis of 1991, the Mexican crisis of 1995, the East Asian crisis of 1997, the Russian/LTCM crisis of 1998, and the dot-com crash of 2000 had not caused the Federal Reserve problems that it could not handle well enough to keep the unemployment rate from going up by more than two percentage points.

The reasoning can only be a bad sign of the times!

Turning finally to policy recommendations.  Given the diversity of situations, it is obvious that policy advice must be country-specific. Even so, some general principles continue to hold. Measures to sustain growth both in the short and the longer term continue to be of the essence. With the introduction of quantitative easing in the euro area, monetary policy in advanced economies has largely accomplished what it can.

No, it has only gone as far as it wants, which is not far enough!

The charts indicate that Greece at the present time has a great depression which is proportionally almost equal to the depths of the US great depression in early 1933. At this point in the cycle, however, the change in the monetary policy regime by FDR in March 1933 had allowed the US to show a significant recovery. The most favorable reading for Greece is that the depression has stagnated!