While we firmly believe NGDP expectations are the best guide to monetary policy we are still some way from having a proper market measure of those expectations. We still have to make do with a host of imperfect proxies: the currency, bond markets, inflation swaps and stock markets. We also have to use data and divine the future by looking in the rear view mirror. An insane way to drive but there it is.

The Euro weakness is showing that monetary policy is loosening, Euro Area stock prices that it is dull, bond markets and inflation swaps that it is tight (if a little looser than it has been). Credit growth is picking up, but this is not a very relevant metric, velocity drives nominal growth not lending, we are not creditists after all even if US and Euro Area central bankers are. A confusing picture to say the very least.

In the rear-view mirror there are healthier signs. We have to wait until December 8th for Euro Area 2nd estiamte of RGDP to get a first estimate of NGDP. However, we have had the data for the two biggest countries and it looked promising, especially for France. Germany was on its trend.

Two of the peripheral countries, Spain and Italy were not early reporters but have now produced their first estimate of NGDP for 3Q. Spain has shown NGDP  accelerating to 4.2% despite RGDP being a touch disappointing by not beating consensus. And Italy has shown a similar trend, RGDP was positive but sluggish, while NGDP has accelerated to a heady 1.6%. Spain and Italy’s improving NGDP trends were missed by both mainstream media and by all other macro-economists.

Some surveys indicate that 4Q is continuing these trends as evidenced by Italian consumer confidence last week, that surprised some, but not really us.

Both countries are still way off trend NGDP growth but they made their choice to join the Euro and it was never going to be a thing of beauty given both countries’ historic association with high levels of inflation and NGDP growth. 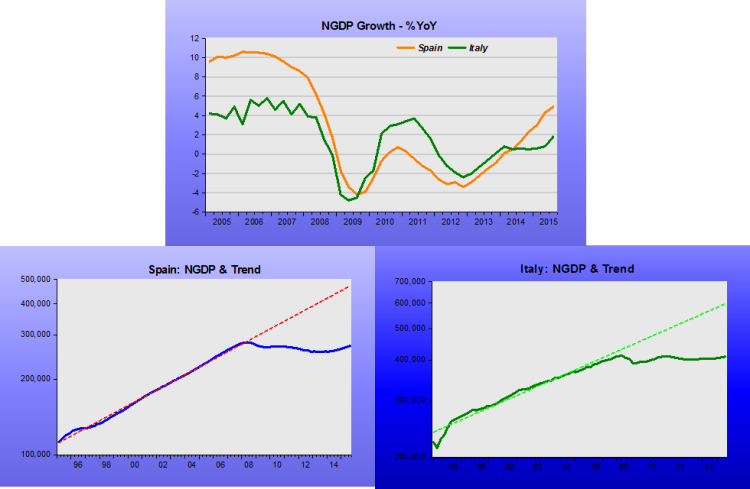 Of course, looking at individual countries inside the Euro Area is a very dangerous game. Monetary policy has to be set for the currency zone as a whole or the end result is assured failure. Petty local antagonism will destroy the monetary union or at the very least render it highly ineffective, if not dangerous, as we have seen repeatedly since 2008.

Germany simply cannot grow consistently faster than the pace of supply side reform allows the slower growers to expand or else the Euro will break up. If Germany (or whoever) doesn’t like this result it should leave the currency area, rather than enforcing tight monetary policy on the majority of the Euro Area, as appears to have happened after it enjoyed a couple of hotter than peers NGDP growth up to 2011, and again right now.

And vice versa, if Italy or Greece don’t like the German (or whoever) dominance they should leave.

But it wasn’t always like this with Germany. For many years German NGDP grew consistently slower than all its peers. For the monetary union to work we really need to see these divergent trend lines converge, just like they have for regions and states of the US. The Spanish and Greek problems are obvious from our chart of NGDP growth since 1996, but safe changes in NGDP trend growth are possible as evidenced by the Netherlands that ran very hot between 1997 and 2001.

The most important issue for us is that even with some signs of progress Draghi must remain on the front foot, and stay there. Some cognizance of level targeting would be a real step forward, ie a willingness to make up for lost ground. A discussion of nominal growth would be even better.