Suppose you lived in a world where, whenever the price level fell/rose by 1%, the central bank responded by decreasing/increasing the base money stock by the same 1%. A world like that would not have a long-run Omega point, from which some present equilibrium can be pinned down by back propagation induction.

That’s the sort of world we live in, under the inflation targeting regime. A drunk doing a random walk does not have a destination, from which we can infer his route by working backwards. His long run variance is infinite.

Stop arguing about whether a market macroeconomy is or is not inherently ultimately self-equilibrating. It’s a stupid question. It depends. It depends on the monetary regime.

Instead, let’s solve the stupid question by adopting a nominal level path target.

It´s even worse. If you don´t plan, i.e. provide a “destination” for it, even a “Great Stagnation” becomes “random”! 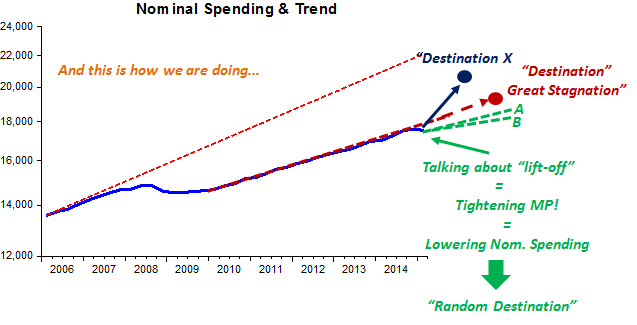 The first shows why the “Great Moderation” happened. The “destination” was the trend level path, to which the economy returned after monetary policy mistakes dislodged it. Observe what many called a period of “too low for too long” rates doesn´t look like that at all!

In the second chart, we note that after the Fed pulled the economy down, it has been satisfied in keeping it down, i.e. “depressed”. It could come out and say that that´s the path (“destination”) it wants it to follow. But no, by saying it´s about time to “tighten” policy, it is implying that the path might be even lower. Is it A? Is it B? The truth is no one knows!

It certainly does not appear to be X!

One thought on “Even a Great Stagnation requires planning!”