The BEA has announced the forthcoming release of new analysis tools:

The Bureau of Economic Analysis plans to launch two new statistics that will serve as tools to help businesses, economists, policymakers and the American public better analyze the performance of the U.S. economy. These tools will be available on July 30 and emerge from an annual BEA process where improvements and revisions to GDP data are implemented. BEA created these two new tools in response to demand from our customers.

This new data tool is just one of the ways that BEA is innovating to better measurethe 21st Century economy and provide business and households better tools for understanding that economy. Providing businesses and individuals with new data tools like these is a priority of the Commerce Department’s “Open for Business Agenda.”

When we have a recession caused by demand deficiency such that interest rates hit their Zero Lower Bound (ZLB), the obvious response from a macroeconomic point of view is fiscal stimulus. Instead governments have become obsessed by their debt and deficits, and so we have austerity instead.

Arithmetically, the U.S. economy is depressed because residential construction and government purchases are well below previously-expected trend levels… 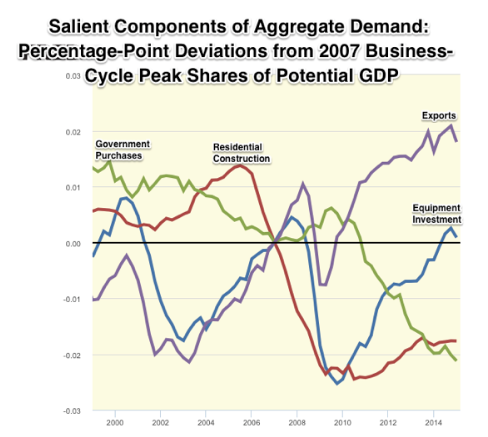 And governments are not responding to market signals: financial markets are telling them that they have a once-in-a-lifetime opportunity to advantageously pull spending forward from the future into the present and push taxes back from the present into the future. But, because of the ideology of austerity, they are not taking advantage of this opportunity.

Brad calls a spade a spade: “Economy is depressed”, but it´s not because of his GDP components reasons.

Take Final Sales of Domestic Product (FSDP), to remove some of the volatile components of NGDP. The charts below show how it has performed relative to the “Great Moderation” trend. You also see that the 90/91 and 2001 recessions were “overcome” when FSDP growth managed to get FSDP back on trend. Not so following the “Great Recession”, with the result being a depressed economy. 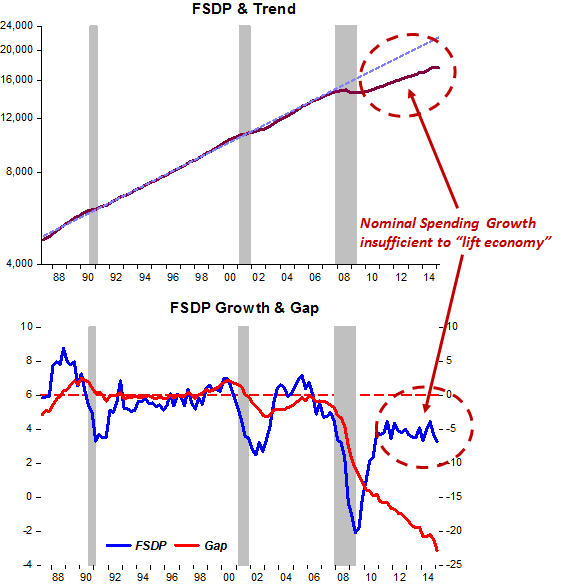 This predicament is not due to “residual seasonality”, “inappropriate tools for analyses” or “ideology of austerity”. It´s wholly due to the Fed constraining the growth of nominal spending at an inadequate level, one that has persisted for 5 years! It´s beyond belief that “growth stability” for that length of time is just a coincidence!

I´m reminded of the wisdom of James Meade, who in his 1977 Nobel Lecture said:

Earlier I spoke of ‘price stability’ as being one of the components of ‘internal balance’. Yet in the outline which I have just given of a possible distribution of responsibilities no one is directly responsible for price stability. To make price stability itself the objective of demand management would be very dangerous.

If there were an upward pressure on prices because the prices of imports had risen or because indirect taxes had been raised, the maintenance of price stability would require an offsetting absolute reduction in domestic money wage costs; and who knows what levels of depression and unemployment it might be necessary consciously to engineer in order to achieve such a result?

The “price stability” obsession is the reason the economy was “knocked down” in 2008!

I have told this particular story simply to make the point that the choice between fiscal action and monetary action must often depend upon basic policy issues which should certainly be the responsibility of the government rather than of any independent monetary authority. Perhaps the best compromise is an independent monetary authority charged so to manage the money supply and the market rate of interest as to maintain the growth of total money income on its 5-per-cent-per-annum target path, after taking into account whatever fiscal policies the government may adopt.

Unfortunately, the economy has remained depressed for too long. That has certainly “sapped its strength”. Nevertheless, a higher level of spending is certainly achievable. Maybe, for incomprehensible (to me) reasons, it´s not desired!