In a recent post, Scott Sumner argues that they are not particularly low conditional on NGDP growth.

The chart shows that for a long time bond yields have been falling together with the fall in inflation expectations (from the Cleveland Fed), which were converging to the 2% “target”. 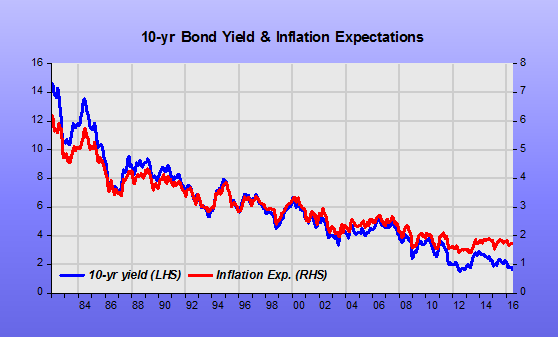 Since the Great Recession ended , however, there has been a disconnect, with the yield continuing to fall while inflation expectations, although below target, have remained stable.

This disconnect can be attributed to the low growth of NGDP which, after tanking in 2008 has never “tried” to get back on the “saddle”. The chart illustrates.

Once the recovery began in mid-2009, NGDP growth accelerated. After mid-2010 it “tapered off”. So there would be no “catch-up” growth. The NGDP growth chart illustrates. 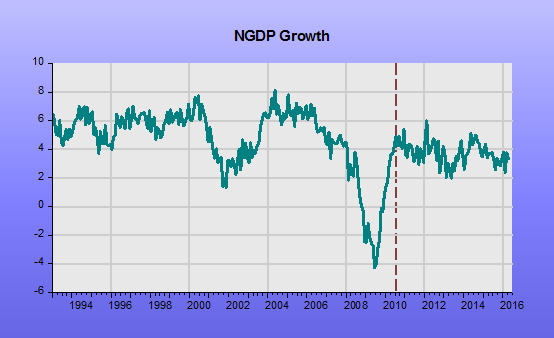 With inflation expectations below target and expectations of low nominal and real growth going forward, there´s no reason for yields to rise! And so they fall. Notice that the start of the rate hike talk in mid-2014 clinches the “low nominal growth-low inflation-falling yield” scenario. 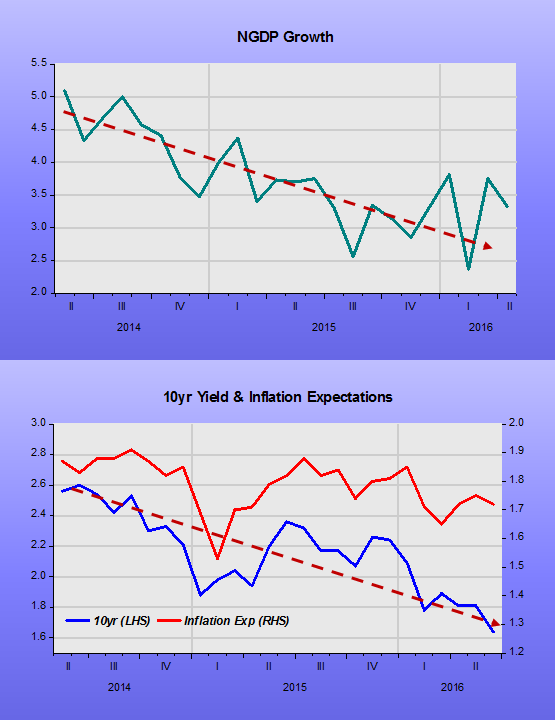 PS Tim Duy has a good post. On John Williams:

Williams gives his view of the disconnect between financial markets and the Fed:

In term of the private-sector forecasts, I think it’s very hard to fully understand what the Fed’s decision-making is given that we haven’t done many active policy steps in the last few years. I mean we did obviously as I mentioned the asset purchases during that period, but since we’ve ended that, we talked a lot about raising rates, we’ve given a lot of “dot plots” about raising rates, we did one rate increase in December, but then it has been over six whole months since then, and – I try to put myself in the shoes of a private sector forecaster – one of the hard things to do is kind of see what is our reaction function. What is it that is driving our decision?…

…Right now we’re just in a situation where there is just not a lot of data on actual actions because, for various reasons we’ve held off a long time on our first rate increase and then we held off so far on a second rate increase.

This I think is wrong; lack of action is a policy choice as much as action. Williams seems to think the only useful information about the Fed’s reaction function comes when the Fed changes rates. This implies that holding policy steady conveys no information. I would argue that steady policy is in fact signaling the Fed’s reaction function, and hence, in combination with the data flow, financial market participants are concluding that the Fed will continue at a glacial pace regardless of what the “dots” say. Indeed, I would say that financial market participants are signaling that the Fed’s stated policy path would be a policy error, an error that they don’t expect the Fed to make. I guess you could argue that the market doesn’t think the Fed understands it’s own reaction function. And given the path of policy versus the dots, the market appears to be right.

2 thoughts on “Are bond yields low?”