Evan Soltas writes on a theme that is much in vogue lately: “Fiscal Policy and the ZLB”:

I have been doing some reading for my undergraduate thesis, which looks at the role of credit-supply shocks in the Spain during its housing boom and bust, and I came across some interesting thoughts from Bob Hall. Commenting on research by Alan Auerbach and Yuriy Gorodnichenko, Hall makes some useful points that contradict a lot of the received wisdom about the efficacy of fiscal policy:

I conclude that the chapter uncovers a proposition of great importance in macroeconomics—that the response to government purchases is substantially greater in weak economies than in strong ones. The finding is a true challenge to current thinking. The first thing to clear away is that the finding has little to do with the current thought that the multiplier is much higher when the interest rate is at its lower bound of zero…Standard macro models have labor and product supply functions that are close to linear over the range of activity in the OECD post-1960 sample. The simple idea that output and employment are constrained at full employment is not reflected in any modern model that I know of. [Bolding is by me, not Hall.]

On the economics blogosphere, the “current thought” is also that, because monetary policy is in certain respects (that is, if only by social convention) constrained when the policy rate hits zero, fiscal policy becomes discontinuously powerful at the zero lower bound. Once the policy rate is a quarter of a percentage point, time to turn off fiscal policy, one might infer. Scott Sumner is one of the clearest and most persuasive exponents of this view—see here, for instance.

It turns out that the best evidence on fiscal policy does not support it. That conclusion is new to me, which is to say that I think I have written things that rely on that view, and I would now consider them to be wrong.

To be clear on what I mean here: First, it is a classic result that, when the efficacy of monetary policy is uncertain, it should not fully stabilize demand. Second, if the zero lower bound poses any restrictions on monetary policy, and it obviously does, if only in many indirect ways, then the appropriate amount of conservatism actually increases the risk of a future zero lower bound event rises, which is basically a function of the current policy rate. Fiscal multipliers are, as a result, well above zero when the policy rate is positive and decrease slowly and smoothly in the policy rate.

Seven years of US experience in steering nominal income without the use of the fed funds rate as the policy instrument should completely disabuse us of the existence of the liquidity trap. When you take into account the ability of monetary policy to offset fiscal policy, the fiscal multiplier is zero, even at the zero lower bound in interest rates. 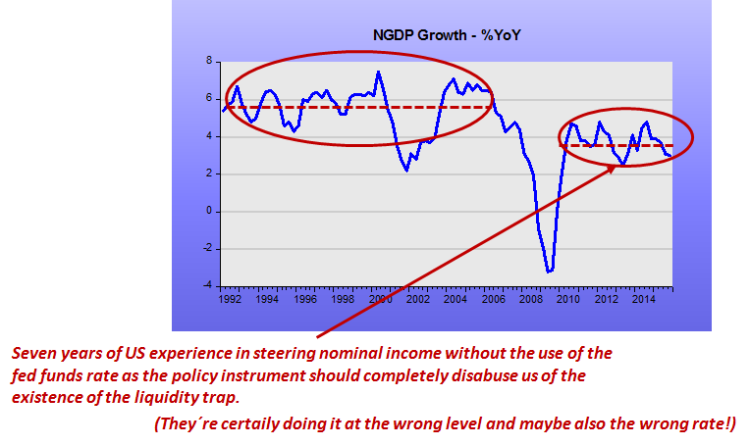 5 thoughts on “On Fiscal policy and the ZLB (What´s he on about?)”