Bill McBride (Calculated Risk) posts Update: “Scariest jobs chart ever” where he presents a version of this chart 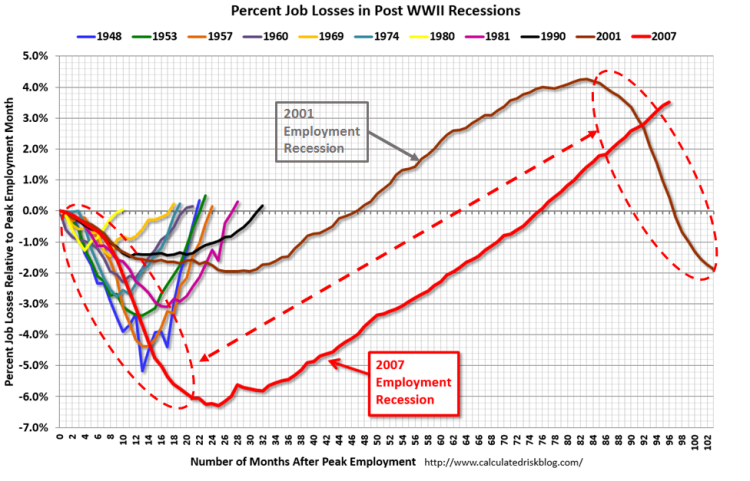 This graph shows the job losses from the start of the employment recession, in percentage terms, compared to previous post WWII recessions.  Since exceeding the pre-recession peak in May 2014, employment is now 3.5% above the previous peak.

By choosing to break with the way he presented the chart originally, with lines ending when the previous employment peak was reached, he ‘pollutes’ the chart, and detracts attention from an interesting characteristic.

Interesting question that comes up from eyeballing the chart:

What accounts for the depth and persistence of the employment recessions?

The short answer: monetary policy, whose stance is well described by the growth of NGDP.

The chart below is a powerful illustrator. 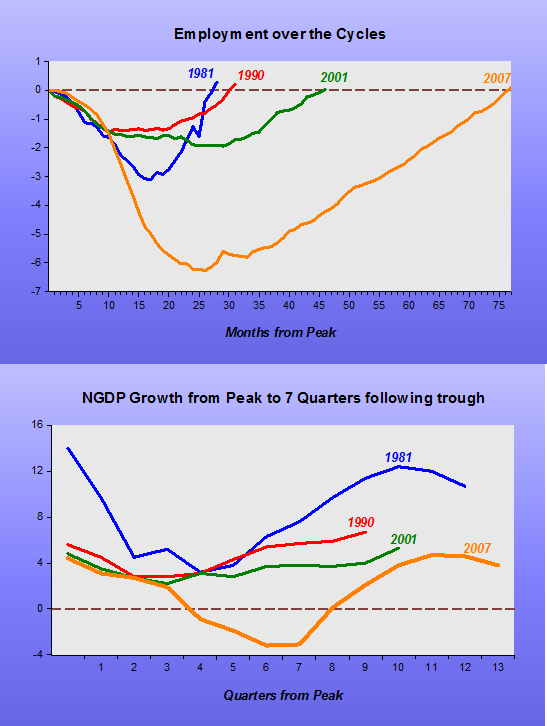 The 1981 employment recession was deep. The fall in NGDP growth was high. The objective of monetary policy at the time was to bring inflation down significantly. It came from double digit rates to the 3%-4% range. The intensity of the employment pick-up is commensurate with the strength of the rise in NGDP growth.

The 2007 cycle is the clincher, and “living proof” of the responsibility of monetary policy in generating the “Great Recession”. Note that for the initial months/quarters since the cycle peak, the fall in employment during the 2007 cycle was par with the fall in employment in the 1990 and 2001 cycles. As should be expected, the behavior of NGDP growth during this stage was very similar in the three cycles.

But suddenly the Fed makes the second largest error since its inception in 1913. The massive drop in NGDP growth, which remains for an “eternity” in negative range, “destroys” employment. The timid monetary pick up, both in relative and absolute terms, fully explains the persistence of the employment recession in the present cycle.

Decades in the future, when the history of the last 30 years will be written by dispassionate researchers, one interesting footnote will surely describe the “NK Trip”, where NK does not stand for “New Keynesian”, but for Narayana Kocherlakota and will show that the “last step” in the “trip” completely denies the “first step”. Furthermore, the “ingredients” deemed important in the stories told today: the house price boom & bust, “greedy bankers”, “spindrift consumers”, will be seen as bit players, in part victims of the monetary “mayhem” brought on by the Fed!

2 thoughts on “The story behind the “scariest jobs chart ever””