Bob Murphy has a post, which starts with a parody:

Suppose someone asks you, “What was the stance of US monetary policy in mid-1980? Pretend you are a Market Monetarist answering.”

BOB TRYING TO PASS AS A MARKET MONETARIST:

First thing, we would not look at interest rates; that is a totally misleading indicator. As Sumner tells us in this post, “Interest rates tell us nothing about the stance of monetary policy.” In context, he is saying that the Fed interest rate cuts in the early 1930s were still consistent with very tight policy.

Instead, let’s look at NGDP and unemployment: (and puts up a version of this chart) 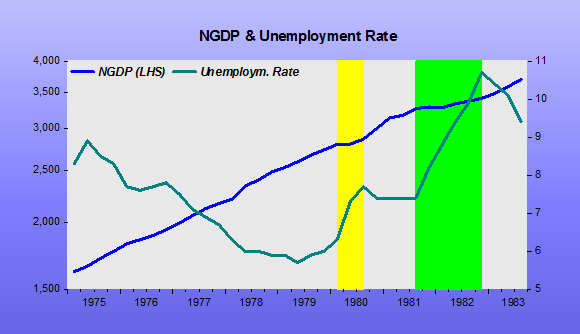 Oh man, there’s a smoking gun, right? The unemployment rate skyrockets in the middle of 1980, while NGDP growth (blue line) collapses. (The blue line is the level of NGDP, so you can see that it falls way below the previous trend starting in 1980.) Think of all the employers who had signed wage contracts during the late 1970s, and all the consumers who took out home mortgages, expecting NGDP to grow at a brisk pace. The rug was pulled out from them by the tight-fisted Volcker, right around mid-1980.

I said parody, because to a market monetarist it would be: “Let´s look at NGDP growth and inflation”.

Changing the chart above to accommodate (beginning the chart in mid-1979 to coincide with Volcker becoming Fed Chairman and extending to mid-1985 that more or less defines for Volcker “mission accomplished):

We gather that monetary policy (NGDP growth) was being tightened as the US went into the 1980 recession (Jan-Jul 1980). However inflation was still rising so, in a sense, monetary policy was not “tight enough”.

Most people knew, when Volcker came along, that it wouldn´t be easy to conquer inflation. Over the previous 15 years of high, rising and volatile inflation, inflation expectations had become entrenched. Moreover, since the early 1960s, it was the rate of unemployment that “governed” monetary policy. Also, as clearly stated by Arthur Burns during his tenure as Fed Chairman from 1970 to 1978, inflation was not a monetary phenomenon, being the result of, depending on the circumstances, union power, oligopolies, powerful oil producing countries.

To Burns, monetary policy could only try to mitigate the effect on unemployment of those real (or supply) shocks.

So, when Volcker´s early tightening resulted in a 2-percentage point rise in unemployment, from 5.7% to 7.7% while inflation (due to lack of credibility given the go-stop style of monetary policy over the previous 15 years) continued to rise, the Fed “backtracked”. The attack on inflation one year later proved successful, although costly in terms of unemployment. Lesson: It´s not easy to break inflation expectations!

As the next chart shows, the cost was high, but temporary, because the economy regained its previous real output trend level path. 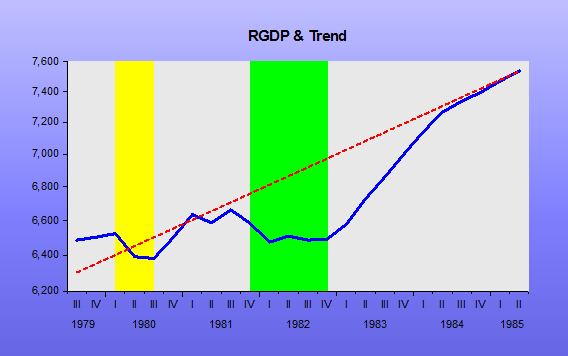 From then, until the end of Greenspan´s tenure, the economy experienced a “Great Moderation”. With the mistakes made by Bernanke, and continued with Yellen the economy has been downgraded to “Secular Stagnating”!