This piece in the WSJ caught my eyes: “A Yen Too Weak Even for Japan”:

Japan has been celebrating the fall of the yen for the past two years. The currency is now reaching levels that could make policy makers wonder if they’ve gone too far.

The yen has cruised through 120 to the dollar, nearing the key 125 level that officials in Tokyo have signaled would be a tipping point for concern. Etsuro Honda, a top adviser to Prime Minister Shinzo Abe on economic policy, told The Wall Street Journal in November that if the yen weakens to 125 it would make him “nervous” and make him “stop and think, ‘is this OK?’”

With the yen already near the limits of their comfort zone, Mr. Abe and central bank Gov.Haruhiko Kuroda will find themselves in a difficult position.

Such “shortsightedness”! Look at the Yen/USD since exchange rates since the breakdown of Bretton Woods: 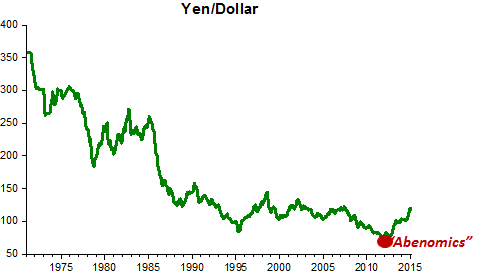 The small “Abenomics upward squiggle” has taken the exchange rate closer to levels that prevailed for several years before the global crisis, when Japan was in “deflation mode”!

The funny thing is that the US has always eyed the yen with great suspicion. During the first half of the 1980s, the dollar appreciated enormously against all currencies except, you guess, relative to the yen. But when the Plaza Accord – an agreement between the governments of France, the US and the UK to depreciate the dollar in relation to the Japanese yen and German Deutsche Mark – was signed in September 1985, the yen appreciated as “agreed”. Notice that the DM only returned to the “starting point”. It appears the object of the exercise was to “clobber Japanese competitiveness”!

Abe & Kuroda should ditch the “yen always has to appreciate” stigma. They´ll find themselves in a difficult position if they start worrying about “comfort zones” for the yen!