The lines show the number of times, per year, that words related to employment, inflation and crisis are mentioned in the meetings. So, if someone mentions “price stability” in a meeting, that gets counted as a mention of “inflation”. If someone blurts out “spare capacity”, that goes in the “employment” bin. And so on.*

Over time, but especially in the 2000s, members of the Fed started using inflation-related words relatively more frequently. In 1978, every time someone mentioned a word related to unemployment, someone else would mention 1.6 words related to inflation. By 2008, the ratio was more than four-to-one. This may not be especially surprising to people who remember central bankers’ obsession with inflation-targeting from the late 1990s; the extent of the shift is more so.

The question is whether the Fed’s shifting priorities are a good thing. With America’s unemployment rate still a percentage point higher than it was just before the recession hit, perhaps the Fed should think a little bit more about joblessness? 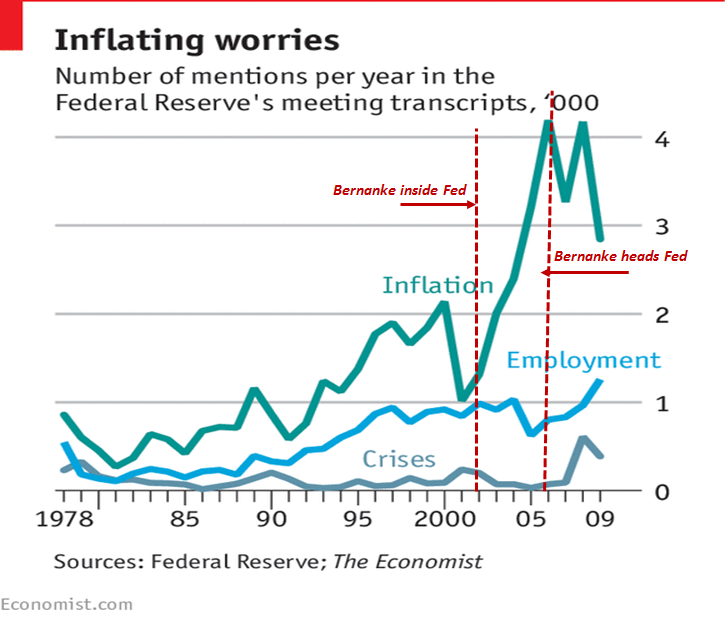 I´ve added a couple of bars. Those indicate when Ben (IT) Bernanke became a Fed Governor in 2002 and the time he became Fed Chairman. Bernanke “correlates” pretty strongly with “inflation phobia” at the Fed!

It´s fantastic to observe that in 2009, with inflation “diving” south and unemployment “shooting” to the moon, inflation was still very much in members head, while unemployment not so much!