The Mises Institute has a veritable festschrift on what they call the Hoover-Roosevelt   Depression with emphasis on the works of Austrians, with an interesting allusion to Lee Ohanian:

The conclusion of Ohanian’s paper is quite—one is tempted to say “hardcore”—Rothbardian.

I wonder if Ohanian will appreciate that ‘compliment’!

As it could be expected wrongheaded government policy was to blame. But there´s no mention of the recovery that began in March 1933 and is associated, as Christina Romer, following Temin and Wigmore who follow Sargent says, was due to a ‘regime shift’, in this case to FDR´s decision to ‘delink’ from gold. NIRA was certainly a ‘recovery stopper’.

The chart below gives the ‘roadmap with sign posts’. I wonder if the July 1932 ‘bottom’ is associated with FDR´s nomination acceptance speech on July 2, 1932. 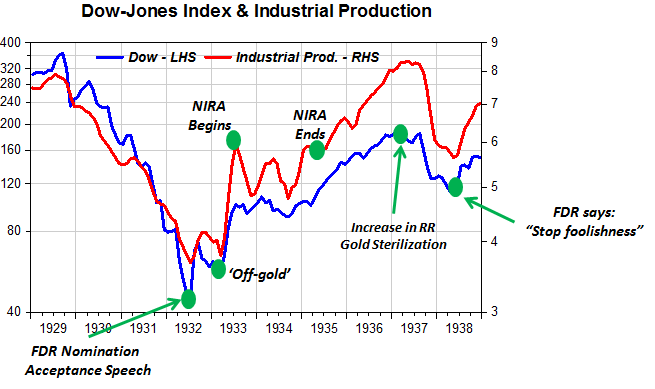 4 thoughts on “‘Roadmap of the Great Depression with sign posts’”