After swallowing Mike Woodfords pointed critiques, Bernanke had to hear from Ed Lazear, a former CEA chairman during the Bush administration that if unemployment remains high (employment low), it´s the Fed´s responsibility!

According to a WSJ report on Lazear´s paper:

Is the job market weak because of structural changes, or is a lack of demand the true factor keeping unemployment rates high?

Answer that, and you resolve a grand mystery that’s bedeviled those who are trying to make sense of the persistently high levels of unemployment that have been afflicting the U.S. economy for several years now.

The answer isn’t just academic: If a lack of demand is behind high unemployment, the Federal Reserve can help fix the situation via monetary policy stimulus. Structural problems, however, are beyond the reach of those remedies.

A paper presented Saturday at the Kansas City Fed’s annual Jackson Hole, Wyo., research conference argues that what currently ails the economy is indeed a demand problem. That suggests the Fed has room to act if it chooses to do so. The paper was written by Edward Lazear of Stanford Graduate School of Business and James Spletzer of the U.S. Census Bureau. Mr. Lazear was also a chairman of President George W. Bush’s Council of Economic Advisers.

“An analysis of labor market data suggests that there are no structural changes that can explain movements in unemployment rates over recent years,” the authors write. “Neither industrial nor demographic shifts nor a mismatch of skills with job vacancies is behind the increased rates of unemployment.”

The charts illustrate the “demand problem view”. They compare aggregate demand (NGDP), employment, unemployment and long term unemployment for three recessions. In all charts the period goes from the previous cycle peak to 12 quarters after the through (which is the time span available for the present cycle). 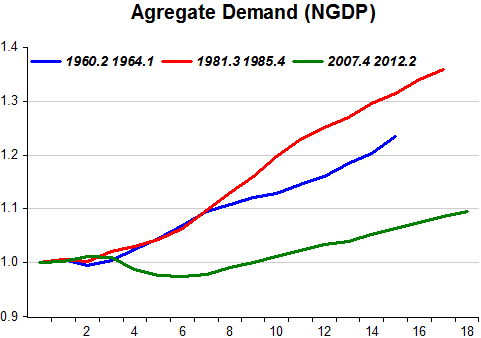 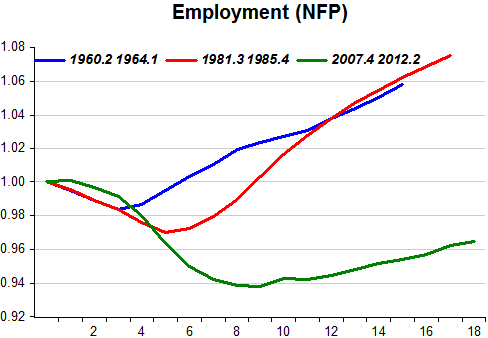 So the authors are correct to argue:

It´s not just “worse”, but much more so! The initial drop in demand has no comparison in the post war data. One has to go back to 1938 to see something comparable.

In another report from Jackson Hole, this time by Binyamin Appelbaum from the NYT, we read:

Mr. Bernanke has generally resisted proposals for the Fed to shift its policy framework – and he has specifically branded as “reckless” ideas that would raise the Fed’s inflation target, like N.G.D.P. targeting.

If true, Bernanke gets it all wrong. NGDP level targeting is not about raising the Fed´s inflation target. In fact, during our sample recessions, even when NGDP rose strongly during the recovery except, of course, at the present time, inflation has either stayed low or was falling (the chart shows inflation only during the 12 quarters of recovery). 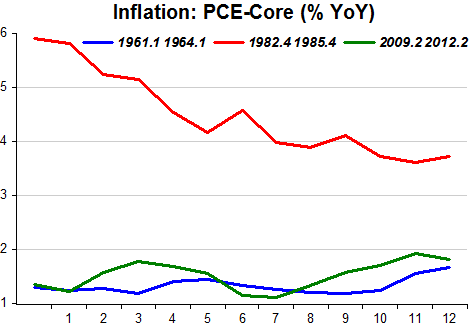