In 30 troubling years Krugman has this to say:

Second, a dramatic rise in household debt, which many of us now believe lies at the heart of our continuing depression. Here’s household debt as a percentage of GDP: 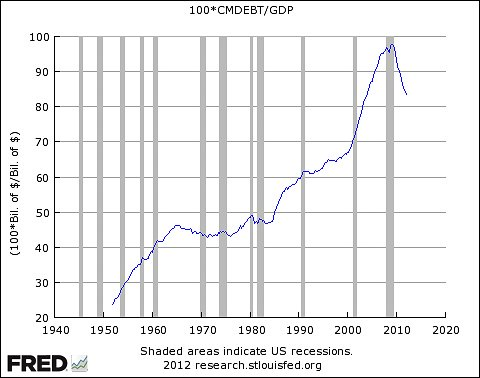 What do you see?  I suppose it’s in the eye of the beholder, but I see three big debt surges:  1952-64, 1984-91, and 2000-08.  The first debt surge was followed by a golden age in American history; the boom of 1965-73.  The second debt surge was followed by another golden age, the boom of 1991-2007.  And the third was followed by a severe recession.  What was different with the third case?  The Fed adopted a tight money policy that caused NGDP growth to crash, which in turn sharply raised the W/NGDP ratio.  Krugman has another recent post that shows further evidence of the importance of sticky wages.  Forget about debt and focus on NGDP.  It’s NGDP instability that creates problems, not debt surges.

I agree with Scott.

Why does the share of debt rise? I believe it reflects peoples “optimism” about future prospects. In the chart below I break down Krugman´s chart and separate mortgage and non-mortgage household debt as a share of NGDP. I also add the behavior of the stock market (here represented by the Dow-Jones Index). 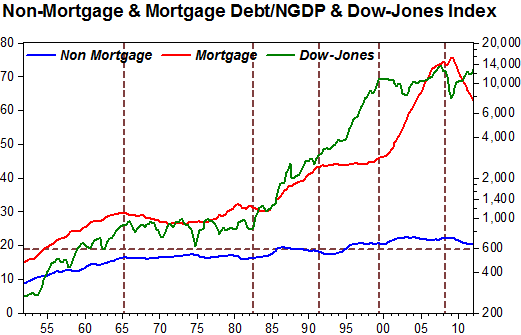 Non-mortgage debt remains relatively stable after 1965, fluctuating in the range of 17% to 22% of NGDP. No problem there. During the 1950s and first half of the 1960s we observe a rise in household debt. People felt good about the future. The stock market gave out the same information.

Note, however, that as soon as inflation begins to trend up in the second half of the 60s, the future doesn´t look so bright anymore. Households’ don´t increase indebtedness and the stock market stops rising (falls in real terms).

Following the “Volcker Transition”, with inflation being brought down permanently and the economy entering the “Great Moderation”, future prospects ‘brighten’ up again. Both mortgage debt and the stock market trend up. This goes on until the early 90s. At that point, likely reflecting the S&L debacle, mortgage debt stops rising despite future prospects remaining bright as indicated by the stock market´s upward trend.

In the 00s the story is reversed. The stock market ‘brakes’ while mortgage debt picks up strongly. To me that´s an indication of some inconsistency.

To keep the populace happy, Roman Emperors gave them ‘bread and circus’ (free bread and gladiator fights to the death). In order to divert attention from his ‘undesirable’ war policies and consequent increase in public deficits and debt, President Bush came up with the idea of:

The institutions that permitted the ‘homeownership’ program were in place (CRA, tax breaks) and Fannie & Freddie were there to provide “guarantees”. A bit of required macroeconomic adjustment also came in ‘handy’. Following the Asia crisis in the late 90s, the US became the ‘buyer of last resort’ to the world. The US current account deficit increased. For that to take place, while ‘Asia’ had to relocate resources from the nontradable (say housing) sector to the tradable sector, the US had to travel the opposite route. In other words, houses had to move from Asia to the US! And it was done in spades!

Wrong incentives, bad policy, and corruption. That´s all true and there was no escaping ‘judgment day’. What didn´t need to happen was monetary policy trying to ‘suffocate’ the economy while it was in the process of adjustment. Just think what would have happened if the post WWII adjustment (that required a steep reduction in government spending, the generation of civilian employment for millions, etc.) had to take place with the Fed at the same time pursuing a contractionary monetary policy, i.e. restraining spending (NGDP) growth. The US would be another country altogether today.