Germany is engaged in a purifying crusade, epitomized by its push for the unconditional adoption of “austerity” by all member countries of the euro, in particular the so-called PIIGS.

As demonstrated by recent results coming from the polls, a resistance to the Germanic dictates begins to manifest. The escalation of this process is almost inevitable, especially given the inconsistency of the requirements. Also, “Merkollande” will not be anything like “Merkozy”

The arguments of this text will be illustrated with the most obvious cases of inconsistency, and exemplified by Germany, Ireland and Spain.

Ireland and Spain are seriously injured victims of the German narrative that everything boils down to “fiscal irresponsibility.” Let’s take a look at this “rampant borrowing and spending” of Spain and Ireland relative to Germany.

The figures below show the debts and deficits relative to GDP of Spain and Ireland compared to Germany.

Note that both Spain and Ireland, until the moment when the crisis struck, were more “austere” than Germany and, unlike her, never disrespected the limit of 3% for the Deficit / GDP ratio set in the Maastricht agreement .
Now, notice what was happening with the flow of private capital, reflected in the current account balance relative to GDP in the three countries.

Given these facts, what would naturally happen? If the current account surplus of Germany was the counterpart of the current deficits of Spain and Ireland, now would be the time for a reversal of roles. For those who believe in fairy tales this may seem possible!

And what happened to growth and employment when the “music stopped and there were not enough chairs to accommodate the participants’? The following figures illustrate.

What a turnaround! And in order to correct the course Ireland and Spain have to promote an “internal devaluation”. This point is important and interesting. One reason for the formation of a bloc with a single currency was the elimination of currency risk inherent in a regime of fixed exchange rates, such as the EMS (European Monetary System).

In fixed exchange rate regimes, such as EMS or Bretton Woods regime that prevailed in the postwar period until 1971, a problem that always came up in times of turmoil or crisis in the balance of payments was about who would bear the burden of adjustment. Since the crisis manifested itself only when the foreign reserves of deficit countries had been exhausted, these countries were at the mercy of creditors. And creditors were quick to impose unilateral adjustment. After all, “sinners” have to atone for their sin!

It was hoped that monetary union would change all that. However, the adjustment process within the euro area seems to be as asymmetrical as the adjustment mechanisms that prevail in fixed exchange rate regimes. In this case it does not happen due to traditional balance of payments crisis, since this type of crisis cannot manifest itself in a context where internal foreign exchange markets have disappeared. However, another mechanism is at work.

This new mechanism derives from the weakness inherent in a monetary union where national governments issue debt in a currency over which they hold no control. In such a system when the fiscal position of a country deteriorates as a result of, for example, the deflationary effects of an internal devaluation, investors may be gripped by fear, which leads to a collective manifestation of distrust. The ensuing sales of securities leads to a liquidity contraction in the countries concerned. This ‘sudden stop’ in turn leads to a situation in which the government of the country cannot finance its debt unless interest rates are prohibitively high. The conclusion is that in the absence of a lender of last resort – a role that the ECB (European Central Bank) is not permitted to undertake  – a member country in a monetary union can be driven to default by panic in financial markets.

Thus, in the same way as in a fixed exchange rate regime, a government in a monetary union that is hit by crisis has to go “begging” creditor countries. And these – the “saints” – cannot be  pressured to contribute to the adjustment process, i.e. making it more symmetrical.

The figure below shows how much internal devaluation has taken place in Ireland and Spain since the peak in 2008 or 2009, and in the case of Germany, the “internal revaluation” that  has occurred over this period. 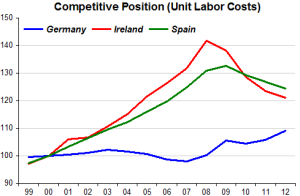 While Ireland has “promoted” an internal devaluation (a fall in unit labor cost) of 15% and Spain 7%, the internal revaluation in Germany does not reach 4%. And as illustrated in the figures depicting growth and unemployment, suffering must have a limit. Thus, while an imagined political imperative  created  the euro, real world political disillusionment will likely bring its downfall.

For a short time this week hope sparked from the French and Greek election fallout. On Wednesday  May 9th a Bundesbank economist was bold enough to say  that “the country) could tolerate slightly higher inflation in return for more domestic demand”. The next day Finance Minister Wolfgang Schaeuble chimed in, saying “inflation of up to three percent was “acceptable” in the short-term”.

According to this source:

The two comments sparked speculation Germany was ready to relax its hardline stance against wage rises and inflation in a bid to boost consumption in the European powerhouse and thereby help to ease the crisis in the eurozone.

But hope was short-lived because on Friday Jens (“Big Stick”) Weidmann, Bundesbank head,  intervened sharply to slap down what he termed an “absurd debate” about inflation.

So it seems that things will progress as they always have and the required adjustments will fall almost completely on the “sinners”. The charts below are a good indicator of the relatively comfortable German position. If anything it seems Germany wouldn´t complain if domestic aggregate demand were contained a little. And the rest be damned!

12 thoughts on ““Saint and Sinners “: Germany & the Periphery”