The abstract to recent research by Ugo Panizza and Andrea F Presbitero on the effects of public debt on growth reads:

Countries with high public debt tend to grow slowly – a correlation often used to justify austerity. This column presents new evidence challenging this view. The authors point out that correlation does not imply causality – it may be that slow growth causes high debt. They argue that policymakers should be wary – the case for cutting debt to boost growth still needs to be made.

Our reading of the empirical evidence on the debt-growth link in advanced economies is:

We realize that our results are controversial. While we are convinced of the soundness of our findings, we know that skeptical readers will find ways to challenge our identification strategy. However, the first two points are uncontroversial. The case that public debt has causal effect on economic growth still needs to be made.

But maybe it´s not the level of public debt that stifles growth, but the size of government as measured by the ratio of government expenditures to GDP (G/Y). Australia, for example, has a relatively low G/Y ratio, but its public debt ratio is not that much different from the average debt ratio in advanced economies.

A few months ago I did a post on that topic. A summary:

In the top part of the table below are the 6 OECD countries which registered the lowest increases in the G/Y ratio between 1960 and 2007 (brake point defined to avoid the “distortions” that followed the onset of the crisis). In the lower part the countries that registered the largest increases. 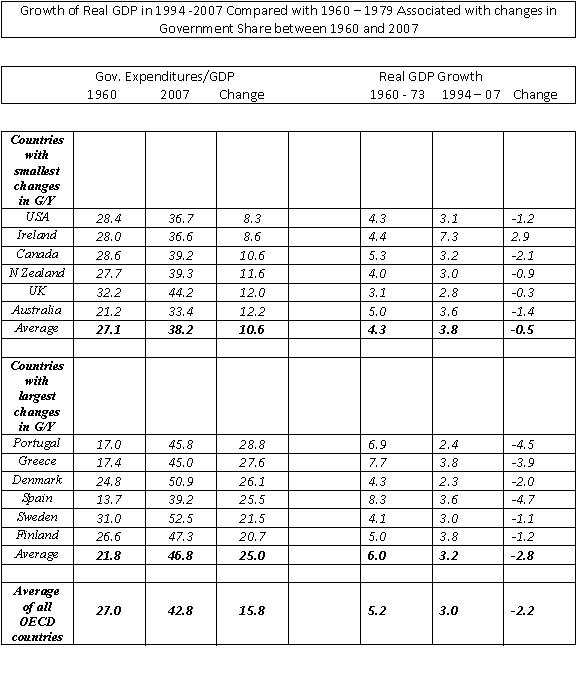 The last three columns show the average real economic growth rates in the first 13 years of the sample, in the last 13 years and the change in growth between the two periods.

Note that three of today´s “crisis countries” – Greece, Portugal and Spain – are also countries that saw the largest increase in the share of government and the largest loss of dynamism, with economic growth rates falling significantly.

8 thoughts on “It´s not so much the level of public debt, but the weight of government that tends to slow growth”