In these circumstances, the entire monetary policy framework is up for grabs. Shibboleths will have to be dispensed with. At zero rates, central banks may have to work increasingly closely with finance ministries, prioritising the need for co-ordinated action over the desire for independence. Inflation targeting may have to be ditched, perhaps replaced by nominal gross domestic product targeting: a slowdown in real growth would then be countered by a commitment to higher inflation, boosting nominal GDP and limiting the risk of ever more indigestible debt.

Yet nominal GDP targeting will work only if central banks can credibly demonstrate not just their desire for higher inflation but also their ability to deliver it. To date, they have not been particularly successful. And if productivity growth is permanently lower, expectations of a life of ever-rising prosperity will have to be abandoned. If the economics are already difficult, the politics will be considerably harder.

Characterizing NGDP Targeting as a framework in which a slowdown in real growth has to be countered by a commitment to higher inflation is a confused idea. A real growth slowdown may be the result of a negative demand shock or of a negative supply shock. In the former situation, inflation will also fall. In the latter it will rise.

If the central bank is focused on delivering Nominal Stability (which NGDP Targeting, level targeting does provide), drops in real growth resulting from monetary shocks will be avoided, while supply shocks will be “ignored”. Actually, the fact that the Bernanke Fed was so focused on the inflation from the rise in oil/commodity prices was its downfall. In that sense, you could say the Fed is flexible in allowing the (temporary) rise in inflation following a supply shock, but to say it has to be “committed” to it is pure nonsense.

The charts provide a visual history of the economy´s nominal and real growth and inflation. 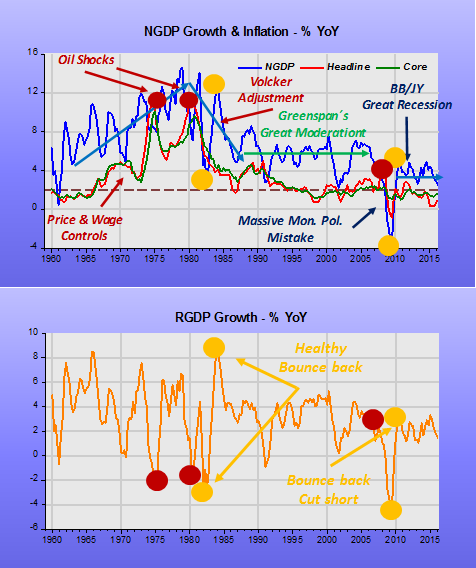 The first thing to notice is that an inflation process (1970s) is characterized by increases in both headline and core measures. This was true in the 1970s and it was made possible by the up trending NGDP growth.

Instances of oil shocks (red dots) are associated with increases in inflation (both Headline & Core) and recessions in the 1970s, but in the 2003-05 and 2007-08 oil shocks, only headline inflation shows a modest increase. The reason for the very different outcomes can be found in the contrasting behavior of monetary policy: very expansionary in the 1970s (up trending NGDP growth) and “stable” in the 2000s.

Volcker´s first attempt at reducing inflation in early 1980 was unsuccessful. His second attempt in late 1981, characterized by a strong monetary contraction (steep drop in NGDP growth) was a success. The important thing to note is the healthy bounce back in real output growth after the deep 1981/82 recession while inflation kept falling.

As soon as he took the Fed´s helm in early 2006, Bernanke showed concern with inflation. With the second leg of the oil price rise in 2007, the concern became an obsession. Monetary policy (NGDP growth) began to tighten and in mid-2008 the brakes were pressed hard. The aftermath, which shows a complete absence of real output bounce back, has kept the economy depressed (or in a state of “Great Stagnation”).

The “Great Moderation” is strong evidence of the benefit of having nominal stability, a situation where the central bank is successful in keeping NGDP growth on a stable (stationary) path. That is the result of the CB offsetting changes in velocity by opposite changes in the money supply.

Note that, by not explicitly targeting NGDP, in 2001-2003, the Fed inadvertently tightened monetary policy. After mid-2003 this error was corrected, with NGDP growth moving back to the stationary path. The Bernanke Fed quickly changed the (effective) monetary policy framework to one first effectively and then explicitly based on inflation targeting. Lately, with inflation persistently below target and “zero” policy rate, the monetary policy framework has become one geared to policy (rate) “normalization”. The manifest failure of this framework has lately been a topic of discussion at the Fed, with John Williams letter being one example.

However, if you pay attention to NGDP growth, you immediately conclude that both the lackluster recovery and low inflation are the natural consequence of excessively tight monetary policy, or too low NGDP growth. This could be “cured” by the adoption of an explicit NGDP Level Target monetary policy framework.

PS The resistance in abandoning the IT framework is strong. This piece by Greg Ip “The Case for Raising the Fed’s Inflation Target”  attests.

We were rightly excited by John Williams letter from San Francisco on Monday as we had already detected stirrings. We and many others were also equally right to wonder what was going on when JW reverted to type on Thursday.

The JW-induced downward move in the USD Index stuck. The move down was against all major currencies but specifically against the JPY where it fell through Y100 to the USD for a while on Tuesday and more persistently on Thursday.

The Japanese were repeatedly browbeaten by the US Treasury when their currency versus the USD had traded up to Y120. They did what they were told, pulling back from more QE. However, the US Treasury campaign still culminated in the creation of the ignominious “monitoring list” in April this year.

Even more USD weakness to come?

The reaction to the idea of further reform of US monetary policy by John Williams ahead of the “Designing … Frameworks For The Future” brainstorming at Jackson Hole was pretty swift. Japanese currency chief called journalists into his office in Tokyo and issued a public warning.

William Dudley and his market-monitoring colleagues on the NY Fed frontline must have either had a call from Tokyo or felt compelled to react first or both. The NY Fed President’s hastily arranged a five minute interview on CNBC attempted to put a floor on this new USD weakness. Very significantly, he failed. Maybe Dudley failed because he looked so ashen-faced. On such things markets move, or rather refuse to move. John Williams’ latest public speech was very much back-to-business as usual for him, but also failed to raise the USD.

However, the NGDP Level Targeting bandwagon may be hard to stop as widely-read commentators as diverse as Larry Summers and Stephen King both weighed into the debate in favour.

Central banks do not act in isolation from one another. The US monetary tightening since mid-2014 has been causing a global slowdown. The active tightening in December 2015 caused global markets mayhem by early 2016. The rowing back from that tightening caused the USD to weaken, particularly against the JPY.[See chart above]

Ironically, if the US were to adopt NGDP Level Targeting it would lead to a stronger US economy and alleviate the pressure on the currency. The markets do not see it that way at the moment, though.

Most of the world’s central banks have had to pull back from their post-2009 tightening, the Federal Reserve probably will be no different. But it will cause a lot of major ripples, no doubt. Things are complicated.