Brad DeLong writes “The Six Major Adverse Shocks that Have Hit the U.S. Macroeconomy since 2005”:

Talk to people at the Federal Reserve these days about how they feel about the institution’s performance during the seven very lean years from late 2008 to late 2015, and they tend to be relatively proud of how the institution performed. Almost smug.

Why? Well, let me pull out my old workhorse-graph of the four salient components of U.S. aggregate demand since 1999

And repeats the chart 5 times, each time emphasizing a different demand component.

He could have saved time and space and put up the only chart that matters, which also indicates that the Fed cannot be proud or smug about its performance. That´s the NGDP Gap chart, which shows that the Fed began the road to perdition in early 2008 and later failed to “turn the boat around”!

The problem is simple: Greece’s creditors insist on even greater austerity for this year and beyond – an approach that would impede recovery, obstruct growth, worsen the debt-deflationary cycle, and, in the end, erode Greeks’ willingness and ability to see through the reform agenda that the country so desperately needs. Our government cannot – and will not – accept a cure that has proven itself over five long years to be worse than the disease.

Our creditors’ insistence on greater austerity is subtle yet steadfast. It can be found in their demand that Greece maintain unsustainably high primary surpluses (more than 2% of GDP in 2016 and exceeding 2.5%, or even 3%, for every year thereafter). To achieve this, we are supposed to increase the overall burden of value-added tax on the private sector, cut already diminished pensions across the board; and compensate for low privatization proceeds (owing to depressed asset prices) with “equivalent” fiscal consolidation measures.

The view that Greece has not achieved sufficient fiscal consolidation is not just false; it is patently absurd. The accompanying graph not only illustrates this; it also succinctly addresses the question of why Greece has not done as well as, say, Spain, Portugal, Ireland, or Cyprus in the years since the 2008 financial crisis. Relative to the rest of the countries on the eurozone periphery, Greece was subjected to at least twice the austerity. There is nothing more to it than that.

Not so fast Yanis! I concur that largely, the EZ crisis was mostly an NGDP (i.e. monetary crisis). The charts show that clearly. (Note: the scale is the same in all charts) 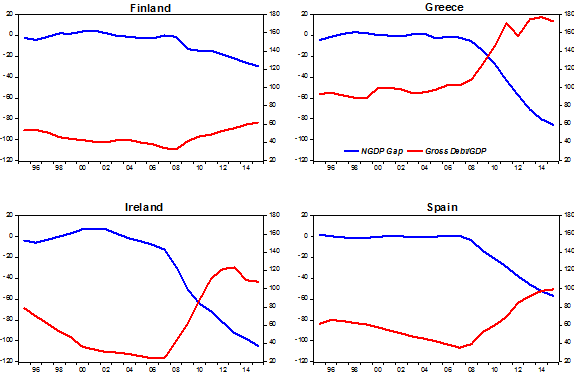 Greece has not done as well as Spain or Ireland mostly because initial conditions in Greece were much “worse”. While Spain and Ireland were forcefully reducing their government debt ratios before the crisis, reaching debt ratios of less than 40% and 30%, respectively, Greece´s debt ratio remained at the 100% level.

Also, Greece had the highest structural deficit relative to potential GDP going into the crisis, so naturally, Greece had to be more “austere” than either Ireland or Spain. There´s also the fact that Greece´s credibility is extremely low!

Following Prime Minister David Cameron’s recent election victory in the United Kingdom, my good friend Lord Norman Lamont, a former chancellor of the exchequer, remarked that the UK economy’s recovery supports our government’s position. Back in 2010, he recalled, Greece and the UK faced fiscal deficits of more or less similar size (relative to GDP). Greece returned to primary surpluses (which exclude interest payments) in 2014, whereas the UK government consolidated much more gradually and has yet to return to surplus.

At the same time, Greece has faced monetary contraction (which has recently become monetary asphyxiation), in contrast to the UK, where the Bank of England has supported the government every step of the way. The result is that Greece is continuing to stagnate, whereas the UK has been growing strongly.

Not quite true. In 2010, Greece´s Structural Deficit relative to potential GDP was about 50% higher than Britain´s, but I agree that Greece has experienced “monetary asphyxiation”. The UK is fortunate to have an independent monetary policy!

Bottom Line: If Greece was willing to “get in bed” with the likes of Germany, now it must try to become more like them, and if that´s not palatable…

The financial crisis broke out seven years ago and led many countries into an economic and debt crisis. A pervasive set of myths — that the European response to the crisis has been ineffective at best, or even counterproductive — is simply not accurate. There is strong evidence(!) that Europe is indeed on the right track in addressing the impact, and, most importantly, the causes of the crisis. Let me run through some of these myths.

My diagnosis of the crisis in Europe is that it was first and foremost a crisis of confidence, rooted in structural shortcomings. Investors started to realize that the member countries of the eurozone were not as economically competitive or financially reliable as the uniform bond yields of the pre-crisis years had suggested. These investors began to treat the bonds of certain countries with much more caution, causing interest rates for those bonds to rise. The cure is targeted reforms to rebuild trust — in member states’ finances, in their economies and in the architecture of the European Union. Simply spending more public money would not have done the trick — nor can it now.

The priorities for Germany, as the current president of the Group of 7 nations, are modernization and regulatory improvements. Stimulus — both in fiscal and monetary policy — is not part of the plan. When my fellow finance ministers and the central bank governors of the G-7 countries gather in Dresden at the end of next month we will have an opportunity to discuss these questions in depth, joined — for the first time in the G-7’s history — by some of the world’s leading economists. I am confident that we can reach some common ground in Washington in advance of that meeting.

Maybe Germany´s Finance Minister has a “euro death wish”! A real Greek exit, not just Grexit, is upon us, ever more likely. With that the whole will be broken and the euro will be perceived as just another (likely to fail) fixed exchange rate arrangement!

The NGDP contrast between core and periphery (with Greece as the “benchmark).

Schaüble´s idea that “many European countries are reaping the rewards of reform and consolidation efforts” is risible. Just compare RGDP in the EZ with RGDP in the US since the 2007 cyclical peak.

I wonder who “some of the world´s leading economists” attending the G-7 will be.

Update: You really can´t square Schaüble´s “The financial crisis broke out seven years ago and led many countries into an economic and debt crisis” with the facts, especially regarding Spain, whose debt/gdp at 36% in 2007 was one of the lowest in the EZ (and at that point Spain was running a fiscal surplus!). It looks and feels like a monetary induced NGDP crisis!

That is implied by this Gavyn Davies piece “Who is right about the equilibrium interest rate?”:

The equilibrium real interest rate continues to lie at the heart of discussions about economic policy in the US and elsewhere. Ben Bernanke has written that the equilibrium rate, and not the FOMC, is the ultimate determinant of interest rates in the economy, and claims that it is discussed at every Fed meeting. The recent debate about secular stagnation between Mr Bernanke and Lawrence Summers centres on a difference about the future path for the equilibrium rate. And Cleveland Fed President Loretta Mester says that it is “the issue policy makers are grappling with” at the FOMC.

If, for example, the Fed sets short rates higher than equilibrium, the economy will respond by generating a rise in unemployment and inflation will fall below target. And vice versa. Mr Bernanke believes that the equilibrium real rate is currently abnormally low, but that it will rise gradually in the next few years as economic “headwinds” abate. This justifies a large part of the rate increase shown in the dots chart, a view also explicitly stated by Ms Yellen in her speech on policy normalisation.

Regarding the “telltale” signs from inflation and unemployment to guide the “appropriateness” (relative to the “phantom rate”) of the FF rate, what was happening in 2007-08? And what is happening now?

In 2007-08, Bernanke and the FOMC only had ears for the “siren” of headline inflation, all due to the oil price shock, and couldn´t hear the “muted sound” of core inflation. Plus, unemployment was almost imperceptibly rising, at least initially.

Since headline inflation was rising but unemployment was more or less stuck initially, probably the Fed thought that the “phantom rate” was above the FF rate, which made the Fed reduce the FF rate (after the Bank Paribas affair in August 2007) very parsimoniously. In fact, from April to September 2008 the FF rate remained at 2% (with a bias to increase!)

For the past three years inflation has been falling and is below target, but unemployment insists in falling, “messing up” the signals that inform the Fed about the “phantom rate”, resulting in a “stand-off”  that brings forth a lot of “noise” from policymakers.

If the Fed were to stop trying to figure the “phantom rate” and instead observe the very visible behavior of nominal aggregate spending (or NGDP), it could have tried to save the “plane from dropping too low” in 2008.

Now that the “plane has dropped too low”, the previous height may not be attainable. But all signals are that there exists an attainable intermediate height that the “captain” could aim for. But that height NGDP level is for the “tower” Fed to specify. Given that the plane´s engines economy has taken a beating, the previous “cruise speed” may have to be lowered. No matter, both labor and capital will “rejoice”. 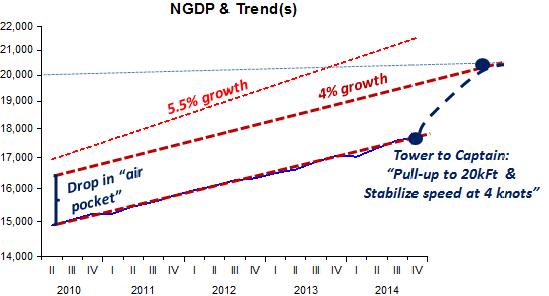 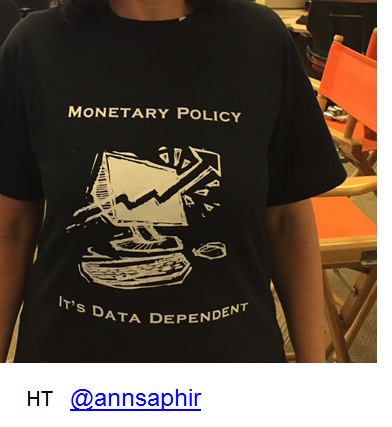