There has been an illuminating exchange between Scott Sumner and Nick Rowe with John Handley who has been defending bravely New Keynesian models. New Keynesians wonder why QE at the ZLB hasn’t been effective in raising inflation. To me the best the reply is: central banks don’t want to raise inflation.

The central banks seem to define inflation as inflation two years out, that is expected inflation, based on their own “official” expectations. And, therefore, central bankers are on target with their own targets.

The evidence is clear in the charts and tables below, unanimously modelling a return of inflation.

So they just patiently, or often impatiently, wait for near term inflation to behave as their models predict so they can move rates as they plan: up in the US and the UK, hold flat in Japan and the EuroZone.  And the central bankers are slaves to these models.

The markets understand all this: that it is the two-year out inflation outlooks that drive monetary policy. For the Fed and the BoE monetary policy may even be a little too loose, certainly if they don’t raise rates in line with their guidance. The Bank of Japan seems to think it can just stand pat. And that maybe the EZ is a little worried that its two year out projection is a bit too low, and so is muttering about using some more tools.

All four central banks use mainstream New Keynesian models. So what is wrong? Inflation never seems to rise to the two-year out expectations. We have been there many times over the last several years as “inflation” keeps disappointing these determinedly mainstream models. So the market is really asking: at what point will the mainstream economics realise there is something wrong with their models? While the markets wait to find out, nominal growth will continue stalling, fearing that these New Keynesian slaves wont’ change their models but find a reason to raise rates – see our very last chart from the Bank of England desperately searching for an inflation pickup.

Flexible inflation targets would be better, but inflation is a poor economic measure. No one really knows when overall prices rise or fall, it is too difficult to observe. And there is total confusion about individual or particular baskets of goods and services price changes being due to quality changes or not, to mix changes or not.

Just target total nominal incomes, spending or output and forget about inflation. Five percent nominal growth will give enough flexibility for economies to ride the real economy cycles and not cause real economy mayhem due to downwardly sticky wages.

The Federal Reserve Board of Governors forecast in September 2015: PCE “inflation” will be at 2% in late 2016, assuming it raises rates in line with its guidance.

Federal Reserve “guidance” on rates from the same report

The ECB staff projection in September 2015 forecast  HICP “inflation” will be at 2% in late 2016, assuming it raises rates in line with its guidance.

ECB “guidance” on rates from the same report.

The Bank of Japan’s macroeconomic model in October 2015 forecast  (All Items Less Fresh Food) “inflation” will be at 2% in late 2016, assuming it raises rates in line with its guidance.

The Bank of England’s macroeconomic model in August 2015 forecast CPI “inflation” will be at 2% in late 2016, assuming it raises rates in line with its guidance.

Bank of England interest rate “guidance” from the same report. 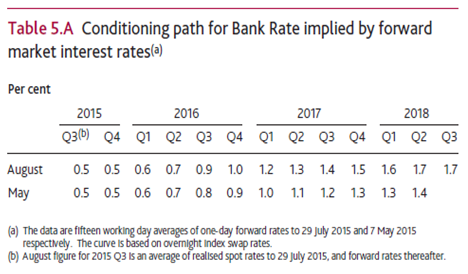 Evidence of just how watchful central banks are about inflationary pressures coming up on the blind side and biting in the back is the chart from the same BoE August 2015 inflation report. The chart heading reveals a lot about the thinking at the BoE. A “slight pickup in consumer goods inflation” is evidenced by a “rise” from an actual negative rate of 0.25% to a positive 0.05%. Whereby the official CPI projection has some appropriately wide fan charts to show the degree of error, when it comes to spotting future pressures the error charts disappear.