As I will show, it has also been doing NGDP-LT, albeit with a “variable” Level Trend. It´s amazing that it took them one and a half years to come up with a framework that had been in place for so long!

The chart below shows that the core PCE has closely followed the trend (estimated from 1992 to 2005). The trend reflects a 1.8% average inflation, not the 2% average target, but close. 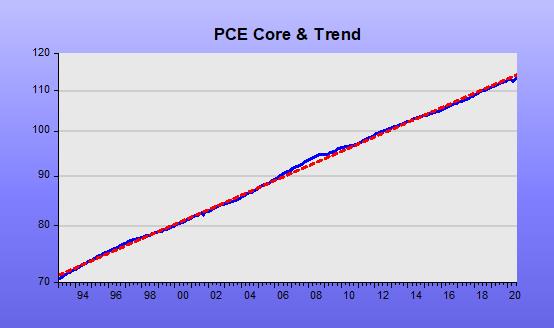 To illustrate the fact that the Fed has effectively been practicing AIT, I zoom in on two periods (outside the estimation interval) to show an instance of adjustment from above and one from below. 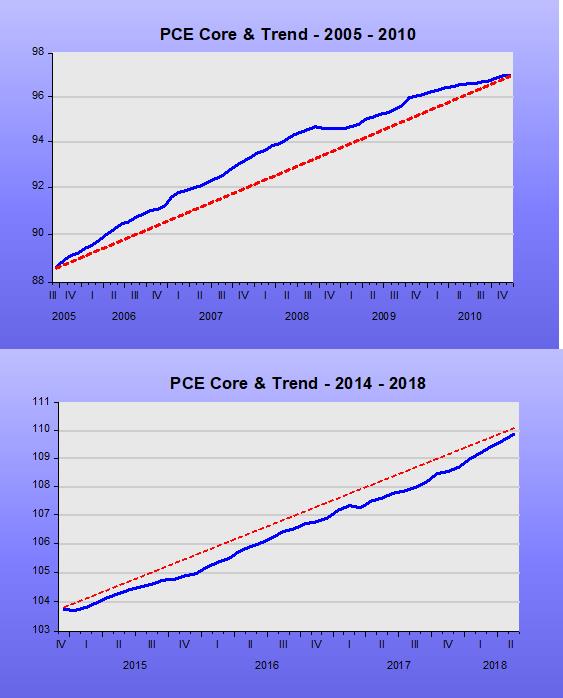 Even now, after the Covid19 shock, it is trying to “make-up”! 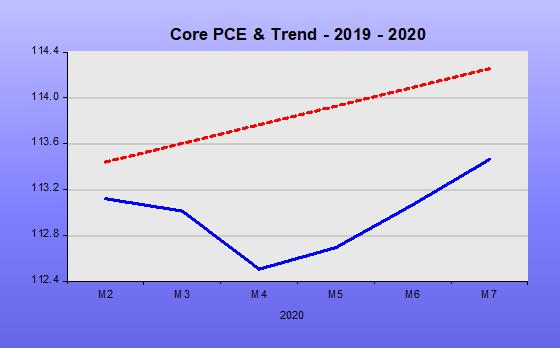 The “other Policy framework” the Fed has been “practicing” with for over three decades is NGDP Level Targeting.

The set of charts below show how NGDP has evolved along the same trend during different periods. 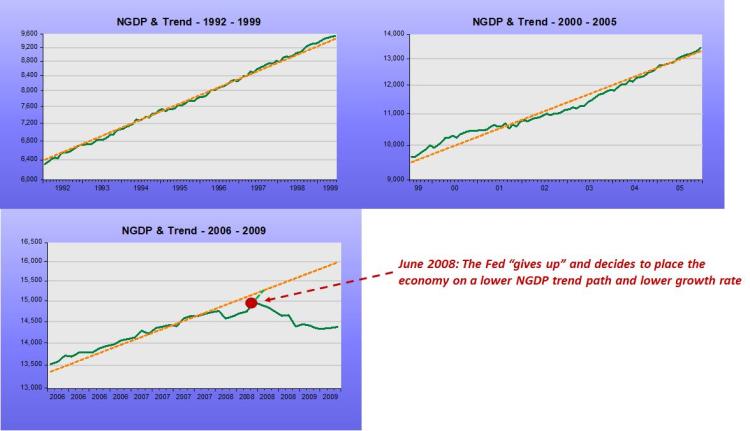 The following chart zooms in on 1998 – 2004 and shows that the Fed first was excessively expansionary (reacting to the Asia & Russia +LTCM crises) and then “overcorrecting” in 2001-02 before trying to put NGDP back on the level trend, which it did by 2004. Many have pointed out that the Fed was too expansionary in 2002-04, blaming it for stoking the house bubble and the subsequent financial crisis. However, the only way the Fed can “make-up” for a shortfall in the level of NGDP is for it to allow NGDP to grow above the trend rate for some time! 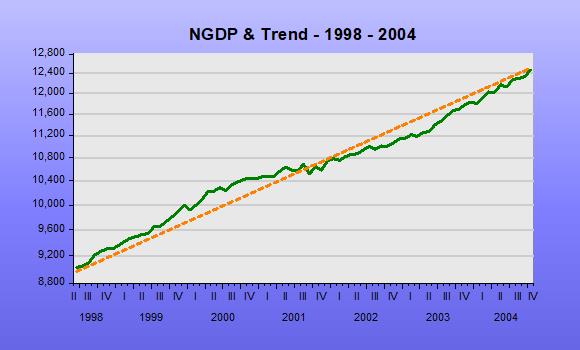 As the next to last chart shows, 2008 was a watershed on the Fed´s de facto NGDP-LT framework. As shown in the chart, in June 2008 the Fed “gave up” on the strategy, “deciding” it would be “healthier” for aggregate nominal spending (NGDP) to traverse to a lower level path and lower growth rate.

If you doubt that conjecture, read what Bernanke had to say when summarizing the June 2008 FOM Meeting.

“I’m also becoming concerned about the inflation side, and I think our rhetoric, our statement, and our body language at this point need to reflect that concern. We need to begin to prepare ourselves to respond through policy to the inflation risk; but we need to pick our moment, and we cannot be halfhearted.”

He certainly got what he wished for.  As the next chart indicates from the end of the Great Recession to just prior to the Covid19 shock, NGDP was spot on the new lower trend path alongside a reduced growth rate. 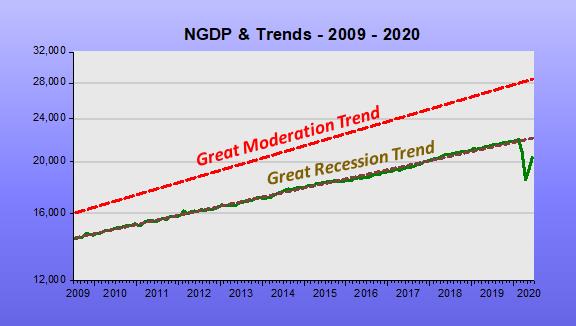 The Covid19 shock tanked NGDP. This was certainly different from what happened in 2008. Then, it was a monetary policy “choice”. Now, it was virus related. The other thing is that at present, instead of being worried about inflation being too high or risking getting out of control, the fear is with inflation being too low.

That worry, which has been evident for some time, led that Fed to unveil a new monetary policy framework, AIT, for average inflation targeting. As I argued before, this framework has been in place for decades!

The last chart above indicates that monetary policy is “trying” to make-up for the drop in NGDP from the “Great Recession Trend” it was on. We also saw that the Core PCE Index is on route to get back to its decades-long trend.

Given that inflation is a monetary phenomenon, these two facts are related. For inflation to go up (as required to get the price level back to the trend path) NGDP growth has to rise. However, many FOMC members are squeamish. We´ve heard some manifest that they would “be comfortable with inflation on the 2.25% – 2.5% range”.

The danger, given the presence of “squeamish” members, is there could come a time when the Fed would reduce NGDP growth before it reached the target path. Inflation would continue to rise (at a slower, “comfortable”, rate) and reach the price path while, at the same time, the economy remains stuck in an even deeper “depressive state” (that is, deeper than the one it has been since the Fed decided in 2008).

That is exactly what happened following the Great Recession. NGDP growth remained stable (at a lower rate than before) and remained “attached” to the lower level path the Fed put it on.

“What anchors trust in the central bank is that our objective and strategy stay constant–and this is even more important when monetary policy becomes more unconventional,” he said. “For this reason, innovative ideas to change our strategy, such as targeting a price level, would in fact be counterproductive in the current environment.”

The ECB´s target is an inflation rate close to but slightly below 2%. From 1999 to 2007 they did an almost perfect job, with inflation averaging 2%. Over the last few years, however, inflation has been on a downtrend and has recently even become negative!

The chart shows what happens under the IT and PLT alternatives. Given that the price level has fallen significantly below the 2% trend line from 1999, if, as Mr Mersch prefers, the ECB keeps to its IT strategy, the price level will be permanently lower. This means that the ECB will not be ‘penalized’ for having missed the inflation target for a long time. It´s sufficient that from now on it hits it! 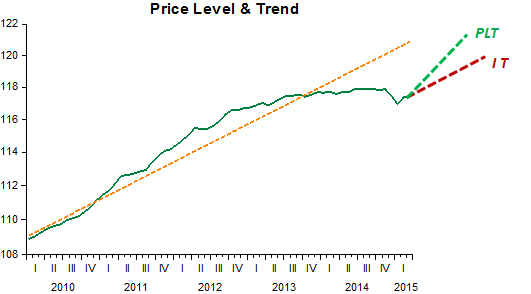 Adopting a price level target, on the other hand, would force the ECB to offset its previous error. Temporarily, inflation would be higher than 2%, which, in any case, is exactly what´s needed!

It would be even better if, instead of a price level target the ECB adopted an NGDP level target, but that would be asking too much from such a conservative body.

Previous work by the author in 2008 and 2012 argues that former Fed chairmen Paul Volcker and Alan Greenspan followed a nonactivist rule during the period known as the Great Moderation, the years following the Volcker disinflation through the Greenspan era. Although the FOMC does not explain the rationale for its policy actions within the framework of a rule, since this era, policymakers have recognized the need to behave in a consistent, committed way to shape the expectations of financial markets.

The chart provides the view of NGDP growth and inflation for the last 60 years. 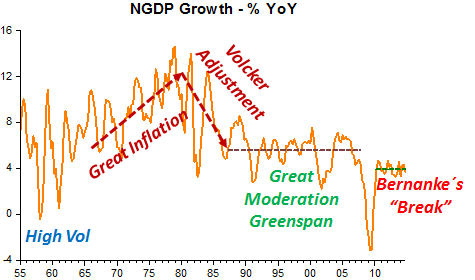 Initially NGDP growth is highly volatile (but trendless). From the mid-60s to 1980, NGDP growth trends up, and so does inflation. The Volcker adjustment was a period when NGDP growth was strongly reduced with inflation being brought down significantly.

Note that from the start of Greenspan´s Great Moderation, NGDP growth is stable, but inflation continues to come down, only reaching the (implicit) 2% target in the mid-90s.

As Hetzel notes, the Fed, particularly Greenspan, never explained the rationale for its policy actions within the framework of a rule. As such, the Taylor-rule was an attempt by John Taylor to describe (guess, make-up) a “rule” that was consistent with what the Fed was doing. With time, given the highly successful monetary management of that period, Taylor and his followers want us to believe that the “rule” was responsible to the period´s success!

From the chart, it appears much more likely that the “success” (defined by inflation falling and remaining low and stable) was mainly due to NGDP growth remaining stable.

The chart on RGDP growth tends to corroborate that view. 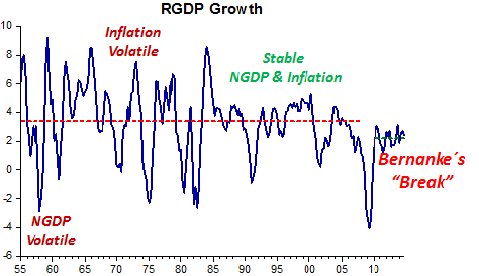 Which leads me to the second passage of Hetzel´s essay I want to highlight:

If trend real GDP growth is stable and policy is credible so that the expectation of inflation is aligned with the FOMC’s inflation target, as it was for most of the 1990s, these procedures translate into stable trend nominal GDP growth. Note, however, that this fact does not imply that the FOMC had a target for nominal GDP.

It would seem that a stable NGDP growth is the outcome, or result, not the driver! That´s the reason for him to suggest that NGDP may be a good benchmark (although not a target).

My first observation is that trend real growth has been stable since the 19th century! It´s not a characteristic of the 1990s. The top chart shows RGDP and trend from 1870 to 2011 (yearly data). Trend growth is 3.4%. The bottom chart, based on quarterly data from 1954 to 2014, shows that trend growth is also 3.4% (up to 2007). Note that following the Great Depression, RGDP reverted to trend. Will the post 2007 period become known in 50 years’ time as “the Bernanke Break”? 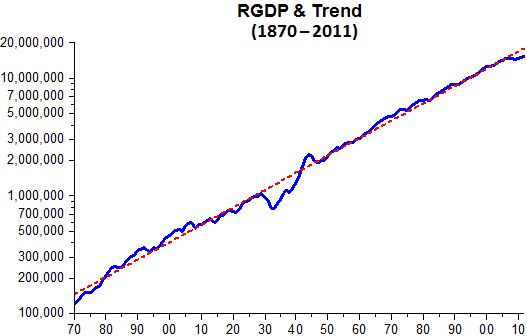 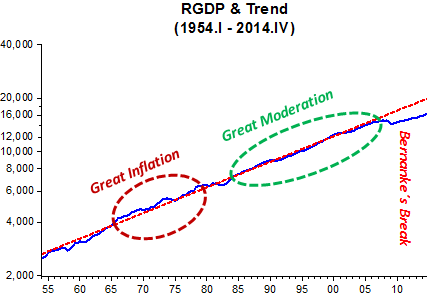 My second observation is that during the 1990s, since the US did not have an explicit inflation target, policy credibility cannot be defined as the “alignment of inflation expectations with the FOMC´s inflation target”. The FOMC´s “target” was “low” inflation, something vague. In the course of the 1990s, the Fed gained credibility because inflation remained “low”. My conjecture is that that´s the outcome of NGDP growth evolving stably along a level trend path.

The panel below indicates my conjecture has some validity. From the early 90s to early 2008, you could say the Fed “targeted” inflation, not at 2% but in a band of 1% – 2%. You could also say it targeted the price level (PLT) close to a 2% trend growth, but you could also say the Fed targeted NGDP along a 5.5% trend level path. 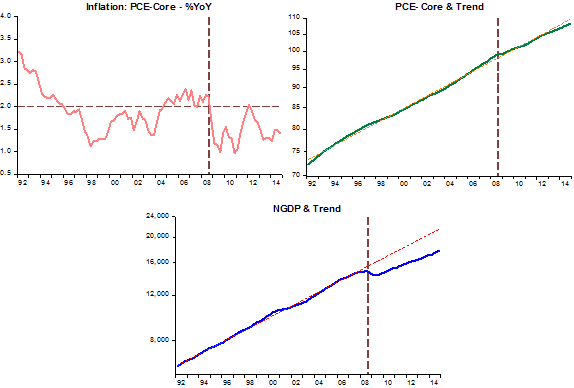 The “Bernanke Break” serves to show that what “held everything together” was keeping NGDP evolving stably along a level path. In 2008 it wasn´t inflation or the price level that indicated something was wrong. The “dog that barked” was NGDP dropping significantly and “permanently” below the trend path!

But by all means, if there are reservations to a formal NGDP level targeting, use it as a benchmark. If the Fed had done so in 2008, things would be much less dire in 2014, and we would not be having ridiculous discussions about “GSG”, “SS” or about “June”, “September” or “whatever”! Or see things go topsy-turvy as suggested by this piece by Binyamin Appelbaum ( HT Peter Ireland):

At a hearing in February, Representative Scott Garrett, a New Jersey Republican, complained that Congress and the Federal Reservehad traded places.

During previous periods of high unemployment, members of Congress pressed the Fed to print more money even as the Fed remained wary of the inflationary consequences of such efforts.

After the Great Recession, by contrast, the loudest criticism has come from politicians demanding that the Fed shut down its printing press and raise interest rates.