By paying attention to the very “top”, they miss the “tumbling action at the bottom”!

And firmly believe that what´s (temporarily) constraining inflation from climbing to target is the behavior of oil prices and the dollar!

According to the news:

Examples from the mid-1990s and early 2000s show the Greenspan years. For the last ten years, we have been under Bernanke and Yellen. The pictures are illustrative. (The montlhy NGDP numbers come from Macroeconomic Advisers)

Throughout the period, inflation was not a problem. By the mid-1990s, it had reached the “low and stable” target of the time. Ironically, after the numerical 2% target was set in January 2012, inflation has languished, but is still “low and stable”!

But if you zoom in on the past 15 months, things seem “fishy”. For all the Fed´s “communication”, the truth is that they have been tightening policy. NGDP growth is coming down which was shortly followed by decreasing employment growth. Won´t even mention inflation. 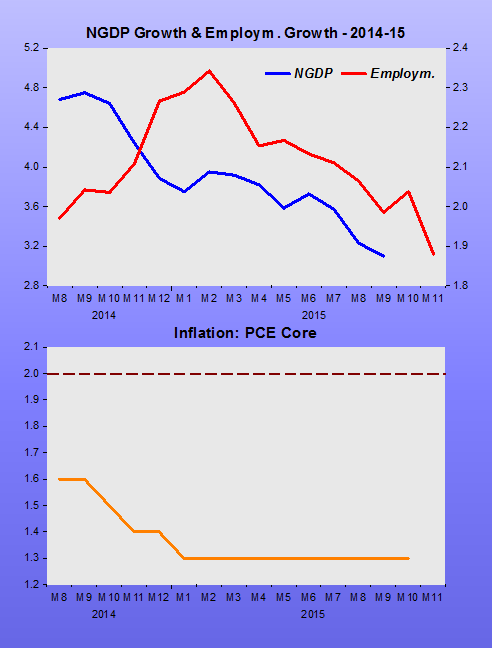 To wrap up, where´s the much touted wage growth-inflation nexus so cherished by some at the FOMC?

PS If you don´t believe me about the “beauty” of stable nominal spending, believe George Selgin:

a central bank that allows the overall volume of spending to collapse has blown it, no matter how much emergency lending it undertakes.  Indeed, to the extent that a central bank engages in emergency lending while failing to preserve aggregate spending, it may be guilty of compounding the damage attributable to the collapse of spending itself with that attributable to a misallocation of scarce resources in favor of irresponsibly-managed firms.

The pity is that they are wrong beliefs! From the September 1996 FOMC:

…I believe that a very solid case can also be made for raising the federal funds rate at least modestly, by 25 basis points, on the grounds that the unemployment rate has notched down further, the decline in labor market slack is palpable, and the odds of a rise in the inflation rate have increased, whatever the level of the NAIRU and the associated level of those odds. I believe I am echoing Governor Meyer in saying that I favor a policy approach in which, absent clear contra-indications, our policy instrument would be routinely adjusted in response to changing pressures on resources and movements in actual inflation.

She clearly belongs in the “accelerationist” camp recently defined by Justin Wolfers, where the other camp is the “inflation targeters”, to which Bernanke belonged:

What does this mean for the Fed? It’s too simple to characterize the current debate as one between hawks who dislike inflation and doves who are more concerned about unemployment. Rather, the main divide may be between accelerationists worried that rising wage growth signals an economy at full capacity, versus inflation targeters, who argue that weak wage growth signals that unemployment remains too high. And in the next few weeks, we’ll find out who’s winning that argument.

How did things work out in 1996 and what´s the scenery now?

After Yellen´s “solid case” for a modest rate rise in September 1996, wage growth continued to increase, unemployment continued to fall and so did inflation!

After the July 2014 FOMC Meeting, when it became clear that QE3 was about to close (taper would begin in October), unemployment continued to drop, but notice that wage growth and inflation turned “south”.

Friedman and Bernanke agree that interest rates are a bad indicator of the stance of monetary policy (which controls the economy´s “temperature”). It is much better, according to Bernanke, to look at what´s happening to NGDP and inflation.

By clinging to her “Phillips Curve Faith”, the odds that Yellen´s Fed will make a big mistake in the foreseable future are rising!

Yellen and other high-ranking members of the FOMC are partial to the following type of statement:

There is good reason to believe that inflation will move higher as the forces holding down inflation dissipate further.

One of those forces is the price of oil. 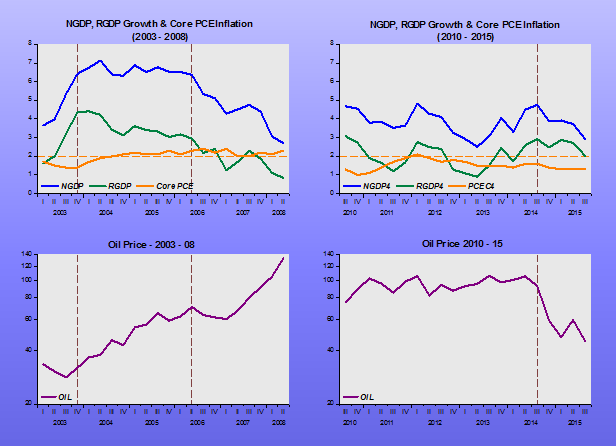 What to expect when there is an adverse supply shock like an increase in the price of oil? The dynamic AD-AS model tells us that inflation will tend to rise and real growth to fall. In that situation, the best the Fed can do is to maintain nominal spending (NGDP) growing in a stable manner.

Looking at the left side charts, we see that´s exactly what happened, at least until early 2006. Inflation went up a bit and real growth decreased somewhat, but nominal spending growth remained stable. Bernanke took over the Fed as the first oil shock was ending and immediately (given his inflation targeting “preferences”) allowed NGDP growth to falter.

Soon after, the second oil shock materialized, putting pressure on headline inflation (not shown). NGDP growth continued to fall, magnifying the fall in real growth from the oil shock. We know that after mid-2008 NGDP growth tumbled, being negative for the first time since 1937.

The right hand side of the chart depicts the economy over the last five years, after the worst of the crisis passed. Note that inflation was slowly falling long before the drop in oil price in mid-2014.

Why do they expect inflation to move higher, if they are constraining NGDP growth? They´ll be surprised when real growth (in addition to inflation) falls when oil prices dropped!

An economic impossibility theorem: You cannot have rising inflation without rising NGDP growth!

Maybe from her Phillips Curve upbringing. In her Congressional Testimony today, she said:

“I see underutilization of labor resources as having diminished significantly,” Yellen said, with inflation expected to rise over the medium term.

The Fed is “expecting the economy will continue to grow at a pace to return inflation to our target over the medium term,” she said. “If the incoming information supports that expectation … December would be a live possibility” for a rate increase, Yellen added.

The central banks seem to define inflation as inflation two years out, that is, expected inflation based on their own “official” expectations. And, therefore, central bankers are on target with their own targets.

While she expects inflation to rise over the medium term, market based inflation expectations have fallen significantly since July.

Neither does history provide evidence for her “wishes”. The chart shows nominal and real growth and inflation over a five year period following the 1990/91, 2001 and 2008/09 recessions!

And Chairwoman Yellen has forever held the belief that Phillips Curve/NAIRU is the “best inflation indicator”.

In his Final Thoughts on September, Tim Duy writes:

I expect the Fed will ultimately pledge allegiance to the Phillips curve. I think they believe that stable inflation is incompatible with sub-5% unemployment if short term interest rates remain at zero. Hence, they will signal that the first rate hike is imminent.

While a BoG member in 1996, she teamed up with PC/NAIRU other big fan Laurence Meyer:

A second justification for policy change would be the conviction that we are already below NAIRU and not likely to move back to it quickly enough to prevent an uptick in inflation. This is basically the staff forecast, and my view has been and continues to be that this is the most serious risk factor in the outlook. Yet, we get stuck in place because we continue to be confronted by the reality of stable to declining core inflation in the face of this prevailing low unemployment rate. So, we wait for additional data to resolve our doubts. The risk of waiting, judging from the modest rise in inflation in the staff forecast, is not very great. Still, it is probably worthwhile noting that in all of the five private-sector forecasts that I looked at, there are increases in core inflation over the next year or two. That is a pervasive tendency that just about everybody is worried about. I think we need to keep that in mind.

To my mind, labor markets are undeniably tight. You remarked last time, Mr. Chairman, that we should be careful not to lull ourselves into a false sense of security about incipient wage pressures by reading too much into that suspiciously low third-quarter ECI, and I agree with that. So, I still feel that we need to avoid complacency about the potential for inflationary pressures to emerge from the labor market down the road.

This chapter’s analysis of macroeconomic policy and performance concludes that the economy should continue to grow with low inflation in 1998. The chapter begins with a review of macroeconomic performance and policy in 1997, to show in some detail where the year’s growth came from and how inflation remained so tame. The second section examines the important question of whether our understanding of inflation and our ability to predict it have changed in significant ways. This question is part of a broader inquiry into whether the economy has changed in such fundamental ways that standard analyses of how fast it can grow without inflation need to be replaced with a new view. The conclusion reached here is that no sea change has occurred that would justify ignoring the threat of inflation when the labor market is as tight as it is now;

In a few hours we´ll know if beliefs changed!

Just two days ago, I had something to say on the Fed and the Phillips Curve. Today, Tim Duy concludes, after a lengthy discussion of all the wrong arguments for a rate rise in September:

But if they take that risk, it won’t be because they want to send the markets a message that they are in charge, or that the “Greenspan put” needs to be put to rest, or that they can’t been seen as cowering to the markets, or that they need to stay the course because they already signaled a rate hike, or because foreign central bankers are demanding the Fed hike rates, or because they need to build ammo for the next crisis, or any other reason that comes from barstool moralizing after one too many. If they hike rates it will be for one simple reason: The recent market turmoil does little to shake their faith in the Phillips Curve. That would be the heart of their argument. And if you are arguing for September, that should be the heart of your argument as well. 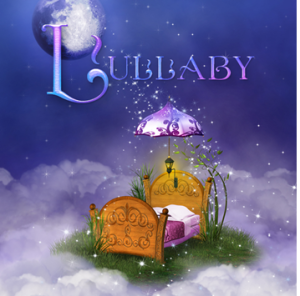 No matter all the evidence against “Phillips Curvism” that has accumulated over the decades, the FOMC still finds “comfort” in it!