US RGDP surprisingly disappointed today with just 1.2% QoQ annualised growth and, coincidentally, 1.2% YoY growth too. A lot of the weakness in real growth was due to perhaps noisy factors like inventories. However, even final sales are weakening. Household spending (PCE-Personal Consumption Expenditure) was also nothing exciting on a YoY basis at just 3.7%. Investment growth is now in negative territory.

The main story of today’s release is the horrible NGDP growth print for 2Q. The trend is even worse than we have been worrying about. The second quarter YoY growth rate was a mere 2.4%. This is well below the near 3% being seen in the supposedly sick Euro Area.

The charts indicate very clearly that since mid-2014, when the Fed began the on-off rate hike talk, nominal trends have been down. RGDP growth simply cannot blossom in such an environment. 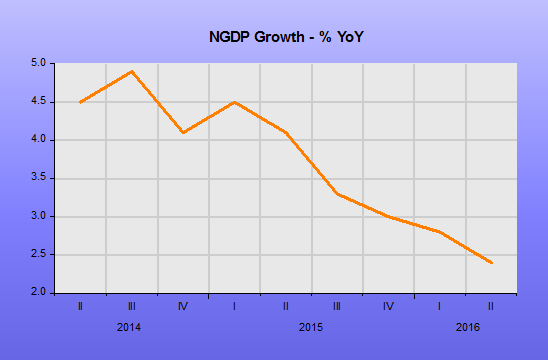 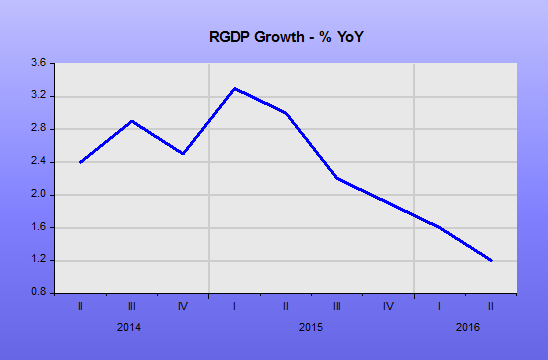 US slower real growth than France

Many were laughing about the 2Q RGDP figure for France today, but at 1.4% YoY it has grown faster than the US for the last 12 months. The Euro Area as a whole did better than France, growing 1.6% YoY in the second quarter.

This isn’t a complete surprise to us who have been pointing out the better news from the  Euro Area for some time. The reason is that monetary policy is so much easier in the Euro Area than the US. The ECB is on the front foot with Base Money growing at 40%+ a year versus negative 5% per year in the US.

3 thoughts on “The Fed is failing: US NGDP growth crash”