They haven´t yet figured out that it´s the data that is Fed-dependent:

Federal Reserve Bank of San Francisco President John Williams played down a “low” reading on second-quarter U.S. growth and said the economy could still warrant as many as two interest-rate increases this year — or none.

“There’s definitely a data stream that could come through in the next couple of months that I think would be supportive of two rate increases,” Williams told reporters Friday after speaking in Cambridge, Massachusetts. “There’s data that we could get that wouldn’t be supportive of that — it could be one, maybe, or none. Time will tell.

“We’re still hopeful for solid GDP growth this year, and the basis for that is the consumer,” Kaplan told reporters at an event in Albuquerque, New Mexico,

For the past two years, both the nominal and real economy have been weakening. All the while, inflation has been “dead in the water”. 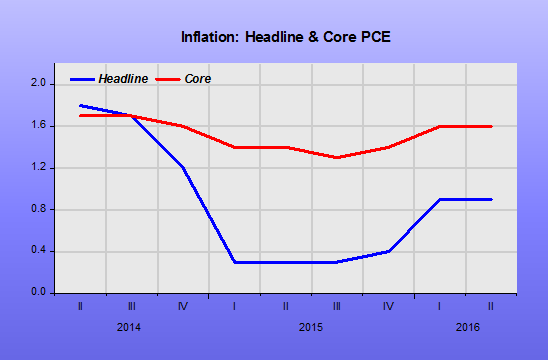 4 thoughts on “At the FOMC, anything goes!”