But some Keynesians keep pretending that demand is the only problem facing the world.  It’s not; the supply side has been gradually deteriorating for more than a decade.  Brexit will make this problem even worse.

Political outsiders have had quite a good year in the United States (and elsewhere), and many pundits have attributed their success to voters’ profound dissatisfaction with the economy. Certainly there is plenty to be dissatisfied about, including growing inequality of income and wealth and stagnation in real wages. But there are positives as well, including an improving labor market, low inflation, and low gasoline prices. How do people really feel about the U.S. economy?

[Unfortunately, all the “positives” are a consequence of his monetary policy errors]

In a highly polarized environment, with echo-chamber media, political debates often become shrill, and commentators and advocates have strong incentives to argue that the country’s future is bleak unless their party gains control. In this environment, it seems plausible that people will respond more intensely and negatively to open-ended questions about the general state of the country, while questions in a survey focused narrowly on economic conditions elicit more moderate responses. Without doubt, the economic problems facing the country are real, and require serious and sustained responses. But while perceptions of economic stress are certainly roiling our national politics, it may also be that our roiled politics are worsening how we collectively perceive the economy.

[More likely, it is the way we collectively perceive the economy that is shaking our politics]

For many years (decades in the case of the US and UK) before the “crisis”, the big developed economies (ex-Japan) were doing well. There was no suggestion of “new normal”, “great stagnation” or “depression”. The “supply-side” seemed just fine. Suddenly, almost as if central bankers were perfectly “coordinating”, those economies were walloped!

The first panel shows how central banks were de facto targeting NGDP-LT. The result was nominal stability (that includes low/stable inflation). Maybe because they thought they were targeting inflation, when oil prices pressured headline inflation they simultaneously freaked.

When central banks pulled up the hand brakes with force, the real economy was squeezed. As I argued here, the Fed (and the other central banks) seem to be happy with where the economies are. And if they are happy, that´s where they will stay, mired in depression. Note that the EZ central bank even acted more destructively, bashing a weekend economy over the head after it had already fallen to its knees. 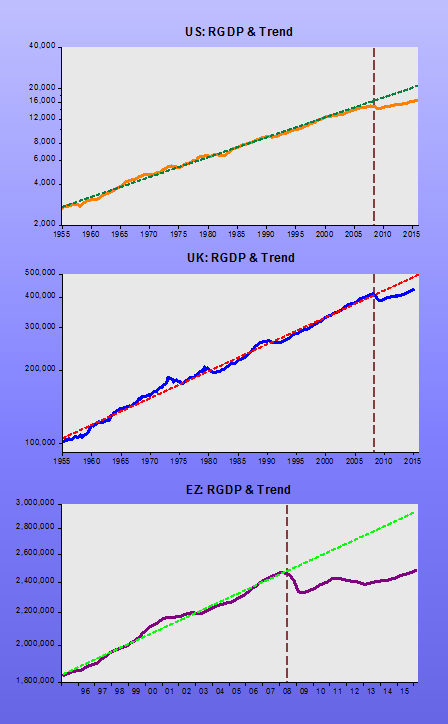