Our fellow Market Monetarists seem to be struggling a bit with making sense of the enormity of the post-Brexit market moves. It’s actually a curse sometimes being a Market Monetarist and having to take wild market moves seriously, or having to interpret them. NGDP Futures markets make sense, little else does.

Sure, the swing from 90/10 probability for Remain at 10pm on the 23rd to 0/100 certainty of Leave two hours later was pretty extreme. The huge swings in markets on the news could be seen as the “pure” reaction to the news, but then again what were markets actually pricing from one moment to the next. All sorts of stuff.

The Brexit issue has been hanging around the UK, Europe and the world for many, many years. The future of the EU and the Euro Area, likewise. It is tangled up with geo-politics: the Russia question, the breakdown of the Middle East, relations with Turkey. Is the EU a superpower? Is it the EU vs the US. Is it the G7 vs the RoW? Brexit throws all these things up in the air, and thousands more. Ask any International Relations undergrad.

One part of the jigsaw is Euro Area monetary policy. Scott Sumner today tries to make sense of all the market movements and says, without irony:

“the rest of Europe needs to take this very seriously.  Right now, almost no plausible amount of monetary stimulus from the ECB would be excessive.  It’s pedal to the metal time.”

Of course the rest of Europe needs to take this very seriously, very seriously indeed. Does he suppose it isn’t? There are lots of issues to consider, thousands, in fact. Sure the EU and the ECB are dysfunctional, but tell us something new. Is it more or less dysfunctional than the US at the moment? Maybe, maybe not.

Sumner appears to have slightly lost the plot when he talks of monetary stimulus. There are some facts out there already. The ECB is undertaking huge monetary stimulus already if he means QE or negative rates. Currently, the Euro Area is seeing 40%+ YoY Base Money growth. The ECB is committed to its current and recently expanded programme for at least 18 months. Target interest rates are solidly below zero.

What Sumner may mean is changing the targets, rather than ever bigger tools. If he does mean that, then he should say it. We have been arguing here for months that the ECB should either raise its inflation ceiling or far better, switch to NGDP level targeting.

Strangely, things aren’t too bad on the NGDP growth as we have documented.  As the chart indicates, as the US began tightening monetary policy in mid-2014 through the “rate hike talk”, we see US NGDP growth trending down. The opposite is observed in the EZ countries. 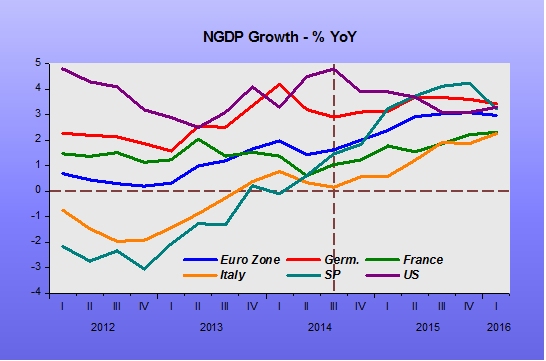 The stimulus is working slowly, but could work so much better if the targets were changed.

3 thoughts on “Speaking up for the Euro Area”