“I have a sense that the recovery is slow but it is not in great danger, at least no more than usual,” Mr Blanchard says. “We can talk about risks, they are always there. But the notion that around the corner there is a catastrophe waiting — that really strikes me as totally off.

“For the last seven years we have been thinking about the legacies of the crisis and all the things that have pulled the economy back. I think they are becoming less important,” Mr Blanchard argues, adding: “And so the question is why is it, that with no fiscal consolidation and banks in decent shape, at least in terms of lending, and zero interest rates, we don’t have an enormous demand boom? That is now the puzzle.”

The answer, he suspects, lies in a concern about the future that has led consumers to curb their spending and companies to decrease investment. “I think it is now much more weakness due to the expected future rather than the past,” he says.

That, says Mr Posen, ought to be depressing. But the reality is that the world has also for the first time in a long while found “a sustainable rate of growth”.

Mr Blanchard thinks the biggest risk for the US economy may be that markets are misreading the data and being too gloomy instead of recognising that the recovery is “one of the most balanced … we have had in a long time”.

And to top it off:

Yet in the end, he argues: “You could avoid some of this mess … by just switching to expansionary fiscal policy.”

They should have a better reading of history.

The world even managed to recover from the Great Depression (for the US it happened before it got into WWII). Why not from a much “milder” one? 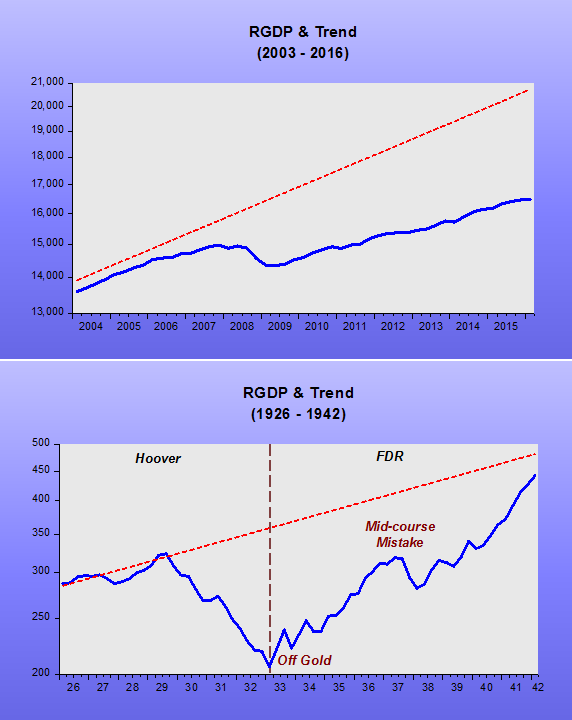 And calling this “recovery” as “one of the most balanced” borders on criminal!

One thought on “Where do “beliefs” come from?”