As James Alexander wrote in the previous post, according to the London Times:

The Bank of England has cut its growth forecasts and signalled that interest rates may rise earlier than expected.

Higher savings levels as families grapple with their debts and weaker productivity than the Bank was projecting three months ago weighed on the outlook for the economy, also hitting jobs.

However, the Bank said inflation would overshoot its 2 per cent target within two years, putting an early interest rate rise on the table.

The MPC must be “MWI” (that´s “meeting while intoxicated”) because the story told by the following pictures is a very sad one!

After more than 15 years of great nominal stability (only more recent period shown), the BoE, like the majority of central banks, thought that nominal spending (NGDP) had to be “jerked down”.

For the past two years it has been trying to “jerk-it-down” even more.

And what about inflation? After a spell at zero it is just positive, but the “farsighted jerks” think that in two years’ time it will likely be “2.1%” and so “we have to act shortly”! 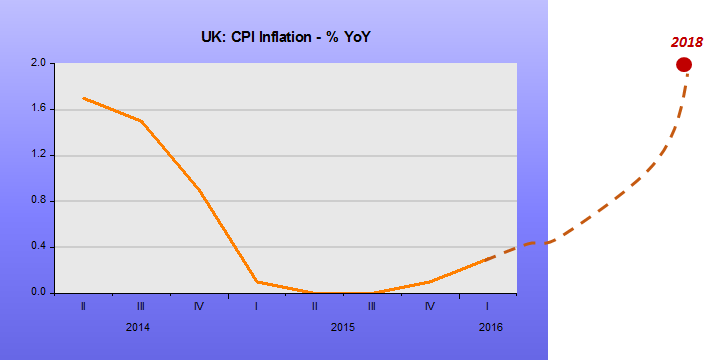 2 thoughts on ““Playing the fiddle while Rome Burns””