The Bank of England appears to have learned nothing at all about the 2008 Great Recession. They are on the verge of making the exact same mistakes as Meryvn King and many other central bank chiefs made in that fateful year. Carney is fretting about headline inflation and other matters while watching NGDP expectations drag down RGDP into a recession.

“Rate rise back in the cards as Bank cuts forecasts” warns the headline attached to Philip Aldrick’s lead article in the Business section in The (London) Times today after yesterday’s press conference with Governor Carney at the BoE.

We have finally come to this, 2008 redux. The real economy is slowing, perhaps teetering on a recession. Yet a modest uptick in projected inflation two years out leads the Governor of the Bank of England to passively tighten monetary policy with threats to actively tighten.

The famous fan charts from the BoE show a tiny shift of the centre point in 2018 above 2%. It leads to a furrowing of Carney’s brows and leads him to give dark warnings about having to raise rates. Sterling even rose at first versus the USD despite all the Brexit fears and recession fears pushing it lower. 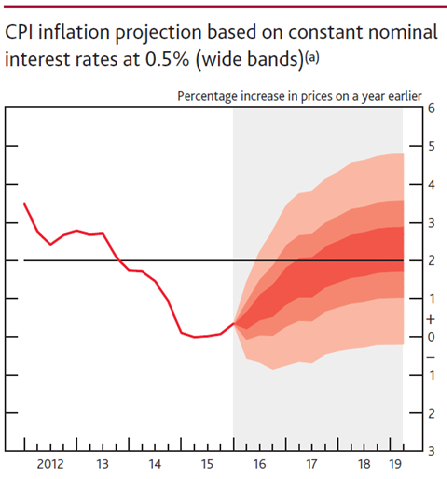 Yet the same set of data has fan charts for RGDP that show growth dropping below even the poor levels of recent years. 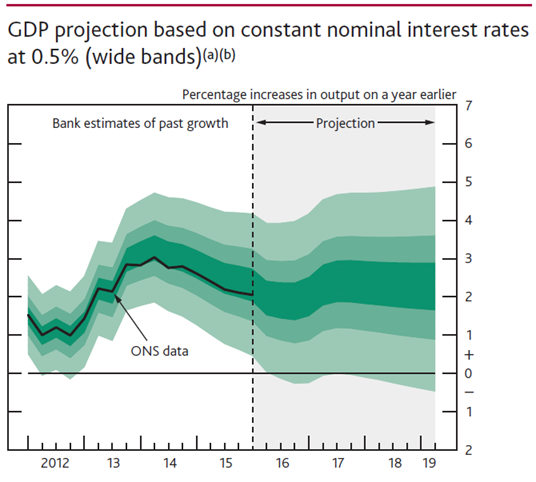 Never was there more need of a switch to NGDP targeting that allows flexibility of inflation targeting to be combined with what is going on in the real economy. Sure, the BoE can’t raise RGDP growth in the long run as they can’t directly impact productivity but they can prevent recessions – and thus lost real output and in the long run lead to higher levels of RGDP than if there were recessions.

And there certainly will be no price stability if we have a recession. Inflation is bound to slow dramatically. Two wrongs (deflation and recession), no right.