In “Explaining the last 10 years”, Simon Wren-Lewis starts off:

The Great Recession was larger than any previous post WWII recession. But that is not what it will be mainly remembered for. Unlike previous recessions, it appears to have led to, or coincided with, a permanent reduction in the productive potential of the economy relative to previous trends.

According to measures of potential output put out by the CBO, the coincidence is clear, with a marked kink in the level of potential output occurring concomitant with the “Great Recession”. If that´s true, as the chart shows the economy has essentially closed the “gap”.

However, according to a deterministic trend, estimated from 1955 to 1997 and projected forward, the “gap” has been rising given that real output growth, after dropping hard during the “GR” has never “bothered” to grow sufficiently to close the “gap”. 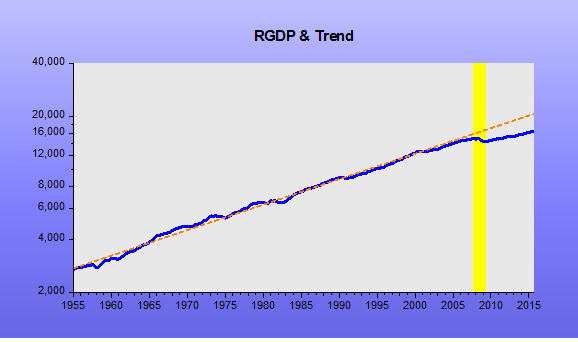 The first case indicates that the apostles of the “Great Stagnation” thesis have a point. The second view says that the economy is, in the words of Brad Delong from almost 2 years ago, in a “Greater Depression”:

First it was the 2007 financial crisis. Then it became the 2008 financial crisis. Next it was the downturn of 2008-2009. Finally, in mid-2009, it was dubbed the “Great Recession.” And, with the business cycle’s shift onto an upward trajectory in late 2009, the world breathed a collective a sigh of relief. We would not, it was believed, have to move on to the next label, which would inevitably contain the dreaded D-word.

But the sense of relief was premature. Contrary to the claims of politicians and their senior aides that the “summer of recovery” had arrived, the United States did not experience a V-shaped pattern of economic revival, as it did after the recessions of the late 1970s and early 1980s. And the US economy remained far below its previous growth trend.

A year and a half ago, those who expected a return by 2017 to the path of potential output – whatever that would be – estimated that the Great Recession would ultimately cost the North Atlantic economy about 80% of one year’s GDP, or $13 trillion, in lost production. If such a five-year recovery began now – a highly optimistic scenario – it would mean losses of about $20 trillion. If, as seems more likely, the economy performs over the next five years as it has for the last two, then takes another five years to recover, a massive $35 trillion worth of wealth would be lost.

When do we admit that it is time to call what is happening by its true name?

Simon Wren Lewis goes on to indicate that:

If we stick to the more plausible idea that this is all somehow the result of the financial crisis and recession, we can again split explanations into two types: those that focus on the financial crisis and argue that crises of this type (rather than other types of recession) impact on potential output, and those that look at the impact of the recession itself. The distinction is important in understanding the impact of austerity. If the length and depth of the recession has permanently hit potential output, as Fatas and Summers suggest, then the cost of austerity is much greater than we could have imagined.

But I believe that´s the wrong focus. The charts show that the economy was “suffocated” not by austerity, but from a highly inadequate monetary policy, as indicated by the behavior of aggregate spending or NGDP.

And that wrong-headed monetary policy remains in place today!

One thought on “What does and does not make sense?”