Almost alone among economic commentators we do actually look at Nominal GDP data as it is released. Full Euro Area NGDP data for third quarter 2015 was released this week alongside the 2nd estimate of Real GDP.

We have already posted here and here on the good news as three of the “big 4” Euro Area countries, making up 75% of the Euro Area economy, had seen accelerating NGDP. The not so good news is that the little countries saw less acceleration; in fact, it looks as though they saw slower growth. It is a bit hard to be exactly precise as the Irish GDP data, both nominal and real does not appear to conform to Eurostat norms. Ireland appears to have been growing NGDP at between 5% and 10% for a couple of years now. 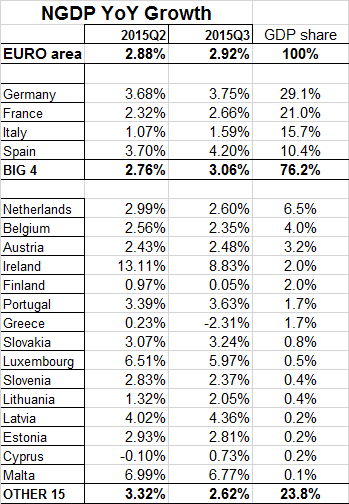 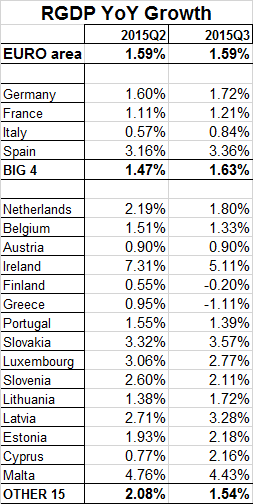 The result is that Euro Area NGDP, according to the first estimate for this figure, is still picking up but 3Q in total showed growth flattening. It is still below the average growth rate for the last twenty years, a period including the last disastrous seven years. RGDP is growing marginally above this trend. 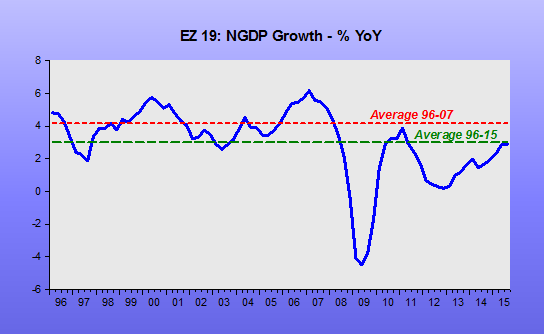 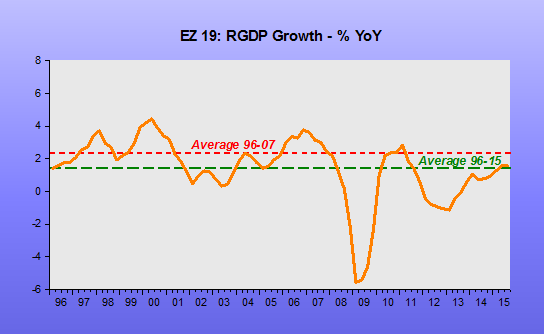 The question of trends is important. If we took the trend from 1996 to 2007 then the current Euro Area NGDP and RGDP growth rates looks awful. What should be unquestionable is the dangers of too low NGDP growth, the only unanimous conclusion of fifty years of macroeconomics. Low or negative NGDP growth causes unemployment and welfare loss – as we are seeing now occurring in Switzerland and have seen in many monetary areas since 2007.

What is too low NGDP growth? Perhaps around 2% given long-run productivity growth of over 2%. Economies work best when they have decent flexibility to allow relatively declining economic sectors the ability to decline gently via declining real returns. And economies work very poorly when there is there is an ever-present threat of negative NGDP growth. It is very hard to see what is wrong with at least a 4% NGDP level target. Prosperity must be a more important goal than inflation.

Have we spotted the reason for stiffening German opposition to more QE?

Another way of understanding the dynamics of the Euro Area and its monetary policy is to look at the performance of Germany, 29% of total GDP, and the most nationalistic and selfish country within the Area when it comes to monetary policy. We have seen time and again that what Germany considers right for itself it considers right for the entire Area. Maybe they are right not to care as they are now nearly 30% of the total. But here we see the essence of the current problem: narrow and often wrong-headed national interest. The Centre for European Reform has proposed an interesting reform of ECB governance to deal with just this issue via a removal of national central bank influence on the board. 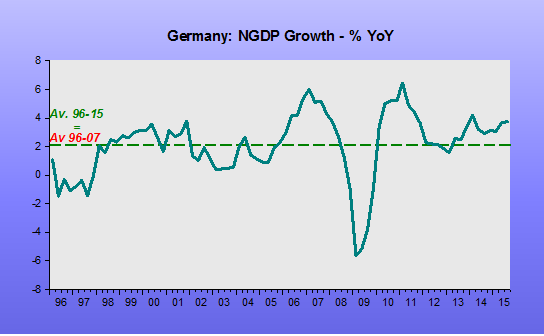 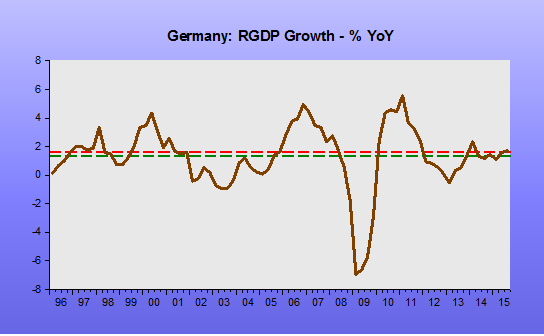 German NGDP is growing above trend again, as is its RGDP. Twice Germany was growing so fast it authorised and encouraged the “inflation-nutter” Trichet to his satisfy his mania and crash the Euro Area economy. There are clear signs the Germans are ratcheting up this pressure again.

Fortunately, Draghi is no inflation-nutter. However, he is still trapping himself with the insanely restrictive “close to, but below, 2%” non-flexible inflation target or ceiling. One that only huge amounts of QE can even partially offset.

The natural, normal, “good Europeans”, thing for Germany to do would be to enjoy faster nominal growth than other Euro member states and gradually see itself become less competitive and gradually fall back to relatively less strong growth for a while. Surely, this relative decline would be more in Germany’s longer-run self-interest, rather than crashing the Euro Area economy as a whole again, and probably growing more slowly than it would have done otherwise.