Ralph Nader wrote Yellen a sexist letter complaining about low interest rates and its effects on savers and got this response:

Would savers have been better off if the Federal Reserve had not acted as forcefully(!) as it did and had maintained a higher level of short-term interest rates, including rates paid to savers? I don’t believe so.

Unemployment would have risen to even higher levels, home prices would have collapsed further, even more businesses and individuals would have faced bankruptcy and foreclosure, and the stock market would not have recovered.

True, savers could have seen higher returns on their federally-insured deposits, but these returns would hardly have offset the more dramatic declines they would have experienced in the value of their homes and retirement accounts. Many of these savers would have lost their jobs or pensions (or faced increased burdens from supporting unemployed children and grandchildren).[many did lose jobs and many faced increased burdens]

If instead Nader had asked Yellen why the Fed allowed nominal spending to fall continuously from early 2006 and then crash after mid-2008, she would be dumbstruck and at pains to give a coherent answer! 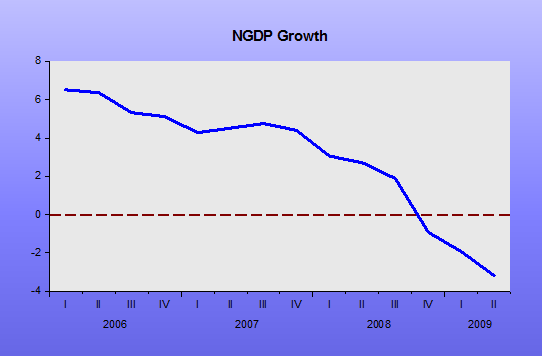