Since there´s only one meeting left, “how long” had to become “next meeting”. The parsed statement:

To support continued progress toward maximum employment and price stability, the Committee today reaffirmed its view that the current 0 to 1/4 percent target range for the federal funds rate remains appropriate. In determining [how long to maintain this] whether it will be appropriate to raise the target range at its next meeting, the Committee will assess progress–both realized and expected–toward its objectives of maximum employment and 2 percent inflation.

There´s been no material change in the statement. They just wanted to keep the “this year” option on the table. But it won´t be exercised.

Things change but they don´t budge from the view that inflation will settle near the target!

Inflation is anticipated to remain near its recent low level in the near term but the Committee expects inflation to rise gradually toward 2 percent over the medium term as the labor market improves further and the transitory effects of declines in energy and import prices dissipate. The Committee continues to monitor inflation developments closely.

The Committee also anticipates that inflation will settle, over coming quarters, at levels at or below those consistent with the Committee’s dual mandate as the effects of past energy and other commodity price increases dissipate further. However, the Committee will continue to pay close attention to the evolution of inflation and inflation expectations.

And they consistently get it wrong! 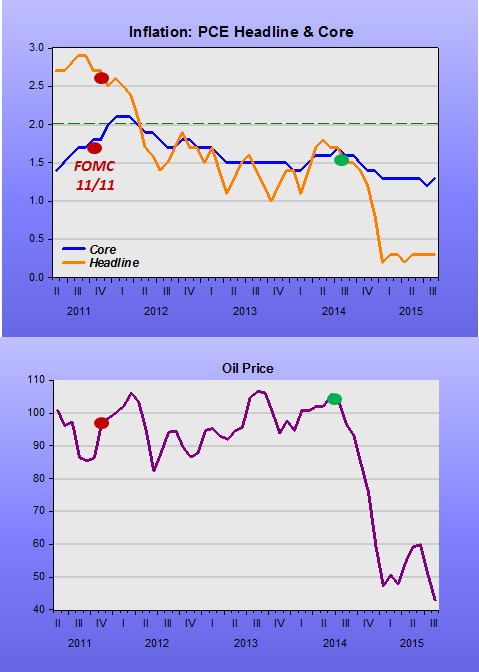 Four years ago, oil prices had climbed from $40 in mid-09 to near $100 in November 11 when the meeting took place. With oil prices stable after the steep climb, inflation did not settle near the target, it kept falling!

Now they parrot-like repeat the meme that the downward pressure on inflation of the fall in oil prices will dissipate.

It won´t, because the Fed has been tightening monetary policy for more than one year, as indicated by the NGDP monthly growth rate (from Macro Economic Advisers). That´s one of the reasons oil prices fell to begin with!

3 thoughts on “The last exit!”