Mark Carney is feeling a bit under pressure. His entry into various non-monetary policy debates such as “inclusive capitalism”, climate change, and now Brexit has stirred a few feathers, especially amongst Bank of England traditionalists. Progressives and others from the chattering classes seem to be making less fuss as he mostly seems to be one of them.

His spin doctors evidently decided that he needed to try and get back on-side with the more conservative majority in the UK and so allowed a journalist from the right-wing Daily Mail to follow him around for a day and record some of his more informal thoughts.

On the big question for the Bank of England, climate change, he was giving no quarter.

‘I was in Lima with the International Monetary Fund and G20 last week and the second most talked about issue was climate change. Is it a bad thing that the Bank of England is not only doing its job but leading the way?’ he asks. Crucially, he argues, it is not outside his remit. London is one of the world’s biggest insurance markets. Insurers are having to take account of climate change fears and risk. It is affecting their capital levels and the premiums they levy.

Unlike Scott Sumner I feel somewhat sceptical about man-made climate change. The physicists I talk to seem unsure. Who knows? Anyway, the far more revealing point to me was when he drew an analogy between climate change deniers and market-deniers.

It is a paradox. Carney is most certainly not a climate change denier. But is he a market-denier? He appears to have no interest in creating an efficient market in UK inflation futures or Nominal GDP. He denies the market a leading role, or at least doesn’t trust it when it comes to monetary policy, instead preferring the models of the PhD’s in the engine room of the Bank of England. Most mainstream economists are like this, all treating rational expectations as too random, and therefore are all more or less market-deniers. It is arrogant beyond belief, but there you have it, and it causes huge market and economic dislocations as a result.

To be somewhat fair, Carney is not like the Fed in denying the market implied US inflation rate. But this is probably because the UK implied inflation curve is frankly unbelievable because of various technical failures. 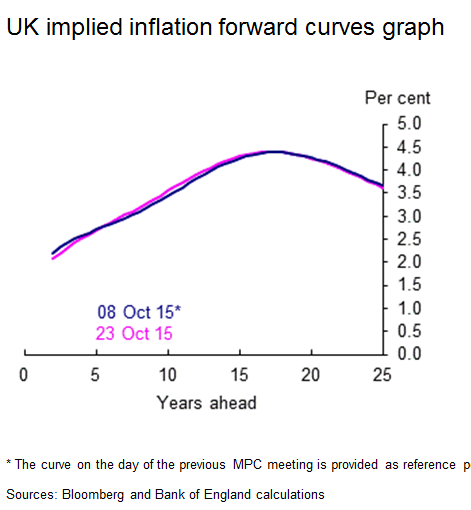 (4% implied inflation! must be something screwy, and there is, massive artificial shortage of longer dated index linked gilts)

What a mess! Come on Mark, get a grip, help sort it out and stop denying markets a proper role.

UK inflation expectations are rather unreliable as a result of these technical issues and public confusion. The BoE’s modelled inflation seems very much to underestimate medium term “inflation” versus surveys and market implied RPI numbers given in the BoE’s Inflation Reports.