Curiously, at the end of 1982 at the high point of unemployment and the low point of growth, with inflation below 6%, the lowest level reached since 1974, the Fed discussed NGDP targeting:

MORRIS. I think we need a proxy–an independent intermediate target– for nominal GNP, or the closest thing we can come to as a proxy for nominal GNP, because that’s what the name of the game is supposed to be.

During the December 1992 FOMC meeting there was a detailed discussion of NGDP targeting. An excerpt:

JORDAN. This question of when the time is going to come to change the [funds] rate–especially in an upward direction–and the criteria for doing so has been on my mind a lot, and I’m sure it has been in everybody’s thinking. This is my seventh meeting, and I thought it was time to go back and review the last year and to look at what actually has happened in terms of all kinds of economic indicators–monetary as well as economic indicators, nominal and real indicators–and Committee actions to see if I could deduce an implicit model. I read the newsletters, as I’m sure everybody does; and [unintelligible] and I don’t see it in the numbers, it’s certainly not inflation. It’s not the various money measures: Ml, M2, the base, or bank reserves. I don’t even think its real GDP. I put together a table–a big matrix of every forecast for as many quarters out as the Greenbook does it–for every meeting for the last year. What struck me was that it looked as if we were on a de facto nominal GNP target. When nominal GNP is at or above expectations, the funds rate is held stable; but when nominal GNP comes in below what has been expected, we cut the funds rate.

In closing the discussion Greenspan says:

As I read it, there is no debate within this Committee to abandon our view that a non-inflationary environment is best for this country over the longer term. Everything else, once we’ve said that, becomes technical questions. I would say in that context that on the basis of the studies, we have seen that to drive nominal GDP, let’s assume at 4-1/2 percent, in our old philosophy we would have said that [requires] a 4-1/2 percent growth in M2. In today’s analysis, we would say it’s significantly less than that. I’m basically arguing that we are really in a sense using [unintelligible] a nominal GDP goal of which the money supply relationships are technical mechanisms to achieve that.

From Bernanke´s Book as tweeted by Neil Irwin:

The FOMC had a long, serious discussion of NGDP targeting in 2011. And soundly rejected it.

Bernanke is really an inflation targeting freak! Note than in 1982 or 1992, no one said that by targeting NGDP the Fed “had suddenly decided it was willing to tolerate higher inflation, possibly for many years”. And just two months after this discussion, in January 2012, the Fed made the 2% target official policy!

Notice that in 1992, Greenspan said: “I’m basically arguing that we are really in a sense using [unintelligible] a nominal GDP goal…”

That said, I think it is worthwhile to check if Greenspan´s words were meaningful. The panel below pictures what went on in the NGDP, inflation and unemployment fronts from then to the end of his tenure.

The next panel shows how those things continued into the Bernanke/Yellen era. 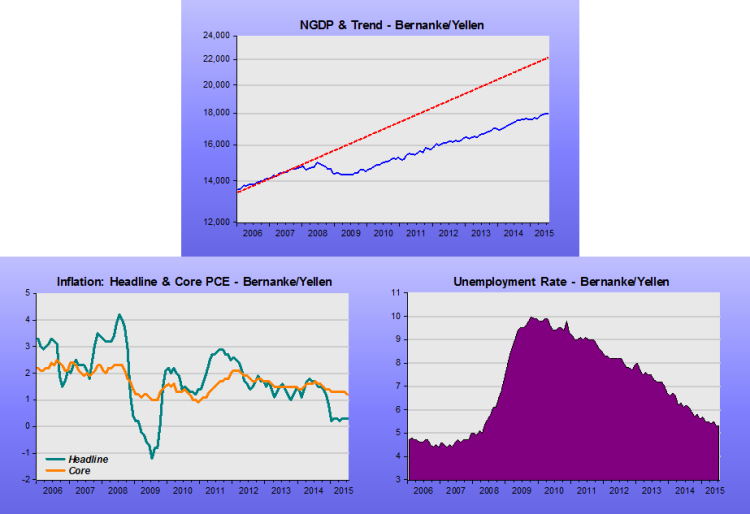 One could say: “so what”? Inflation has remained low, even below the now official target, and unemployment has come down to a “comfortable” level. Bernanke has said the “Fed saved the economy – full employment without inflation is in sight”!

But, according to Bernanke:

Congress is largely responsible for the incomplete recovery from the 2008 financial crisis, Ben S. Bernanke, the former Federal Reserve chairman, writes in a memoir published on Monday.

Mr. Bernanke, who left the Fed in January 2014 after eight years as chairman, says the Fed’s response to the crisis was bold and effective but insufficient.

“I often said that monetary policy was not a panacea — we needed Congress to do its part,” he says. “After the crisis calmed, that help was not forthcoming.”

In a few instances, Mr. Bernanke also acknowledges, the Fed could have done more. He writes that the decision not to lower rates in September 2008, immediately after the collapse of Lehman Brothers, “was certainly a mistake.” The Fed’s benchmark rate then stood at 2 percent; by the end of the year, it had been cut nearly to zero.

By “incomplete recovery”, I´ll take it he´s referring to the “gaping hole” that´s observed in the NGDP chart (the distance to the trend NGDP level). But that cannot be attributed to Congress. It refers to what Friedman said almost 50 years ago: “A second thing monetary policy can do is provide a stable background for the economy.”

Inflation is low, unemployment is back (almost) at “full employment”. So what´s missing, allowing the gap to remain wide open?

As the charts show, the unemployment rate has a different “meaning” in the two periods!

And the last chart provides a “summary statistic”.

In the 2001 recession, NGDP growth slumped, but was brought back up so that the trend level of NGDP was regained.

In the 2007-09 recession, NGDP growth “caved” and has remained far below the trend growth, implying that there has been no “recovery”, with the economy remaining “depressed”!

And that´s no fault of Congress, but the result of Bernanke´s (and the Fed´s) obsession with inflation!