Bernanke´s book Courage to Act was released today. I´m not much curious about the backstage discussion of how best to rescue the financial system or the “excitement” about Lehman because I fear that much of that was a consequence of monetary policy mistakes, so I will mostly want to read about his views on the monetary policy the Fed was pursuing.

I have the feeling he forgot about Friedman´s first and second dictum about what monetary policy can do.

When a Governor of the Board in 2002, Bem Bernanke made a speech at a conference honoring Milton Friedman on the occasion of his 90th birthday. He concludes thus:

For practical central bankers, among which I now count myself, Friedman and Schwartz’s analysis leaves many lessons. What I take from their work is the idea that monetary forces, particularly if unleashed in a destabilizing direction, can be extremely powerful. The best thing that central bankers can do for the world is to avoid such crises by providing the economy with, in Milton Friedman’s words, a “stable monetary background“–for example as reflected in low and stable inflation.

Let me end my talk by abusing slightly my status as an official representative of the Federal Reserve. I would like to say to Milton and Anna: Regarding the Great Depression. You’re right, we did it. We’re very sorry. But thanks to you, we won’t do it again.

I think Bernanke gave a too narrow interpretation of what was Friedman´s second dictum:

A second thing monetary policy can do is provide a stable background for the economy.

If instead of low and stable inflation he had pursued a stable growth path for nominal spending (NGDP) he would have avoided the crash.

And it´s not that Bernanke did not know that the level of the FF rate (“low” at the time) was not a good indicator of the stance of monetary policy. In 2003 he wrote on the Legacy of Milton and Rose Friedman:

As emphasized by Friedman (in his eleventh proposition) and by Allan Meltzer, nominal interest rates are not good indicators of the stance of policy, as a high nominal interest rate can indicate either monetary tightness or ease, depending on the state of inflation expectations. Indeed, confusing low nominal interest rates with monetary ease was the source of major problems in the 1930s, and it has perhaps been a problem in Japan in recent years as well. The real short-term interest rate, another candidate measure of policy stance, is also imperfect, because it mixes monetary and real influences, such as the rate of productivity growth…

The absence of a clear and straightforward measure of monetary ease or tightness is a major problem in practice. How can we know, for example, whether policy is “neutral” or excessively “activist”?

Ultimately, it appears, one can check to see if an economy has a stable monetary background only by looking at macroeconomic indicators such as nominal GDP growth and inflation…

Unfortunately, he preferred to concentrate on inflation, and worse, the headline variety, which was being buffeted by the oil and commodity price shocks!

In looking at this 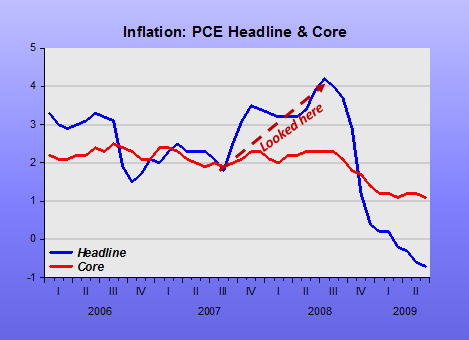