In Time Inconsistency Is Only One of Many Reasons to Favor Policy Rules John Taylor writes:

Advocates of purely discretionary monetary policy frequently list Kydland and Prescott’s time inconsistency argument as the only reason for policy rules, and then they try to shoot that down or say it is outweighed by arguments in favor of discretion.  This is the gist of Narayana Kocherlakota’s recent argument for pure discretion.

But there are a host of reasons why a monetary policy based more on rules and less on discretion is desirable, and time inconsistency is only one. I listed these seven in a Harry Johnson Lecture that I gave back when Fed policy was more rules-based:

This list still applies today and it does not even include a key technical reason (call it number (8)) that I still stress to my Ph.D. students: The Lucas econometric policy evaluation critique implies that in a forward-looking world policy rules are needed simply to evaluate monetary policy

Understandably, John Taylor is an unconditional fan of his namesake rule. Interestingly Yellen says that the Fed shouldn´t “be chained to any rule whatsoever”. Why? Because monetary policy requires “sound judgment”? And rules won´t provide that?

Maybe that´s a problem associated with “instrument rules” like Taylor-type rules, which give out the “desired” setting for the interest rate instrument (the FF target rate in the case of the US). What if the central bank, instead of an “instrument rule” adopted a “target rule”?  For concreteness, let´s assume the Fed had adopted (maybe implicitly) a NGDP level target as it´s rule for monetary policy.

The charts compare and contrast the interest rate “policy rule” and the NGDP level target rule (where the “target (trend) level” is the “Great Moderation” (1987-05) trend). In this comparison, the actual setting of the Federal Funds (FF) rate is “right or wrong” depending on, not if it agrees with the setting “suggested” by the instrument rule, but if it is the rate that keeps NGDP close to the target path; and in case there is a deviation from the path, if the (re)setting drives NGDP back to the target.

For the “instrument rule”, I use the Mankiw version of the Taylor rule. The Mankiw version is simpler because it doesn´t require the estimation of an output gap and doesn´t state an inflation target rate (which the Fed didn´t have any way until January 2012).

The first chart shows John Taylor´s chart from his original 1993 paper. Note that it is qualitative (even if not exactly quantitative) similar to the “policy rule” obtained with the Mankiw rule.

During this period (1987 – 1992) monetary policy was “quite good”, in the sense of keeping NGDP close to the “target path”. Actually, when the Fed reduced the FF rate at the time of the stock market crash, it turned monetary policy a bit too expansionary, given NGDP went a bit above trend. 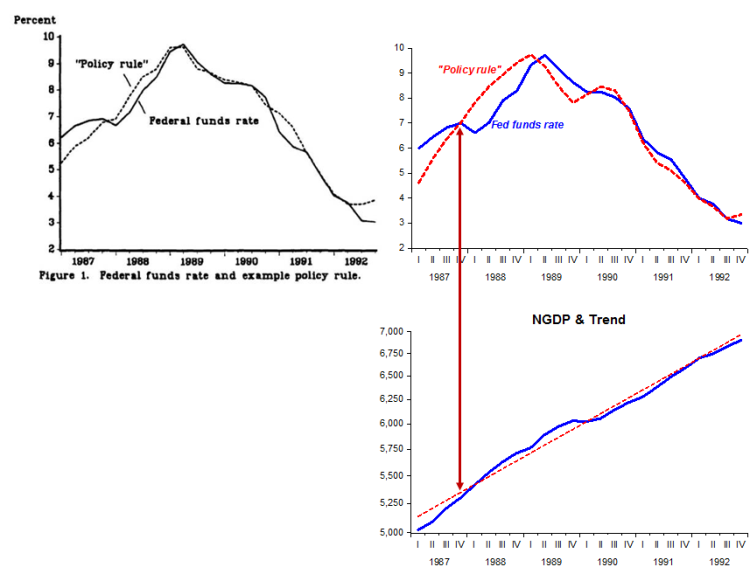 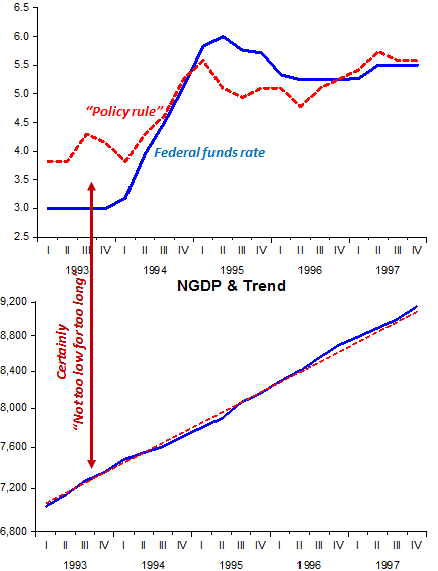 All through those years, NGDP remained very close to the “target path”, although the FF rate at times differed significantly from the “policy rule”.

What the chart tells us, however, is very different. The FF rate was too low in 1998 – 99. At this time, the Fed reacted to the Russia crisis (and the LTCM affair). Monetary policy loosened up at the same time that the economy was being buffeted by a positive productivity shock.

The monetary tightening that followed was a bit too strong because NGDP dropped below trend. The downward adjustment of the FF rate was correct in the sense that it stopped NGDP from falling lower, and by mid-2002 it began to recover. I wonder how much more grief the economy would have been subjected to if the “policy rule” had been followed. 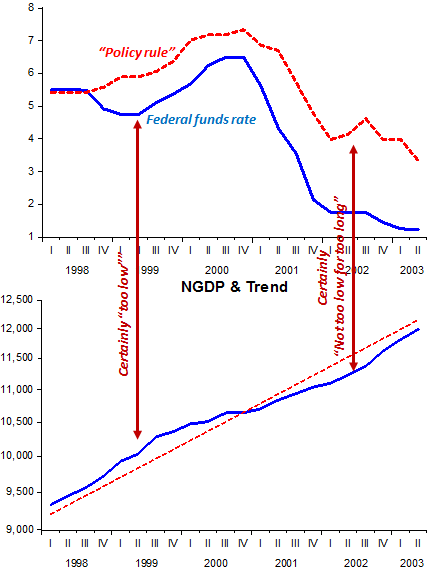 The 2003.III – 2005 period is the second half of Taylor´s “too low for too long”. In the FOMC meeting of August 2003, the Fed adopted “forward guidance” (FG) (first it was “rates will remain low for a considerable period” followed by “will be patient to reduce accommodation, and finally “rates will rise at a measured pace”).  The fact is that FG helped push NGDP back to trend. Maybe the “pace was too measured”, but the fact is that by the time he handed the Fed to Bernanke, NGDP was square back on trend.

If the “policy rule” had been closely adhered to, the “Great Recession” would likely have happened sooner!

The FF rate remained at the high level it had reached at the end of the “measured pace story”. At the end of 2006, aggregate demand (NGDP) began to deviate, at first slowly, below the trend level. The FF rate remained put (notice that although too high, the “rule rate” changed direction). The FOMC was not comfortable with the “elevated” price of oil and kept hammering on the risks of inflation expectations becoming un-anchored (see the late 2007-08 FOMC transcripts).

Despite the reduction in the FF rate, monetary policy was being tightened! And the “Great Recession” was invited in! Maybe there would have been a “Second Great Depression” if the “policy rate” had been followed closely.

Moral of the story. Yellen and the Fed do not have “infinite degrees of freedom”, hidden under the umbrella of “sound judgment”. They would do well to set a “target rule”.

PS Japan just improved on its 2% IT rule:

Japanese Prime Minister Shinzo Abe will announce a plan on Thursday to raise gross domestic product by around 22 percent to 600 trillion Japanese yen ($5 trillion) as he refocuses on the economy after the passage of controversial security bills that eroded his popularity.

2 thoughts on “The “Rules debate” once again”