Here’s How Quickly Yellen Wants to Raise Interest Rates, According to a Former Fed Policy Maker:

In what’s become known as the “dot plot,” Fed officials earlier this month showed the public their best estimates for where the central bank’s policy rate will be over the next few years. It’s valuable information for investors who are desperate to know how quickly borrowing costs will rise in the U.S. What makes things tricky is that these dots are anonymous, and no one’s views matter more than the chair’s.

Enter Meyer, who was a Fed governor from  1996 to 2002 and is now senior managing director at Macroeconomic Advisers. He’s taken a stab at guessing which dots belong to whom (scroll down for the chart). He estimates that Yellen in June foresaw a single rate hike this year. That would make her dot one of five at 0.375 percent, which is below the median of her fellow Federal Open Market Committee participants.

Meyer also expects her to change her view by September, by which point he expects to see an economy on stabler footing. 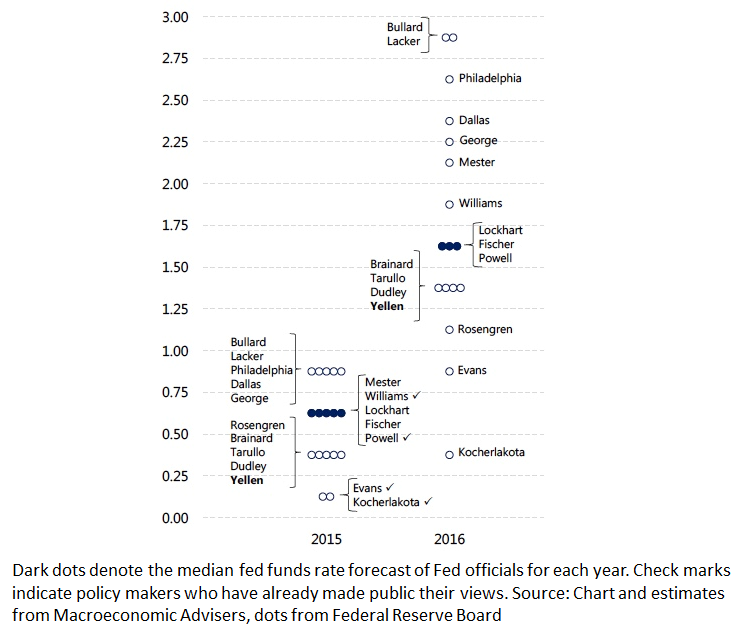 In Does the Fed finally realize forward guidance is folly? Caroline Baum thinks this is a waste of time:

In the last two weeks, three Federal Reserve officials have said or implied that the first rate increase could take place in September. The reaction? The September federal funds futures FFU5, +0.01%   set a new contract high of 99.83, an implied yield of 0.17%.

Just imagine what Fed officials must be thinking…

Fed Chairman Janet Yellen: “What part of September don’t they understand? In the old days, the Fed said almost nothing, or leaked it to The Wall Street Journal. Fed watchers had to deduce our stance from open-market operations. Yet traders were quick to tell their underlings: Don’t fight the Fed. Now we basically tell everyone what we are going to do and when, and the response is: So what?”

Fed Vice Chairman Stanley Fischer: “Perhaps it’s because we keep moving the goal posts. Sometimes we use a date for guidance. Other times it’s a threshold. Once our thresholds are breached, we have to hide behind a mish-mash of indefinite words, such as “considerable time” or “patient.” What exactly does that mean?”

Yellen: I think it’s very clear what we mean.

Fischer: Yes, it’s clear that we don’t know when we are going to raise rates, by how much and at what intervals. That’s what is clear. How could we be expected to know that given the nature of a rapidly changing global economy? As I said before I joined the Fed, and refrained from public comments to that effect since: ‘You can’t expect the Fed to spell out what it’s going to do. Why? Because it doesn’t know.’”

If policy makers want to understand why markets are ignoring the likelihood of an imminent increase in interest rates, look to the ever-changing nature of the guidance. Say what you mean, mean what you say, and realize that some things are best left unsaid.