Everybody and the Pope is waiting for the end of the FOMC meeting on Thursday, particularly if it will signal the time of the “feared lift-off”.

The trouble is that the Fed thinks that for the past six years it has followed an “easy” or “accommodative” monetary policy by keeping interest rates on the “floor”!

The opposite, however, is true. Monetary policy has remained tight, or even very tight, throughout this time.

Even so, the price level remains far below what it should be if the 2% target had been pursued during the recovery and the level of spending remains far below the level that would have materialized if the Fed had “cranked” a 5.5% nominal spending growth (the “Great Moderation” NGDP growth rate) after NGDP tanked in 2008.

Not surprisingly, both medium and long-term inflation expectations have recoiled during the recovery. 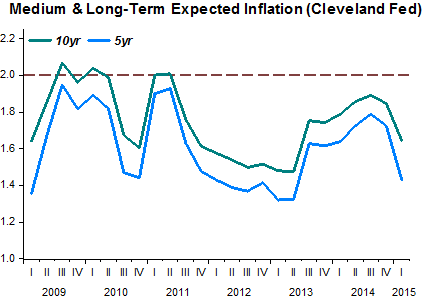 And all this naturally follows the very low rate of broad (Divisia M4) money growth observed during the so called recovery!

By concentrating attention on interest rates and showing “eagerness” to get them up, the Fed will instead throw the economy to the ground!

5 thoughts on “When will the Fed recognize its failures?”