One more thing: Brad says that we came into the crisis expecting business cycles and possible liquidity-trap phases to be short. What do you mean we, white man? Again, we had the example of Japan — and even aside from Rheinhart-Rogoff, it was obvious that Postmodern business cycles were different, with prolonged jobless recoveries.

In the end, while the post-2008 slump has gone on much longer than even I expected (thanks in part to terrible fiscal policy), and the downward stickiness of wages and prices has been more marked than I imagined, overall the model those of us who paid attention to Japan deployed has done pretty well — and it’s kind of shocking how few of those who got everything wrong are willing to learn from their failure and our success.

He should have read my answer to him 4 years ago – THERE´S NOTHING “POSTMODERN” ABOUT THIS RECESSION, IT´S A FED ENGINEERED DEPRESSION” –  where I conclude:

By calling this a “postmodern” recession, Krugman is likely saying that the only way-out is through fiscal policy. But that has been tried (according to Krugman the dosage was not big enough) and the collateral effects have been pretty damning.

What all this discussion does is to allow the Fed to stay on the sidelines. After all, it had not much to do with anything that´s been happening. It´s “Postmodern”!

(Note: Postmodernism is a philosophical movement… it holds realities to be plural and relative, and dependent on who the interested parties are and what their interests consist of.)

Let´s put up some images. The first set shows that the both the intensity of the drop in employment and the speed of increase are associated with what happens to aggregate nominal spending (NGDP), something the Fed closely controls, irrespective of where the interest rate happens to be. 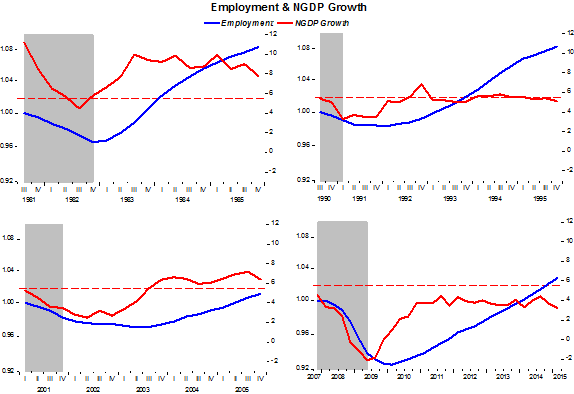 Note that things are much more subdued after the Volcker adjustment phase (1981-85). What follows is the “Great Moderation”, when NGDP grows at around 5.5% along a stable level trend.

For example, after the 2001 recession, which was quite shallow in terms of RGDP growth (never becaming negative), NGDP growth lingers for some time below the 5.5% rate of growth. Therefore, employment behavior looks like the base of a wide (shallow) bowl (“jobless recovery”)

The present cycle is another animal altogether. The Fed never had its heart in pulling nominal spending up to a reasonable level, keeping its growth stable at “slow speed”. Employment takes a deep dive and comes back at a speed consistent with the low spending growth.

The next set shows the behavior of inflation over the same periods. The pattern is easy to see. The Volcker adjustment is successful in bringing inflation down. Later, Greenspan places it on (or close to) the 2% “target”, mostly by keeping spending growth close to the trend level path. Then, Bernanke comes along and apparently decides that´s “way too high”. To keep inflation “lower than low” the Fed pulls the hand brake to slowdown nominal spending growth. 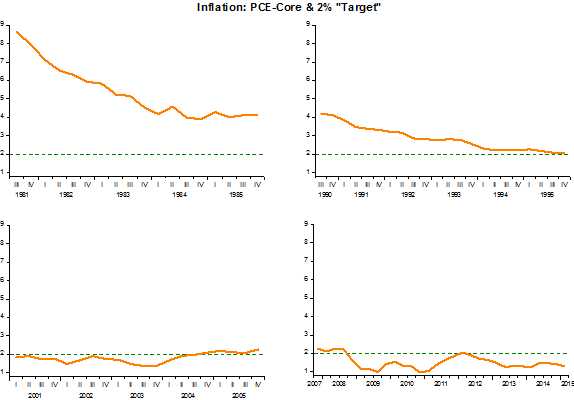 The last set illustrates nominal and real growth over the episodes. When you look at the bottom right image, you get the hang of why thinks are so glum. 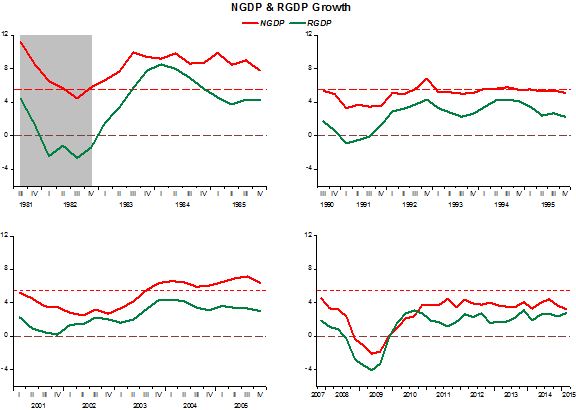 The “novelty” of the situation depicted in the bottom right image of all the charts is what explains why people’s expectations of the length of the what Krugman calls the “liquidity-trap” phase were “miles off”, and why DeLong says “backward induction unraveled”.