In “The U.S. Economy Just Had Its Worst Month Since the Recession”, the WSJ reports on Macroeconomic Advisers explanation, or better “hand waving”, of “potholes” in the way of the economic recovery:

Macroeconomic Advisers on Thursday said its monthly estimate showed GDP fell an inflation-adjusted 1% in March, the largest drop since December 2008, “when the U.S. economy was in the throes of recession,” the firm said. Monthly GDP had climbed 0.3% in February and ticked up 0.1% in January after falling 0.4% in December, the firm said (and shows a version of this chart). 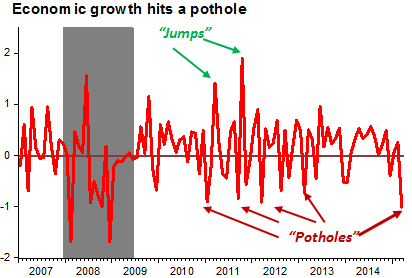 The key reason not to worry too much: The contraction reflected a drop in net exports related to the resolution of a labor dispute at West Coast ports, the firm said.

“Because the decline in monthly GDP was driven by a surge in imports that was probably unrelated to current production, we are suspicious of it and believe it overstates the underlying weakness in the economy,” Macroeconomic Advisers said in a note to clients.

Note on the chart above the presence of multiple “potholes” of similar size. I bet that for each there was a convenient “explanation”. I don´t recall their “explanation” for the “jumps”, but maybe it went along the lines “the economy has finally found its ‘foothold’”.

But when you go beyond the noisy high frequency data, and look at accumulated growth which gives a better feeling for the underlying trend, what you see is the picture of a “brain at rest”, and that´s because of the “low level stable stimulus” being provided by nominal spending (NGDP) growth!