Every time the dollar makes “Strong” moves, up or down, there are “lamentations” and “concerns”. Take, for example, this post from 2011 “The myth of the strong dollar”, where I discussed the “debate” that was generated by a David Malpass piece in the WSJ “Weak Dollar, Weak Economy”:

The combination of super-low interest rates and trillions in leveraged Federal Reserve debt constitutes a semi-official weak-dollar policy. It has driven gold to a record high and made the dollar one of the world’s weakest currencies. The dollar index has fallen 38% since 2002 (to 75 from 120) despite cynical statements by officials that a “strong dollar is in our national interest.” To protect themselves from the weakening dollar, investors and corporations are shifting growth capital from U.S. businesses into foreign infrastructure and jobs, a process that is dismantling decades of U.S. wealth creation.

The last figure “proves” the myth of the “strong” dollar. It shows the real trade weighted exchange rate of the major currencies against the dollar. At present, in real terms, the dollar trades at levels that correspond to the minimum over the floating exchange rate history. Anybody cares to take a guess of its future direction? Will it turn up in “typical” cyclical fashion or will it brake through its “historic” floor? 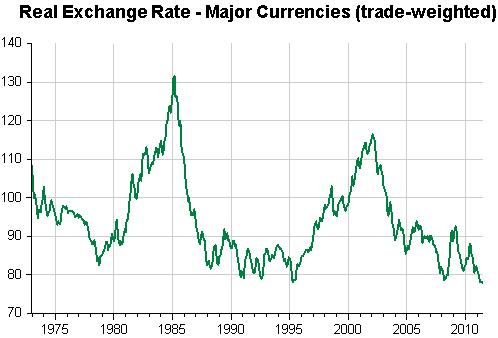 Fast forward almost four years and the dollar is being “debated” again. The NYT did a “foursome” with Desmond Lachman, Jeffrey Frankel, Scott Sumner and Erin Nakamura:

Among the more striking international economic developments over the past six months has been the 15 percent appreciation of the U.S. dollar. U.S. policymakers would be ignoring this development at their peril.

Any movement in the exchange rate has pros and cons. When the dollar appreciates as much as it has over the last year, the obvious disadvantage is that the loss in competitiveness by U.S. producers hits exports and the trade balance. But if the dollar had fallen by a similar amount, there would be lamentations over the debasing of the currency.

In the past few months, the euro has fallen from roughly $1.35 to $1.08, triggering concern that the dollar is becoming overvalued. Some economists have suggested that the Fed should ease monetary policy by printing money or holding down interest rates, in order to weaken the dollar in the foreign exchange markets.

The chart shows what transpired in the intervening period. The dollar turned back in “typical” cyclical fashion. It may still climb, but the real question is: So what?