I was very interested by the new paper by Claeys and Walsh on “plucking” as an explanation of differential performance in Europe; basically, they’re saying that fast growth has come in countries that previously had deep slumps. But how does that result interact with the result many of us have found, which is that differences in austerity seem to explain a lot?

Maybe the point is that there aren’t any deep mysteries that need explaining. You can point to individual countries and say that they did better than you might have expected, but any kind of non-cherry-picked analysis of the data really, really wants to tell you not just that austerity hurts growth but that it’s the major factor causing some European countries to do worse than others.

That´s the correct conclusion when comparing countries that do not have an independent monetary policy.

But what happens when you compare with countries that do have control of their monetary policy? Does austerity still stand out?

The charts compare Spain (no monetary policy) with Poland (own monetary policy). Curiously, austerity (measured by the reduction in the structural balance) was even stronger in Poland. Nevertheless, the Polish economy has done much better in terms of real output growth.

The next charts show that monetary policy is much tighter in Spain, dependent on the ECB, than in Poland, with its own central bank! 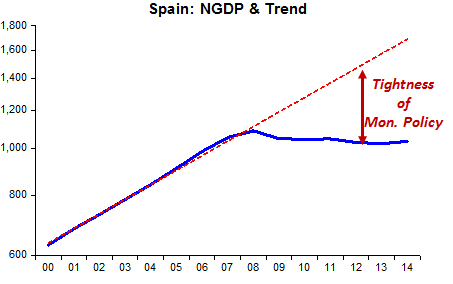 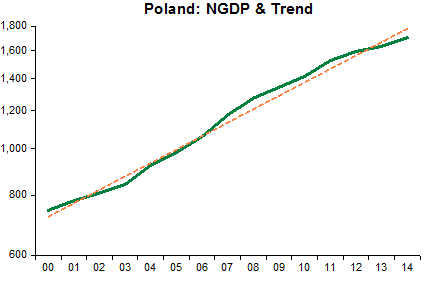 Update: In “Eurozone Counterfactual” David Beckworth has a detailed take:

So once again, the evidence points to something unique to the Eurozone that affects both the economy and  fiscal policy. The Eurozone’s tight monetary policy over this period fits the billing.
It is reasonable to conclude, then, that had the ECB had not raised its interest rate target in 2008 and 2011, but lowered it and had it started its open-ended QE program back in 2009 there would now be a much brighter future for the Eurozone. Instead, we now face the prospect of a Grexit for which the ECB has only itself to blame.