Stanley Fischer, at the time (August 2012) head of the Bank of Israel, was very concerned with the “fiscal situation”. In his mind he was likely thinking how the BoI would offset the expansionary (inflationary) stance of fiscal policy.

If so, I would like to describe briefly the current state of the Israeli economy and also refer to the measures that the Government is taking at the present time to maintain that situation. The economy is growing at a reasonable rate of 3 percent per year—slower than in the past few years but still faster than growth in the West. The unemployment rate is relatively low, inflation is low, and the exchange rate is positioned where it’s good for exports. The current account of the balance of payments will probably show a small deficit this year. The main attention today focuses on the budget measures that the Government has decided to take.

One approach says, “It’ll be okay.” Those who subscribe to this outlook hope that the economy will begin to grow a 5 percent rate all of a sudden and that the problems will be solved. In Europe, however, no growth is expected this year, and strong growth will not come to Israel from the U.S. or even from China or India. Therefore, we have no choice but to take care of ourselves, and it’s best to do it now while the economy is in a good situation. Therefore, the Government has resolved to strive for a 3 percent deficit next year, assuming that growth will also be around 3 percent. This is the purpose of the measures that the Government has decided to take—to bring the economy to a situation where it will be strong enough to cope with the expected difficulties next year from a position of strength and not of weakness.

Governments that face elections usually prefer to wait until after the elections to tackle problems such as these. This behavior often leads to a crisis that erupts even before the elections. The Government of Israel has decided not to behave that way. I was very critical of the Government recently, not because I got pleasure from it but because I didn’t expect the Government to take the measures that it took. We are fortunate that the Government ultimately chose to deal with the situation. I think that if all the measures that the Government announced are carried out, the Israeli economy will be strong enough to cope with almost any problem that reaches us from abroad. If the global economy avoids catastrophe, the Israeli economy will be able to continue growing—for the wellbeing of the country’s citizens, the recent immigrants, and all of us.

Coincidence or not, that marks the point in which the Israeli economy, after having weathered the crisis better than most, mainly by avoiding the large NGDP drop below trend that was characteristic of many developed economies, begins the steep slide “into the abyss”!

The two charts below illustrate

The next chart is “living proof” that falling/low interest rates do not indicate easing/easy monetary policy.

And inflation (which has remained less than half the time inside the target band) is now “kissing zero”. 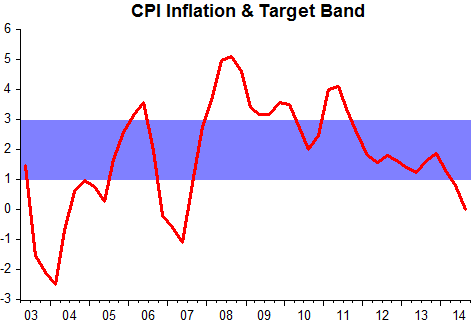 From a Market Monetarist perspective, the reason for the widening NGDP gap has an obvious monetary explanation. As the chart below shows, following Fischer´s speech money supply growth was strongly reduced while velocity was relatively stable. When velocity growth tanked (money demand went up), money supply growth was far short of what was needed to offset the rise in money demand! 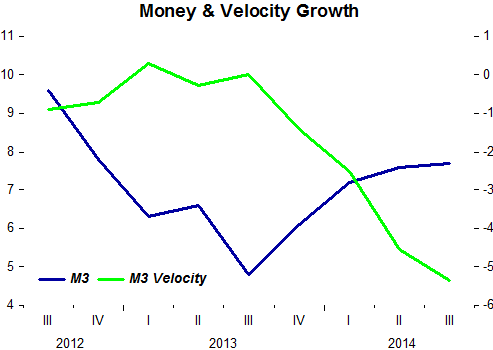