Back in 2007-08, headline inflation was high due to an adverse oil shock, but unemployment was low. Notwithstanding the fact that core inflation was “on target”, the Fed “tightened” .

Now inflation, both headline and core, are much lower than target, but unemployment is falling (maybe for the wrong reasons). Nevertheless, that´s sufficient for the Fed to again consider tightening!

The new inflation numbers alone likely won’t change views inside the Fed, but if core inflation continues to decelerate, that could be a worry.

Ms. Yellen acknowledged last week that falling energy prices will hold down headline inflation, “and may even spill over, to some extent, to core inflation.” But, she said, officials “see these developments as transitory.”

Continued strong hiring and output growth should reassure officials at the central bank that the economy can handle tighter monetary conditions, even if inflation continues to undershoot their goal.

The economy expanded at a 5% rate in the third quarter—the best gain in more than a decade—and the unemployment rate fell to 5.8% in November from 7% a year earlier.

A fall in energy prices, while dragging down overall inflation, helps consumers in the form of cheaper gasoline and supports broader economic growth.

And the “punch-line” (the usual fall-back position):

“Having to spend less on gas and energy…it’s like a tax cut that boosts their spending power,” Ms.  Yellen said. 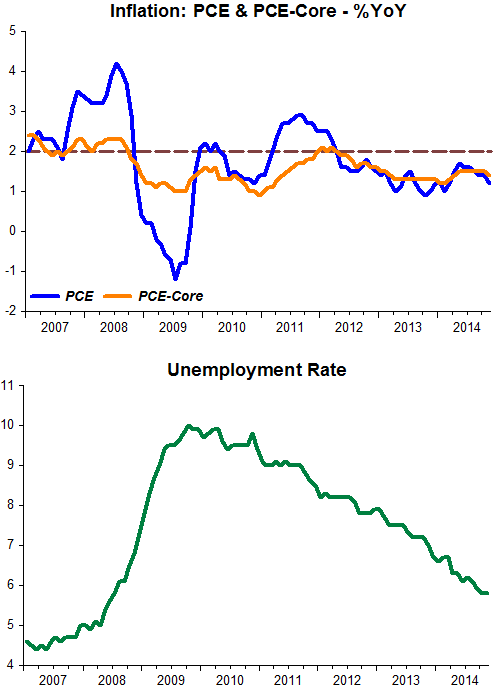 One thought on “For the Fed, just like high inflation, low inflation is sufficient reason to tighten!”