Some analysts have claimed that this speech was Draghi’s “Abenomics” moment. Nouriel Roubini argues that Draghi has outlined a similar “three arrows” approach:

But Roubini, like others, ignores the context of this speech. It is not fundamentally about restoring growth in the short term. Nor is it about the balance of monetary and fiscal policy, or about the responsibilities of core versus periphery. In fact it is not about short-run economic policy at all. It is about unemployment.

Draghi rightly notes that this is partly cyclical. He shows that the Eurozone’s labour market has actually suffered two shocks, the first being the financial crisis of 2008 and the second – and far worse – being the sovereign debt crisis of 2011 (and shows a version of the chart below) 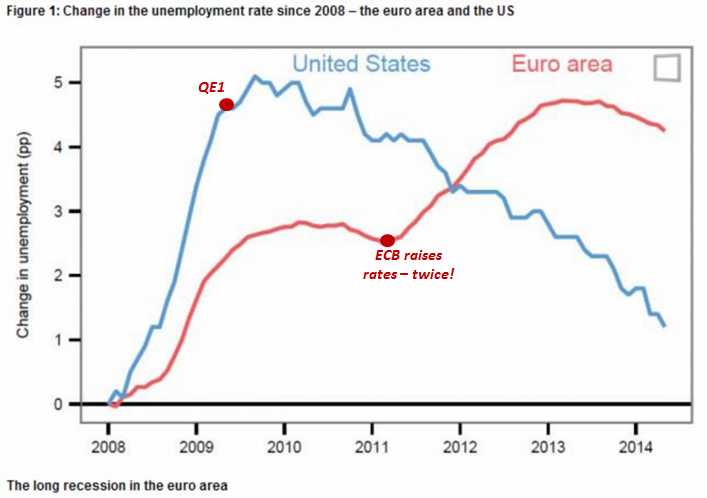 As David Beckworth has said many times, it´s not a sovereign debt crisis but a monetary (NGDP) crisis:

Thus, the ongoing rise in the debt-to-GDP ratio is not just because of the sharp fall in nominal income. It is because monetary policy has not allowed nominal income to grow fast enough to restore it to expected levels where the debt burden is more manageable. This in turn, has caused Eurozone debt burden to take off with no end in sight.

The charts below are consistent with the differing behavior of unemployment in the US and Eurozone. In 2011 the ECB, headed by Trichet thought it appropriate to raise interest rates, not once but twice! 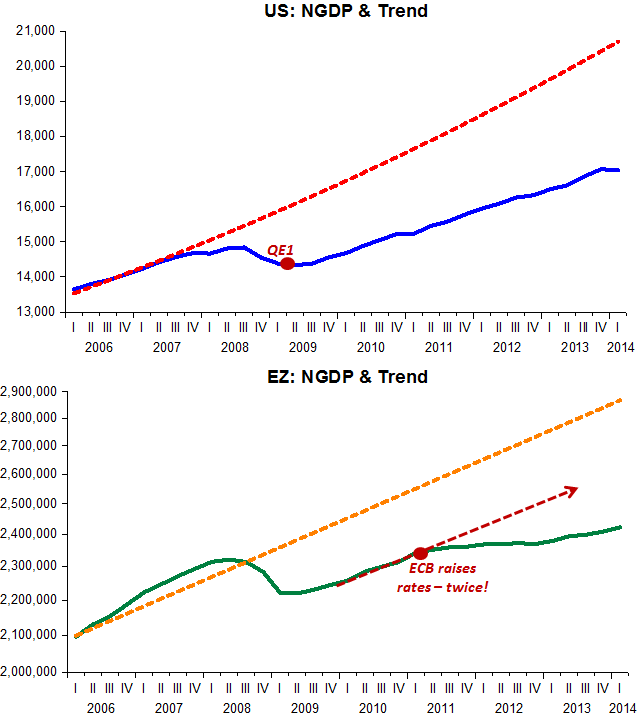 Yes, for good or bad, monetary policy is pretty powerful!

Notes: Three years ago both I and David Glasner did related posts to the topic at hand.

I wasn´t very surprised to see that with little editing, a few paragraphs of Doug Irwin´s just released paper on “Gustav Cassel´s analysis of the interwar gold standard”, give a perfect description of present day events:

…Many of these problems were mutually reinforcing and helped put the world economy Eurozone economies into a death spiral, the ECB did little to address the situation. As Eichengreen showed, the gold standard euro constrained monetary policies and prevented countries from undertaking expansionary measures that could have ended the severe deflation recession. Politicians and central bankers clung to the “gold standard mentality” “euro mentality” which viewed the gold euro parity as an inviolable contract that had to be defended even at the cost of high unemployment (Eichengreen and Temin 2000). The belief that deflation internal devaluation was a necessary and inevitable adjustment from the preceding boom also provided an excuse to refrain from any significant policy response.

In Glasner´s “The Economic Consequences of Ms Merkel”:

…Fast forward some four score years to today’s tragic re-enactment of the deflationary dynamics that nearly destroyed European civilization in the 1930s. But what a role reversal! In 1930 it was Germany that was desperately seeking to avoid defaulting on its obligations by engaging in round after round of futile austerity measures and deflationary wage cuts, causing the collapse of one major European financial institution after another in the annus horribilisof 1931, finally (at least a year too late) forcing Britain off the gold standard in September 1931…

… Now, it is Germany, the economic powerhouse of Europe dominating the European Central Bank, which effectively controls the value of the euro. And just as deflation under the gold standard made it impossible for Germany (and its state and local governments) not to default on its obligations in 1931, the policy of the European Central Bank, self-righteously dictated by Germany, has made default by Greece and now Italy and at least three other members of the Eurozone inevitable…

… If the European central bank does not soon – and I mean really soon – grasp that there is no exit from the debt crisis without a reversal of monetary policy sufficient to enable nominal incomes in all the economies in the Eurozone to grow more rapidly than does their indebtedness, the downward spiral will overtake even the stronger European economies. (I pointed out three months ago that the European crisis is a NGDP crisis not a debt crisis.) As the weakest countries choose to ditch the euro and revert back to their own national currencies, the euro is likely to start to appreciate as it comes to resemble ever more closely the old deutschmark. At some point the deflationary pressures of a rising euro will cause even the Germans, like the French in 1935, to relent. But one shudders at the economic damage that will be inflicted until the Germans come to their senses. Only then will we be able to assess the full economic consequences of Mrs. Merkel.

3 thoughts on ““And they called it puppy love””