Commenting on a paper presented at the Jackson Hole gathering, Benyamin Appelbaum writes:

The paper, presented Friday morning at the annual gathering of economists and central bankers at Jackson Hole, Wyo., argues that the share of Americans with jobs has declined because the labor market has stagnated in recent decades — fewer people losing or leaving jobs, fewer people landing new ones. This dearth of creative destruction, the authors argue, is the result of long-term trends including a slowdown in small business creation and the rise of occupational licensing.

In the view of Mr. Davis and Mr. Haltiwanger, the recession just made a bad situation worse.

The economy clearly had problems before the crisis. Indeed, those problems contributed to the crisis.

But economists and policy makers will have to reconcile the assertion that these trends were the dominant factors with the reality that the employment rate rose in the years before the recession, then dropped sharply during the recession.

The new paper, like others of its genre, basically requires belief in a big coincidence: that a short-term catastrophe happened to coincide with the intensification of long-term trends — that the economy crashed at the moment that it was already beginning a gradual descent.

I view this somewhat differently.  Very often trends accumulate, often without much notice, and then a cyclical event causes that trend to explode into full view.  Such a coincidence of cycle and trend is very often no accident and in fact the two are closely related.

Let’s say, as seems to be the case, that wages stagnated, labor market mobility slowed down, and non-outsourcing productivity was slow during 2000-2007 (or maybe longer).  Those are all long-term economic trends and they are all bad news.

During 2000-2007 most Americans acted as if were are on a good trend line when in fact they were on a less favorable trend line.  This influenced spending decisions, borrowing decisions, real estate decisions, and so on.  People overextended themselves and they also created unsustainable bubbles.  Sooner or later the debt cannot be rolled over, the bubbles pop, the crash ensues, AD falls, and so on.  This often takes the form of a discrete cyclical event, as indeed it did in 2008.

One point — still neglected in much of today’s macroeconomic discourse — is that the mis-estimated trend was a major factor behind the cyclical event.  But there is yet more to say about this interrelationship between cycle and trend.

The arrival of the cyclical event, in due time, makes the negative underlying trend more visible.  At first people blame everything on the cycle/crash, but a look at the slow recovery, combined with a study of pre-crash economic problems, shows more has been going on.

Which reminded me of the RBC view that:

…the old view that long term (“potential”) growth was something smooth and slowly changing that could be analyzed separately from cycles (the ups and downs of everyday life) is probably not true. The economy should be viewed as an optimizing dynamic system constantly buffeted by shocks. In this sense, what is popularly called cycle is nothing more than the manifestation of the economy’s search of its new equilibrium growth path. If that happens to be below what many conventionally define as potential, it does not follow that the economy has somehow to rise back to it.

I don´t buy Tyler Cowen´s arguments. To me they are mostly rationalizations! 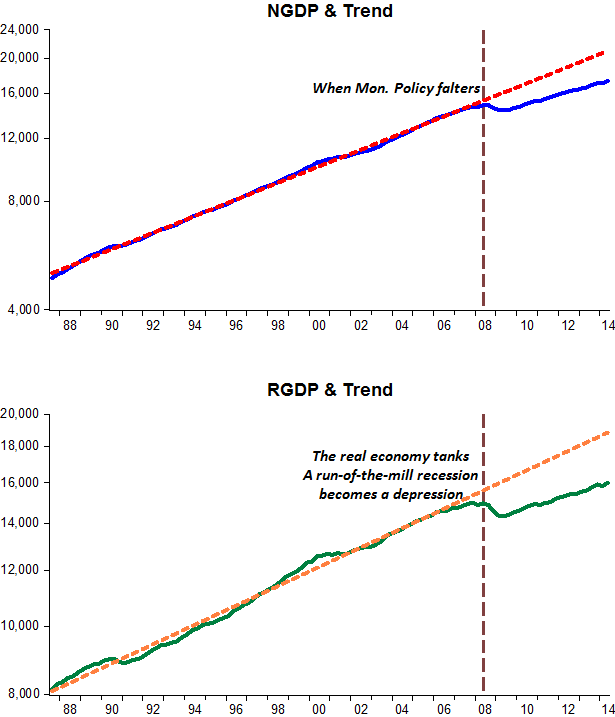 4 thoughts on “Is RBC Theory winning out?”