A marked characteristic of the post crisis period, especially in advanced economies, is that problems or issues are frequently defined as structural. It seems it is even more general than that because in a recent report on Korea, Goldman Sachs´ Asia Economic Analyst proposes the view that “contrary to the market´s general expectation that the won will likely appreciate further on Korea´s large current account surplus, we would argue that the recent increase in the surplus could be mostly structural (mainly on demographics) due to large national savings in Korea…”

According to the analysis, the current account is rising and will continue to remain high because saving will rise relative to investment due to the rising population share of ‘high and ultra-high savers’; those aged between 35 and 69 and 50-69.

The data tell a different story. As the chart shows, before the Asia crisis of 1997-98, Korea´s current account tended to be in deficit. The crisis is a watershed, with surpluses being the norm afterword. Since the ‘international financial crisis of 2008-09’, Korea´s current account surplus has risen but that appears to be due to a fall in investment and not to a rise in savings.

So it appears that the structural arguments put forth are not convincing. What about cyclical arguments?

For the past 3 years oil prices have remained relatively stable but headline inflation has fallen considerably, a clear indication that monetary policy is ‘too tight’, despite the drop in interest rates. This is another example of interest rates being a poor gauge of the stance of monetary policy.

The next chart clearly shows that when the crisis hit the actions by the Bank of Korea were in the right direction. Note that NGDP moved back towards trend. But then the mistake of reacting to the oil price rise ‘spoiled’ everything, with NGDP distancing itself, once again, from the trend level path. And despite the fall in interest rates, the gap is widening, indicating that monetary policy is still ‘too tight’. 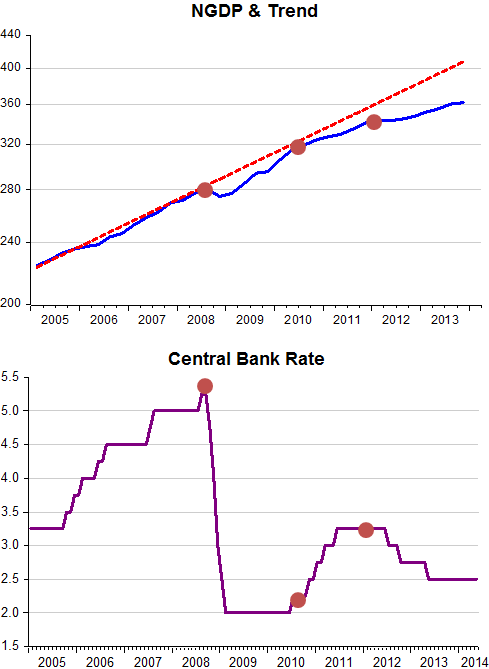 This is consistent with the observation above that the current account surplus is rising because of a fall in investment.

3 thoughts on “The ‘it´s structural’ bias”